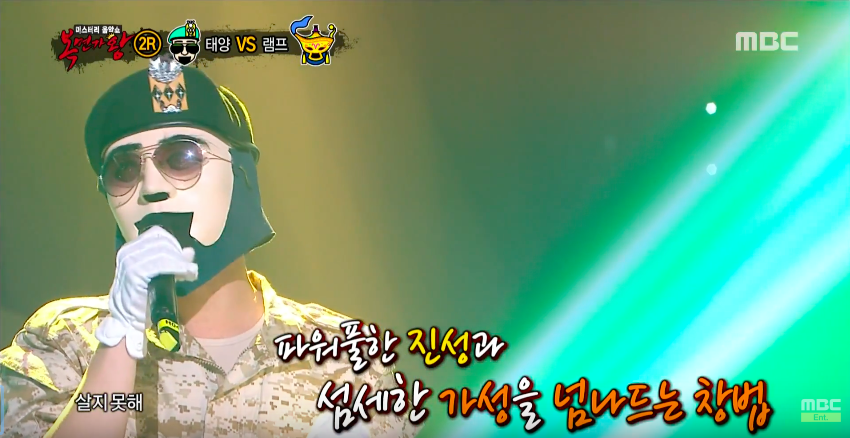 Watch: Contestant With “Descendants Of The Sun” Mask Shocks Audience On “King of Mask Singer”

The identity of “The Sun’s Junior” is revealed on this week’s episode of MBC’s “King of Mask Singer”!

On the May 22 episode of “King of Mask Singer,” the identity of contestant “The Sun’s Junior” is revealed to be none other than “Descendants of the Sun” actor Kim Min Suk.

The actor is unfortunately eliminated from the second round; however, the audience and fellow celebrity commentators are shocked at the unmasking of the owner of such a talented voice.

Kim Min Suk explains that that he used to be a trainee to become a singer. He also adds, “I also auditioned alongside singer Park Bo Ram.”

Singer Cho Jang Hyun compliments, “If you had continued on to become a singer, you would have been successful.”

Last week Kim Min Suk was able to pass the first round by beating contestant “Picky Little Prince” 58 to 41; however, this week he loses to “Lamp Fairy.”

Watch the unmasking of “The Sun’s Junior” below:

Watch his first round performance below:

Descendants of the Sun
Kim Min Seok
The King of Mask Singer
How does this article make you feel?