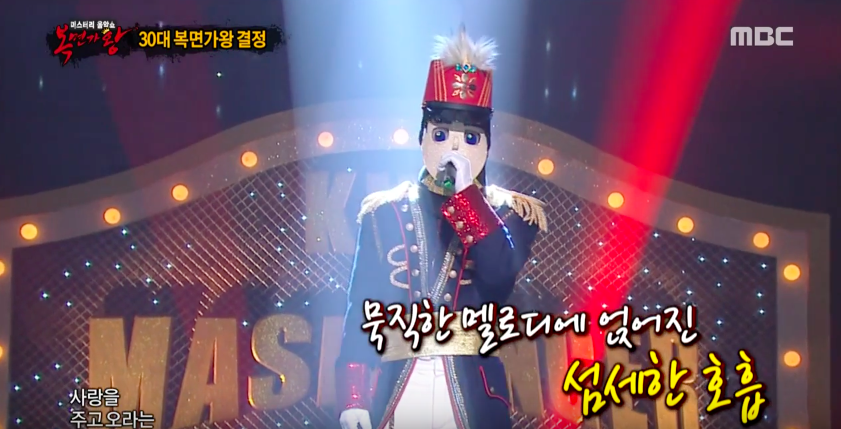 On the May 22 episode of “King of Mask Singer,” the reigning champion, “Our Neighborhood Music General,” is challenged by the next round of contestants to dethrone them.

In the first challenge of Round 2, the contestant “I Am Totally Shrill-Voiced” takes to the stage with the song “A Guy Like Me.” However, she loses to the contestant “Life of a Century,” who sang “You Are My Everything” from the “Descendants of the Sun” soundtrack, with a score of 67 to 32. “Shrill-Voiced” ends up being actress Park Bo Ram.

Park Bo Ram confesses, “When I was on an audition program, I had a nice voice. But my voice suffered as I lost weight.”

The second challenge of Round 2 sees “The Sun’s Junior” go up against “Lamp Fairy.” Although “The Sun’s Junior” performs a moving rendition of 4Men’s “I Can’t,” he ends up losing to “Lamp Fairy” with a score of 73 to 26. After his identity is revealed, Kim Min Suk says that he too initially trained to be a singer alongside Park Bo Ram.

Ultimately, “Our Neighborhood Music General” defends their crown with a moving rendition of “One Million Roses.” With the defeat, “Lamp Fairy” removes his mask to reveal that he is Kim Kyung Ho.

“Our Neighborhood Music General” takes home an unprecedented 9th win with the victory. Their impressions on the competition later was, “It seemed like I would get beat today, because ‘Lamp Fairy’ is a person who sings unimaginably well.”

Congratulations to “Our Neighborhood Music General” for yet another win under their belt! DO you think they can defend the throne for a 10th week in a row?

*A previous version of the article incorrectly named the “Lamp Fairy” contestant as Kim Young Ho. The article has been updated for accuracy.