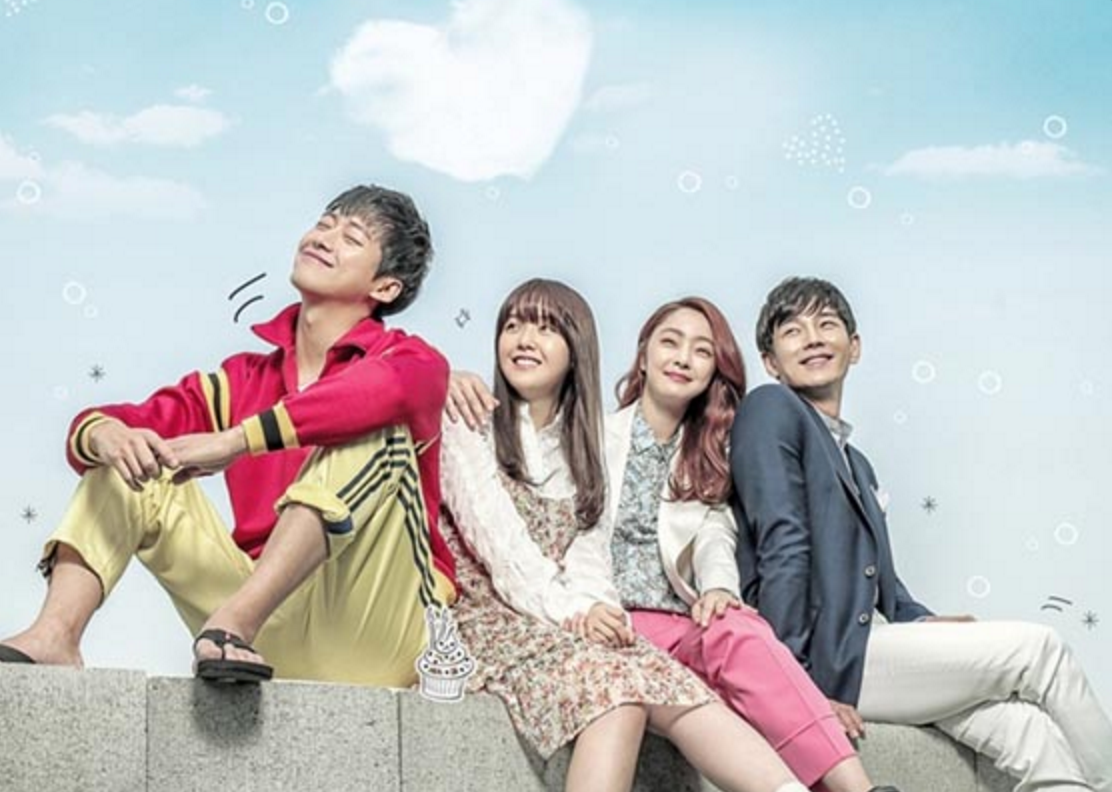 “Dear Fair Lady Kong Shim” is a new SBS weekend drama starring Girl’s Day’s Minah, Namgoong Min, Suh Hyo Rim, and On Joo Wan. Many people were in anticipation for this drama since this is both Namgoong Min and Minah’s first time starring on the small screen. There has especially been a lot of pressure on Minah, as her fellow Girl’s Day member Hyeri is also currently starring in the drama “Entertainer.” So, how is Minah doing in the drama so far? Keep reading to find out! The truth is, I had zero expectations going into this drama and I had no real desire to watch it even after seeing the trailers. Nonetheless, I wanted to give it a try, so I watched the first episode. Oddly… I found myself being sucked in. I wasn’t really sure if I liked it or not, but before I knew it, I was watching the second episode, and by the end of it, I was hooked. You know that feeling, right?

Really, everything about this drama is pretty plain and simple. The setting, the cinematography, the soundtrack, the characters, the story — nothing really sticks out as being extraordinary. So, what is it about this drama that has me intrigued? (Spoilers ahead). 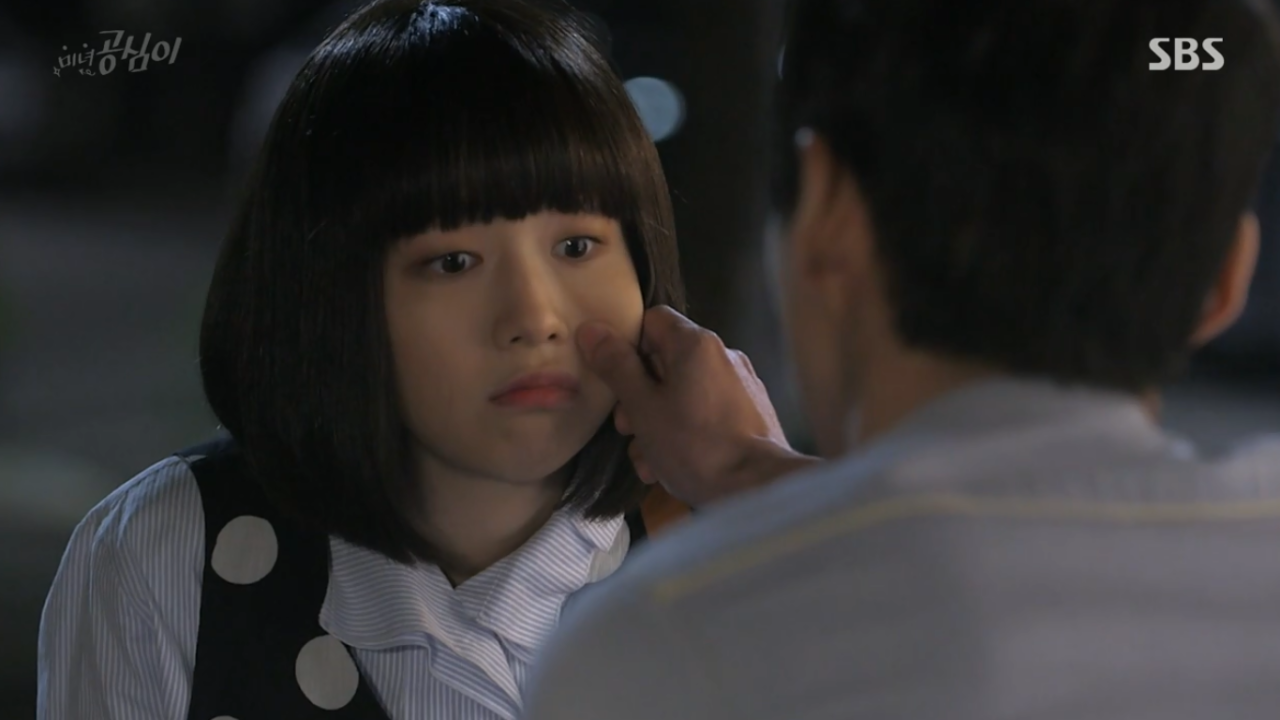 The real charm of this drama came with the development of the two main characters, Kong Shim (Minah) and Ahn Dan Tae (Namgoong Min). These two meet when Ahn Dan Tae comes to see the apartment Kong Shim is giving up for rent. Kong Shim is broke and needs the money, so she moves back in with her parents, who live in the same building. This obviously calls for a lot of random run-ins with each other at the convenience store, the park, and the street. The two characters develop a love/hate relationship with each other and thus begins the romantic part of this romantic comedy.

These two characters are incredibly quirky and it took me a full episode or two to appreciate their weirdness. I thought the character Kong Shim especially took a bit to warm up to because she’s really miserable from the get-go and I couldn’t see what was likable about her.

This is her face for most of the drama so far. 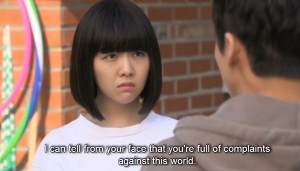 But then, there came a scene where she was drunk and insisted on playing hide and go seek on the streets of Seoul with Ahn Dan Tae. It was during this scene that I saw a glimpse of her charm. 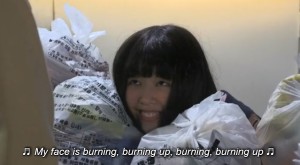 There’s just something about Kong Shim that has you coming back for more! I also started to realize that there are qualities about her that everyone might be able to relate to. And her interaction with Dan Tae becomes quite humorous and cute to watch. I love all the constant insults, yelling, and hair-pulling. 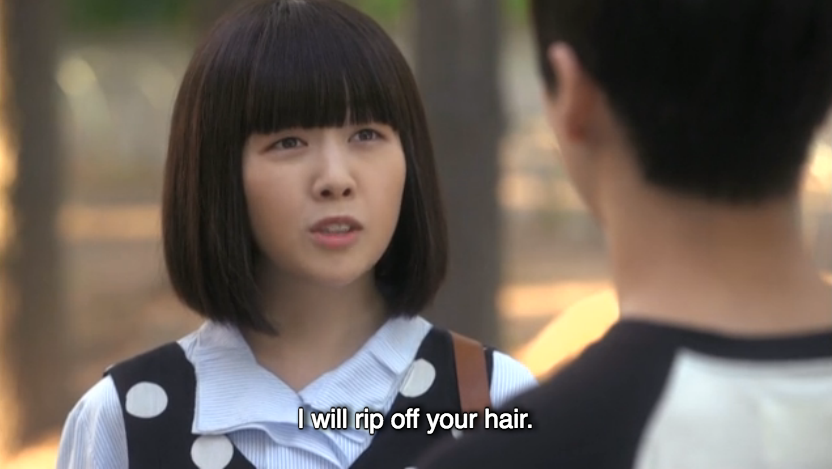 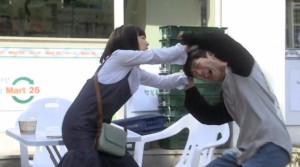 Namgoong Min’s character, Ahn Dan Tae, is also quite unique. He’s a human rights lawyer who dresses in capri jogging pants and baggy shirts to work. It’s taking me a bit of getting used to his character since I’m not used to seeing him in such an unusual role, but he’s definitely growing on me. After seeing him in such uptight and psychopathic roles, I wasn’t sure if he would suit such a light-hearted one, but it’s been a pleasant surprise. And another quirk — almost every scene he’s in, he’s eating something.

He also has a history of fighting; he even spent some time in jail when he was younger for something he didn’t do, which is why he became a human rights lawyer. Despite having fought a lot in the past, he still continues to do so, but only when he’s saving people. He has this odd ability to dodge people hitting him because his vision slows everything down.

So, the back story of Dan Tae is important. Mainly because this is where On Joo Wan’s character (yay!), Suk Joon Soo, comes in. This is probably the only reason why this family’s story is worth mentioning because I found myself a little bored with it. Long story short: Joon Soo is the youngest son of a wealthy family and his grandmother is in search of her first grandson named Joon Pyo, who went missing when he was a kid.

This missing kid is most likely Dan Tae, who can’t remember anything from when he was younger. This also means that he’s half brothers with Joon Soo. The grandmother is so fixated on the search of Joon Pyo that she totally mistreats and neglects poor Joon Soo.

But seriously, how could you be mean to a face like this? 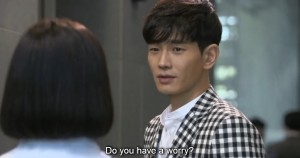 Another thing worth mentioning is that Dan Tae and Joon Soo have already met and are pretty much BFFs. I hope nothing gets in the way of this because I’m a sucker for bromance. Anyway, Kong Shim gets a job working as a secretary for Joon Soo’s dad, who is the CEO of a large corporation. This is awful because by the looks of it, Joon Soo is falling for Kong Shim. Cue second-lead syndrome. 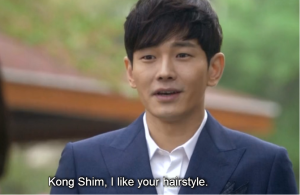 Does he mean this hairstyle? (It’s a wig, by the way.) 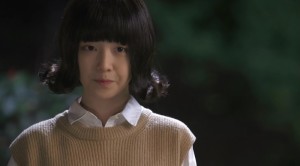 Anyway, it’s not that Namgoong Min’s character isn’t charming and everything, but when a wealthy, smart, endearing man starts to take an interest in a girl who is weird, poor, has low self-esteem, and an odd haircut, we can’t help but swoon! 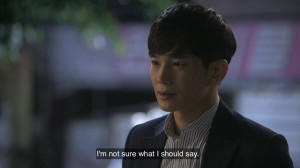 Nothing. You don’t have to say anything.

Kong Shim has an older sister, Kong Min, who is a lawyer. In comparison to Kong Shim, she has always been the prettier, more successful sister, but she’s also manipulative, conniving, and mistreats her little sister, so we don’t like her. She also ends up falling in love with Joon Soo, which is amazing because Joon Soo is already falling for Kong Shim. Are you following? Because now, this love triangle has turned into a love square.

All in all, everything about this drama is simple, but really enjoyable to watch. I know some people were concerned about the age difference between the two main actors, but I didn’t find myself getting distracted by it as much as I did for “Entertainer.” I’m looking forward to seeing how intense this love square gets and how far the characters are willing to go for love. Yay for the unpopular girl getting some love! Thanks for the unexpected surprise, “Dear Fair Lady Kong Shim!” Can’t wait to watch episode 5 and 6 this weekend!

One more of On Joo Wan just ’cause.

What do you Soompiers think about this drama so far? Let me know in the comments below!

binahearts is a Soompi writer who loves to spend her free time immersed in all things Korean- dramas, movies, K-Pop, and beauty products! Her favourite actors are Won Bin, Lee Min Ho, and more recently, Song Joong Ki. She also loves watching most variety shows and has claimed to have watched every single episode of Running Man. Some of her favourite K-pop artists include a lot of old-school groups like, Sech Skies, g.o.d, and Jinusean. As for more recent groups, she likes Dean, BIG BANG, Akdong Musician, and GOT7. When she isn’t watching the latest drama series, she can be seen indulging in her favourite hobbies which include singing her heart out at karaoke, photography, playing with her dog, and eating dessert!