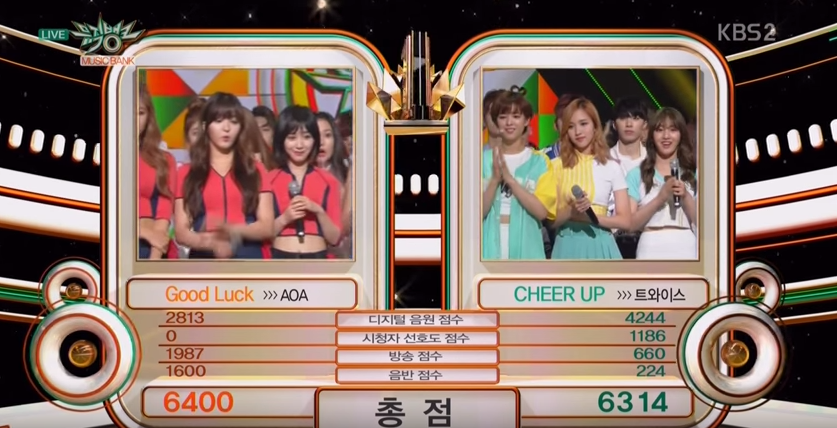 KBS Admits Mistake In “Music Bank” Winner, TWICE Is No.1, AOA Is No. 2

KBS’s “Music Bank” producers admits that there was a mistake regarding the May 27 episode‘s winner (for the last week of May).

For the May 27 episode of “Music Bank,” TWICE and AOA competed for number one. At the end of the show, AOA was announced as that week’s winner, with 6,400 points for their latest track “Good Luck.”

Since then, there has been controversy over AOA’s win, with many finding the album scores problematic. “Music Bank” calculates the winner based on four factors – digital sales (65 percent of total score), viewer votes (10 percent), broadcast scores (20 percent), and album sales (5 percent).

For album sales scores, KBS had:

The scores were strange because MONSTA X sold more than I.O.I, but I.O.I was given 1,523 points, while MONSTA X got a lower number – 999 points. MONSTA X also only had 2,000 album difference in album sales from AOA, but the point difference was over 600. When you compare the other scores, the proportion doesn’t add up.

KBS admitted there was an error made by the person in charge of the scores as they were inputing them into the excel sheet. It apologized for the error, saying, “It is clearly KBS’s fault” and that “it will do its best to make sure something like this doesn’t happen again.”

In an additional statement, producer Shin Mi Jin of KBS said to OSEN that they will not be taking the trophy away from AOA to give to TWICE. Instead, TWICE will be getting a new trophy. Producer Shin stated, “What’s important is not the physical trophy, but comforting the members of TWICE and AOA, who were hurt with this mixup.”

TWICE
AOA
Music Bank
How does this article make you feel?