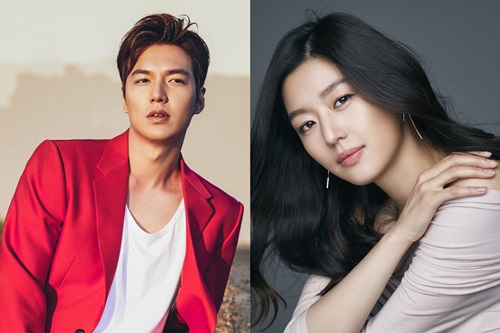 Although news has been coming out as if it was confirmed previously, it was mostly from the mouths of industry insiders. Now there is actual confirmation from the drama’s production company, as well as a schedule and broadcasting station.

The drama, with the working title “Legend of the Blue Sea,” will star Lee Min Ho and Jun Ji Hyun, airing on SBS, Wednesdays and Thursdays, starting in November. It is slated to premiere after the end of “Incarnation of Envy.” The drama is a fantasy romance, taking its motif from the mermaid/merman story in Korea’s first historical (romance) storybook. In the Joseon-era storybook, it is recorded that real-life figure Kim Dam Nyeong returned mermaids/mermen that were caught by fishermen back to the sea.

Writer Park Ji Eun previously wrote the hit drama “My Love From My Star,” which also starred Jun Ji Hyun, working alongside Kim Soo Hyun. The director of the new drama is Jin Hyuk, who has worked with Lee Min Ho in the past on “City Hunter.”

The production company, Culture Depot, stated, “From the beginning stages, writer Park Ji Eun created characters matching Jun Ji Hyun and Lee Min Ho, thinking of them as the best couple. The lead actors also decided to work on the drama because they believe in the writer and the director. You can look forward to their chemistry, which will be beyond one’s imagination.”