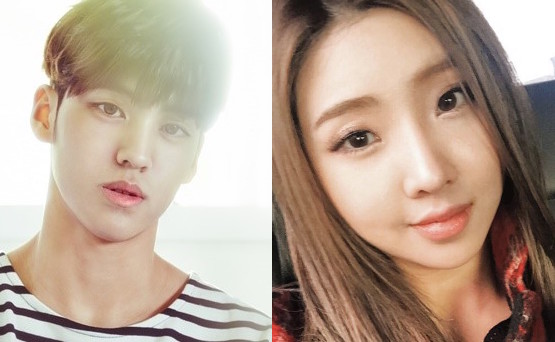 Before the release of his new solo track featuring BTOB’s Minhyuk on May 30, Song Yu Vin (also spelled Song Yu Bin) sat down for an interview with X Sports News, during which he talked about how excited he is to meet his new label mate Minzy.

Minzy recently withdrew from YG Entertainment girl group 2NE1 after her contract ran out, and joined the agency Music Works, which Song Yu Vin is also housed under.

Although Song Yu Vin just debuted as a solo artist, the former “Superstar K6” contestant will be promoting next year as a member of the upcoming idol group My Teen. It’s been announced that Minzy will be helping out the group by training them.

“I still haven’t had the chance to meet Minzy,” says Song Yu Vin in his interview. “I want to meet her soon and ask her to teach me how to dance, or about performing. Since it’s been nine years since she debuted, I think everything she says will be a huge help to me.” Minzy in fact made her debut in 2009 with 2NE1.

He says, “The staff who’ve met her all have great things to say about her. They say that she’s a really great person. When I ask why she seems that way, they say she’s really considerate.”

“She seems so cool,” Song Yu Vin adds. “Even though she’s been in the business for nine years, they say she seems like the nicest person. I can’t wait [to meet her].”

Song Yu Vin
2NE1
Minzy
MYTEEN
How does this article make you feel?