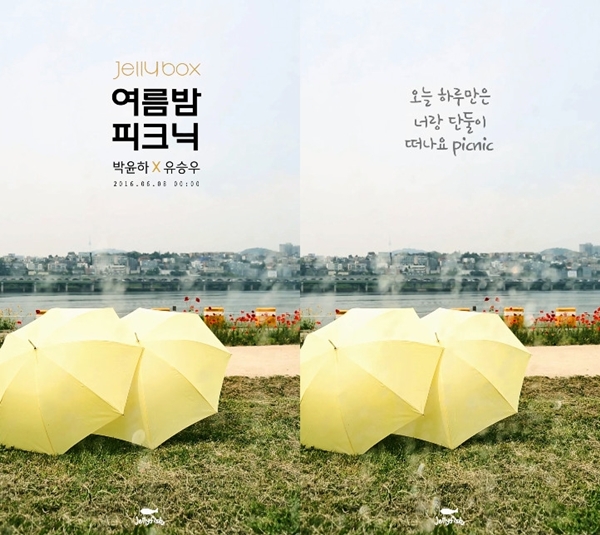 Jellyfish Entertainment reveals a video teaser for its first single from its new inaugurated JellyBox music channel featuring singers Park Yoon Ha and Yoo Seung Woo. They sing “Summer Night Picnic,” which will be released June 8, 2016 at midnight. Watch the teaser below.

Jelly Box is Jellyfish Entertainment’s own music channel, bringing together music and artists of different genres and groups in new songs.With the creation of its music channel, the agency hopes to broaden its musical influence.

Jellyfish entertainment houses artists like Sung Si Kyung, Seo In Guk, Park Hyo Shin, and VIXX. Prior to the music channel, through Jellyfish Entertainment, VIXX’s Leo and singer Lyn released a duet “Blossom Tears,” and Seo In Guk and rapper Verbal Jint released their collaboration single “I Can’t Live Because Of You,” which was a part of a project headed by the agency called “Y.BIRD From Jellyfish.” The agency has also released Christmas carol projects since 2010.