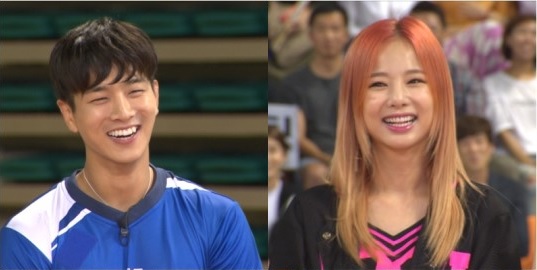 EXID leader Solji is all praises for MADTOWN’s Jota on KBS2’s “Cool Kiz on the Block.”

On its June 7 episode, “Cool Kiz on the Block” sets out to for its second nationwide tour together with EXID.

Host Kang Ho Dong expresses his gratitude to the girl group for coming all the way to Busan to film. Solji reveals she is a fan of the show and says, “I’ve been following ‘Cool Kiz on the Block’ ever since the judo special.”

Hearing this, Oh Man Suk teases the singer and asks, “What looked good specifically, the uniform or Jota’s muscles?”

He continues, “What are you going to do now that Jota’s already married?” referring to his virtual marriage with model Kim Jun Kyung on MBC’s “We Got Married.”

Solji cracks everyone up when she becomes flustered and clarifies, “I meant the way he played judo looked good, not his body.”

EXID
Cool Kiz on the Block
Madtown
Jota
Solji
How does this article make you feel?