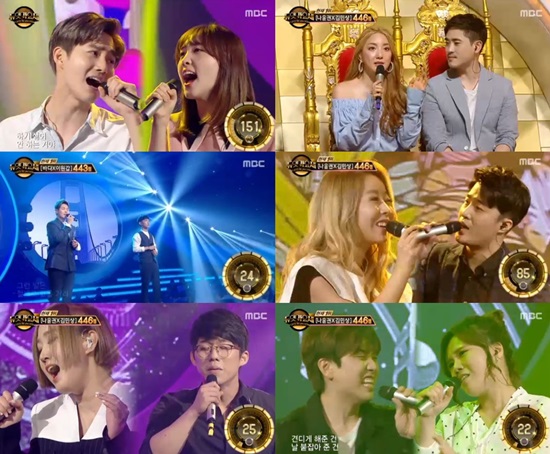 Suho and his partner Lee Sae Rin was up first with his romantic musical-like performance of Kim Hyun Chul’s “What’s The Matter.” Following his performance was Bada and Lee Won Gab’s rendition of Jang Soo Ra’s “Delight.” Then Na Yoon Kwon and Kim Min Sang impressed with their cover of Hwayobi’s “Something Like That.” After that, Yangpa and Park Sung Eun sang Park Hyo Shin’s “Wildflower.”

So Chan Whee and Kim Min Jae, who won last week, sang Lee Seung Hwan’s “For 1,000 Days.” Finally, Sandeul and Jo Sun Young sang Lim Jung Hee’s “Music Is My Life.” They won with 451 votes and got their fourth win on the show, achieving a new record.