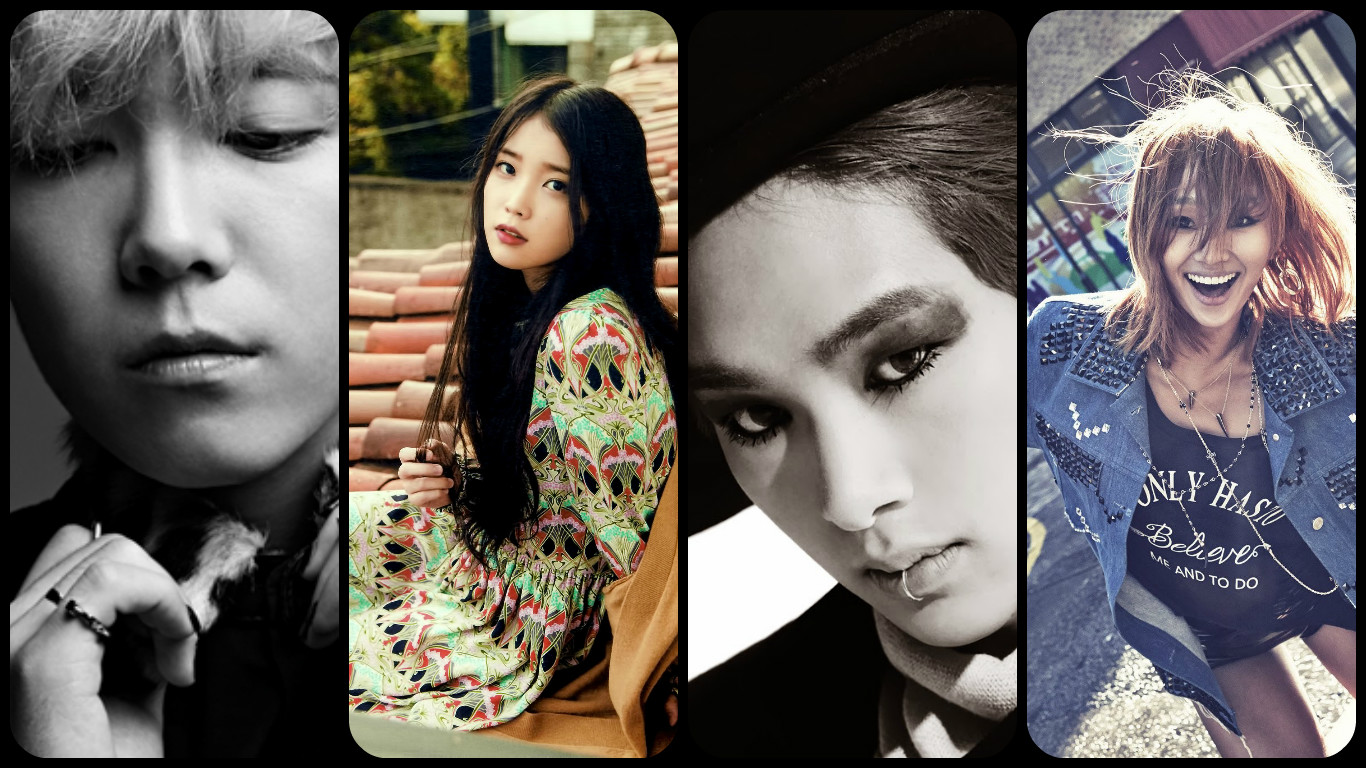 The 14 Most Unique Voices In K-Pop

The diversity of K-pop is part of what makes it shine from Korea to all four corners of the globe. Voices of all sorts have made themselves known, and some of those voices are so wonderfully singular that they are identifiable within a few seconds of listening to them. They are the voices that make eyes widen in instant recognition. Let’s take a look at 14 of the most unique crooners, rappers, and belters in K-pop that fans all over the world know and love.

g.o.d’s Kim Tae Woo is one of the original K-pop idols and he certainly shines as a sunbae with a strong, clear voice and an ability to hit high notes with amazing alacrity. His thick tenor tones are clearly identifiable as he croons or belts on a solo stage, in tandem with g.o.d or, like the video below, in a funky duet with the fun and furious Jay Park.

(Listen to how strong and straight forward his vocals are in “Lonely Funk” featuring Jay Park. The clarity of his vocal timbre is what makes him so unique.)

A Pink’s powerhouse vocalist Jung Eun Ji isn’t just a young woman with a big voice, she is also one who possesses a vocal quality that makes her special. She has husky tones that are also reflected in her adorable Busan-accented speech. This quality gives her voice an otherworldliness that makes me want to listen to it for days and days.

(Eun Ji’s title track off of her first solo album, “Hopefully Sky” featuring Harim, is a sweet tune where this belting queen gently pours out her soul. Even when she isn’t singing on the louder side of the spectrum, this talented lady’s husky tones are still captivating.)

Funktastic singer Zion.T has one of the most distinctive voices in K-pop. His tenor vocals are tight, his rapping is high-pitched, wickedly timed, and he has this amazing nasal quality to his sound that makes him identifiable anywhere he performs.

(Zion.T’s 2015 single “Eat” shows off that even in slower, more pensive tunes, the performer retains his unique vocal delivery and special vocal timbre.)

IU has a deceptive voice. It’s breathy and seems as though it’s a very small instrument. But her ability to phrase lyrics and musical lines with cute twinges of aegyo, the use of her distinctive breathy quality for unique phrasing, and her surprising entrances with sudden big sounds that create unexpected solid tones is what makes her such a unique singer. As she has matured, she has only furthered her abilities to use her awesome instrument.

(Check out her hard-hitting single “Twenty-three” where she is using a mix of vocal technique, spoken word, breathiness, and full-bodied 23-year-old power to tell her tale of growing into a young woman.

SHINee’s leader Onew, like Kim Tae Woo, has a full-bodied, straightforward vocal instrument that cuts to the hearts of notes and, of course, straight into our swooning souls. Easily identifiable, this unique K-pop voice is most distinguished by its thick tone and penchant for blues notes.

(Check out Onew’s brave rendition of staple operatic tenor aria, “Nessun Dorma” from Puccini’s Turandot. Listen for purity of tone, power of breath support, agile climbing up and down his vocal range, and thick, solid vibrato.)

This divine solo singer has a wide vocal range that glimmers with metallic power, especially in her rare lower register. In no way does that statement intend to neglect her amazing belt that resonates with a husky richness that has touched audiences again and again.

(Ali’s rendition of “Does Anyone Know This Person” has Argentine undertones and Ali performs it with intense vibrato, a pointed sound, and a huskiness that grows as her dynamic grows.)

BIGBANG’s leader, rapper, singer, and fashion icon G-Dragon is, if nothing else, one of a kind. His intense, high-pitched voice makes for unique, piercing rap sequences, and quickly identifiable vocalizations. His voice isn’t just limited to that, however. When he delves into his lower register, especially for some down and dirty rapping, he works in an amazing breathiness that makes this K-pop icon a unique voice to contend with.

(“One of a Kind” shows off not only G-Dragon’s unique music style, but also his ability to manipulate his voice and his rapping into the distinguished sound we can identify within seconds of hearing it.)

Former Girls’ Generation singer and current solo artist Jessica has one of the most identifiable voices in K-pop. It has metallic intensity, rapid vibrato, and a wonderful comfort in her upper register.

JYJ’s XIA Junsu is one of the most unique tenor voices on the market. It has a rare slinkiness to it that manifests best as travels up and down his vocal range from rigid highs to full-throated lows. He has an intensity to his vocal quality that is strangely complimented by a breathiness in his mid-register.

(Check out this crazy number, “Tarantallegra,” where Junsu shows off his powerful upper register in contrast to guest rapper Flowsik.)

One of the most well-known female singers in K-pop is not just a strong vocal, but a special one as well. Girl’s Day’s Minah has a remarkable handling of her entire vocal register that is tinged by a gorgeous huskiness akin to A Pink’s Eunji. Unlike the lovely Eunji, the huskiness isn’t always present, giving her a unique ability to travel in and out of huskiness as she shapes her vocal melody.

(“The Guy Who Left Me,” a touching ballad, is performed by Minah with agility and her usual sense of flair. Listen for her transitions from clear high notes to husky entrances of melodic punctuations.)

BIGBANG’s man of multi-talents has one of the most unique baritones in the business. T.O.P knows how to dig into his lower register and deliver full-bodied raps that counter his leader’s headier rapping style. What makes his voice so much fun to listen to is its ability to play around with lower notes that aren’t normally found in the K-pop that reveres belting power houses and crooning balladeers.

(T.O.P’s “Doom Dada” music video is as special as his voice. Listen to how he plays with his lower registers, dipping into his bass range and dancing around different vocal qualities to create a fun, crazy song.

Although Lim Kim isn’t a huge voice, she is the epitome of unique. Her voice is light, agile, and akin to Norah Jones. She understands how to play with the different tonal colors found in her pure and natural palette. Her phrase delivery is a combination of a swaying lilt unique to her voice and her special grasp of how to infuse breathy sounds into her singing.

(Lim Kim’s “All Right” is a quirky number that proves that voices traveling off the beaten path can funk it up just as well as the powerhouses on the market.)

A list of unique voices would be totally amiss without the soulful tones of FTISLAND’s Lee Hong Ki, the quintessential husky rock voice with agility that belies the power of his instrument. His voice took the world by storm when FTISLAND debuted and has only grown since. On top of the raw power, he has wide, captivating vibrato, and a cute little aegyo drawl that flows through his verses.

(Check out Lee Hong Ki’s “Insensible,” the title track off of his first solo album. It perfectly shows off what makes Lee Hong Ki one of the most unique voices in K-pop. He has raw rock power not often found.)

Hyorin of SISTAR is a voice that cannot be left out. Like Lee Hong Ki, her huskiness and power defines her vocal quality. She is so intensely smoky in timbre that her voice is haunting. In her instrument there is also the ability to transition between the hoarse, the solid, and her wide register. Not to mention that when she sings, she’s just full of soul that crackles in her melodies and runs.

(Listen to her sing the staple “Fate” with agility, grace, and her trademark smoky tones. I particularly love this performance because she colors her voice to match the traditional Korean instruments and then the modern instruments.)

Soompiers, who do you think has the most unique voice in K-pop? Let us know in the comments below!

Raine0211 is a lover of all things Korean, especially K-pop, K-drama, and Korean food. When she’s not writing for Soompi, she’s playing the cello and singing. She happily indulges in all kinds of K-pop, but her biases are SHINee, INFINITE, and VIXX. She lives with her sister and her two cats, Timmy and Momo, all of whom also love K-pop and K-dramas.