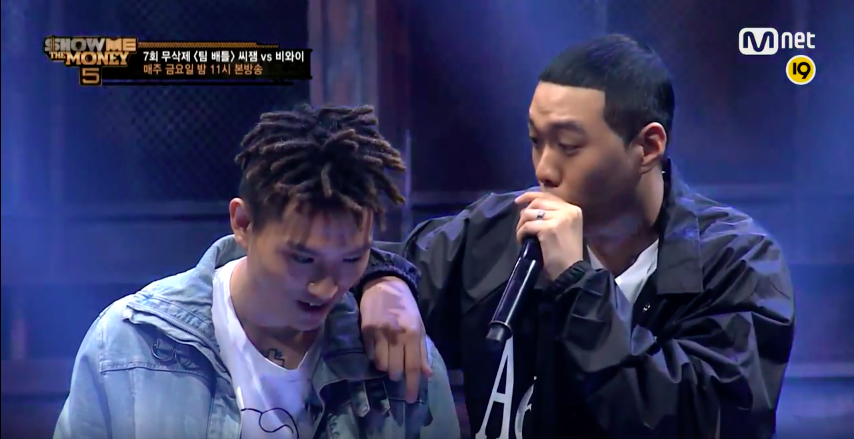 Watch: Contestants Heat Things Up During Diss Battles On “Show Me The Money 5”

On the June 24 episode of Mnet’s “Show Me the Money 5,” the four teams deuce it out in heated diss battles.

Simon Dominic & Gray team chose to compete with Zion. T & Kush, which left the Gil & Mad Clown and Dok2 & The Quiett teams to battle each other. Each contestant chose an opponent on the other team to rap against, making for a three round rap battle for each team.

During the battle between teams Gil & Mad Clown and Dok2 & The Quiett, the line up was Donutman vs. Flowsik, Boi B vs. myunDo, and #Gun vs. Superbee. Flowsik and Boi B gave impressive performances, making the battle look like a tie. However, despite spilling the beans on Superbee, who called #Gun to cut a deal, #Gun forgot his lyrics and could not finish his rap, which gave his team a disadvantage. Dok2 & The Quiett team won with a four point lead.

The battle line up between teams Simon Dominic & Gray and Zion. T & Kush consisted of ONE vs. Xitsuh, G2 vs. Reddy, and the highlight, BewhY vs. C Jamm. Xitsuh redeemed himself with what he does best, while ONE made mistakes in his lyrics. G2 also stumbled, while Reddy gave a clean delivery including surprisingly harsh words. BewhY and C Jamm, both gave impressive performances, but it was mutually agreed upon that BewhY won this battle. However, because of ONE and G2’s mistakes, Zion. T & Kush team came out on top with a huge lead.