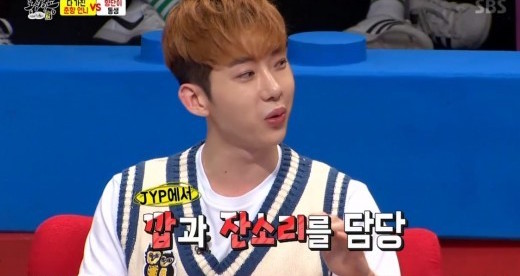 On the June 27 episode of SBS’ “Same Bed Different Dreams,” a pair of sisters who are both studying pansori (Korean musical storytelling) appear as guests.

The younger of the sisters is on the show to get help for her overbearing sister who nags her about practicing.

Appearing as a panelist on the show, Jo Kwon speaks up from the peanut gallery to side with the older sister on this one. “I am the only son in my family, but I think I understand the older sister’s heart,” he says.

“Because I was a trainee since I was young, I find myself being naggy too,” he says, referring to the many dongsengs (younger people who are like siblings) around him by virtue of having trained at JYP Entertainment for a long time.

Kim Gura interjects, “Yea, I heard you nag like crazy at JYP! Kids like Jeong Jinwoon are really scared of you!”

“I give a lot of advice [to my hoobaes] too. I think that either the younger sister is lazy, or there’s something that’s causing the older sister to be naggy,” Jo Kwon says.

Same Bed Different Dreams
Jeong Jinwoon
2AM
Jo Kwon
How does this article make you feel?