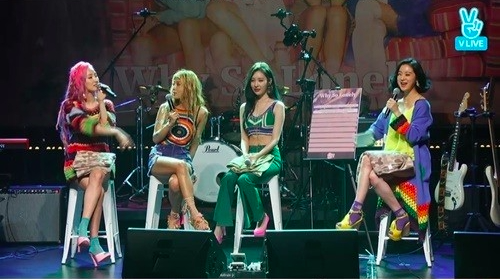 On July 4, girl group Wonder Girls made an appearance on “Wonder Girls Live Premiere” through Naver’s V App to promote their comeback. They reveal that they are “slightly disappointed at Park Jin Young. Our teasers and Unnies’ teasers were revealed on the same day, but he posted about Unnies on SNS.”

They add while laughing, “We will watch when our song is released today. He seems to care for Unnies more than us.”

“This is the first time promoting under a title song we wrote on our own. Park Jin Young announced he wouldn’t be writing a song for us, so we made a team and produced songs.”

Hyelim states, “We wrote the follow up track for our album last year and Park Jin Young was extremely satisfied. I think he developed trust after that.”

Park Jin Young seems to have responded to the girls through his personal Instagram account. On July 5, he uploaded a picture of the group’s new title track with a supporting caption in both English and Korean below.

The Wonder Girls will be releasing their new reggae-pop-themed song “Why so Lonely” on July 5.

Support the artist by buying “Why from YesAsia

Park Jin Young
Wonder Girls
How does this article make you feel?