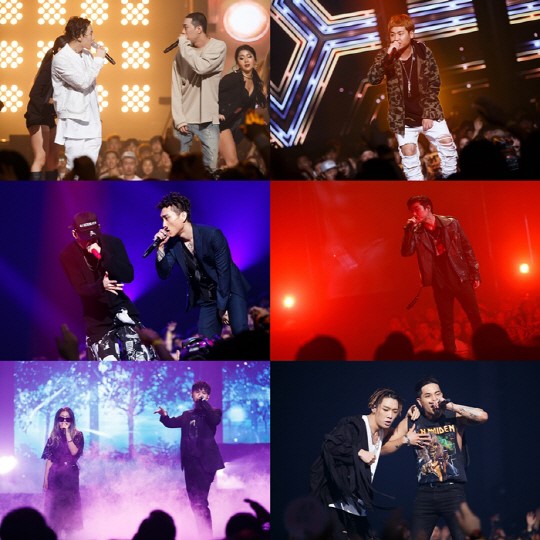 On July 8, the top six contestants on Mnet’s “Show Me the Money 5” battled it out during the semi-finals. By the end of the episode C Jamm, Superbee, and BewhY are the last three contestants standing, making their way to the finals.

The first round of performances are between C Jamm and #Gun. Although #Gun gives a solid performance, coordinating perfectly with a recorded video of guest performer Jessi, C Jamm is able to excite the crowd with his collaboration with Block B member and past producer of the show, Zico. C Jamm falters with his lyrics during the performance, but manages to beat #Gun by a slight difference.

The second round of the episode featured Xitsuh and Superbee. Xitsuh put on an emotional performance, while sharing his honest experiences. Superbee turned the mood up by putting on a shark hat and collaborating with rapper Microdot for a fun-filled and energizing performance. The audience voted in Superbee’s favor.

Contestants BewhY and Reddy battle it out for the last round of the semi-finals. BewhY begins his performance by rapping while playing the piano along with a violin, viola, and cello ensemble. He turns the mood around with a funky beat, dancers, and guest performer Jay Park. Reddy powerfully performs alongside iKON member and winner of “Show Me the Money 3,” Bobby. However, BewhY ends up winning by a landslide.

Unfortunately, Gil & Mad Clown’s team is eliminated with #Gun’s departure. The final episode of “Show Me the Money 5” will air on July 15 at 11 p.m. KST.

Watch the semi-final performances below!