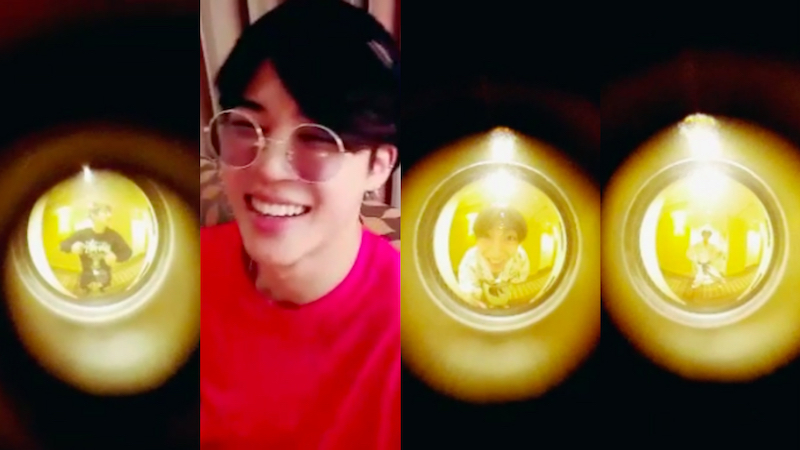 BTS’s Jimin has a great time ordering around his fellow members Jungkook and V as they try to join him on his latest live show!

The show aired live on Naver’s V app on the evening of July 13, and starts off with Jimin talking to fans in his room right after their concert in Osaka. Jimin explains that he stopped doing his dialect lesson show with V because V has said he doesn’t want to do it anymore, but Jimin’s now decided to take it up on his own with plans to invite guests. “If V says he wants to join again, I’ll say he can’t!” says Jimin. 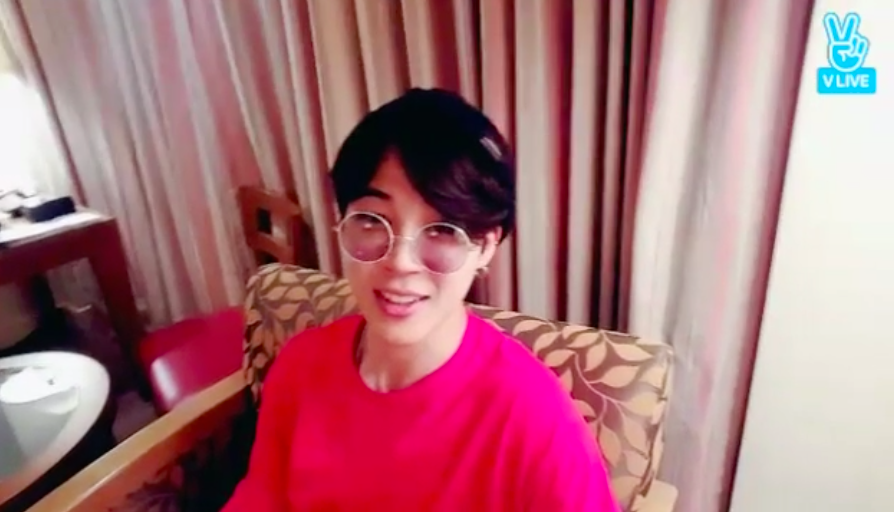 Soon after announcing this, Jimin gets a text from V while he’s talking, asking him if he’s going to be on the show too. “What are you talking about!” says Jimin with a laugh, and throws his phone. “I don’t want that!”

Jimin then pulls out a book he’s bought for teaching phrases from the Gyeongsang dialect. But as he’s starting to teach fans, someone starts ringing his doorbell incessantly. When he goes to see who it is, it’s none other than Jungkook, who we can see through the peephole. 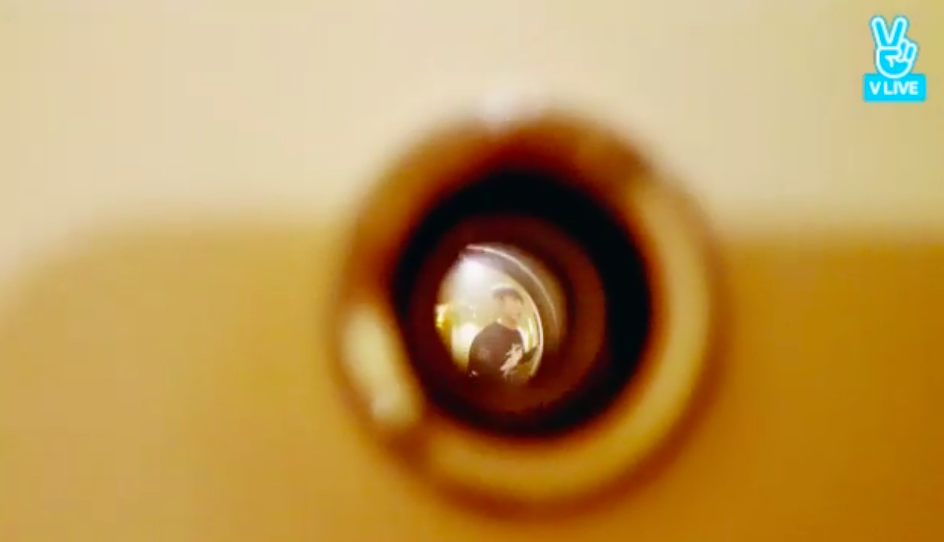 “Dance and I’ll let you in!” says Jimin, and although Jungkook refuses at first, he gives in and dances a bit from “Fire.” “Good job,” says Jimin as he cracks up. “Now do ’Butterfly.’” 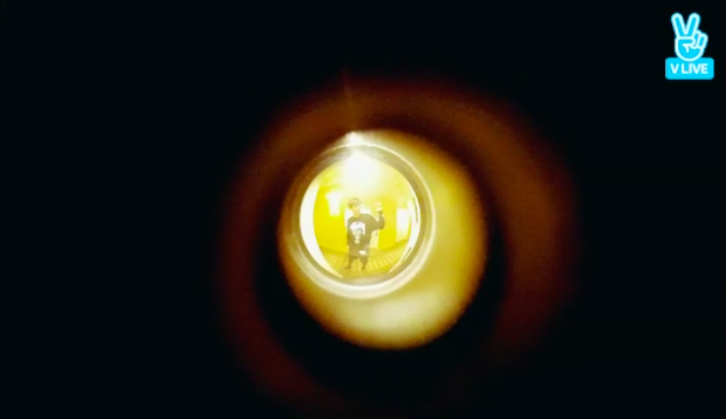 Jungkook acquiesces and does a part of the dance, gaining entry into the room! 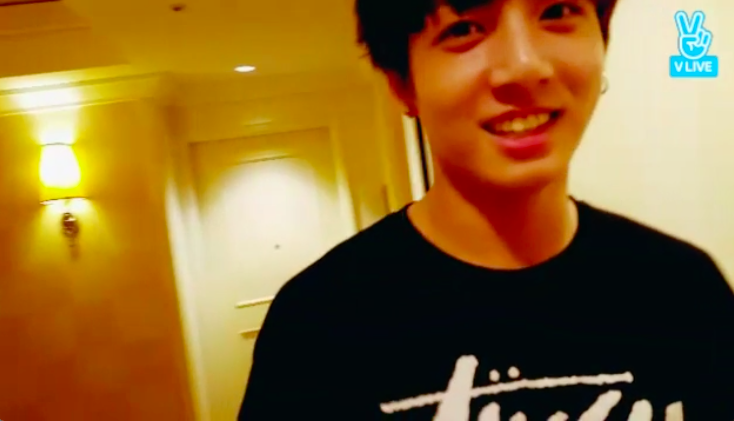 After a bit of a dialect lesson from the duo, Jungkook hears a noise outside their door, and goes to see who it is. “Be quiet, and if it’s V, just come back,” whispers Jimin. “If it’s Jin or J-Hope, open the door.” 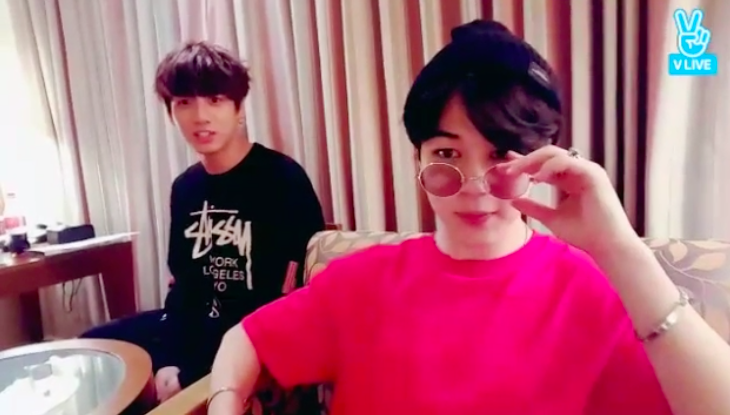 It’s Jin at the door, who enters with a tray full of ramyun and other snacks that he’s prepared, and the show quickly transforms into a spontaneous “Eat Jin” special (Jin’s mukbang show) with guests Jimin and Jungkook. But as they’re settling down to eat with their snacks and bento boxes, and Jin is entertaining himself to no end by making food puns, the doorbell rings. And rings, and rings, and rings. 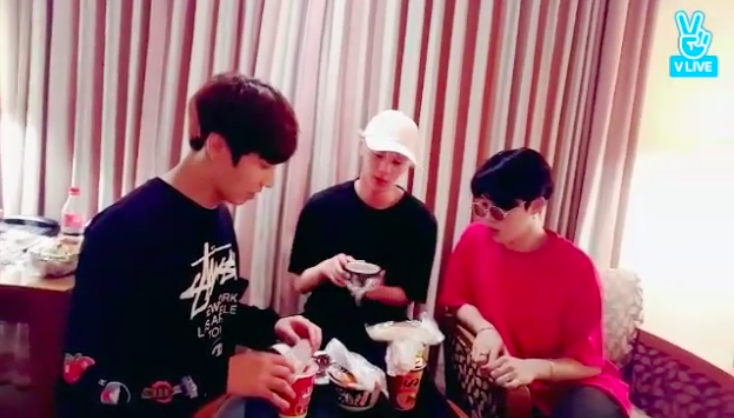 Jimin knows it’s V, and the guys yell at each other through the door, with Jimin trying to trick V into thinking they’re done with the show. Eventually he gives in and goes to the door, and tells V they’re filming him through the peephole, which seems to delight V. “Dance,” says Jimin. “‘Butterfly’! Dance! No wait, ‘Fire’! Dance!” 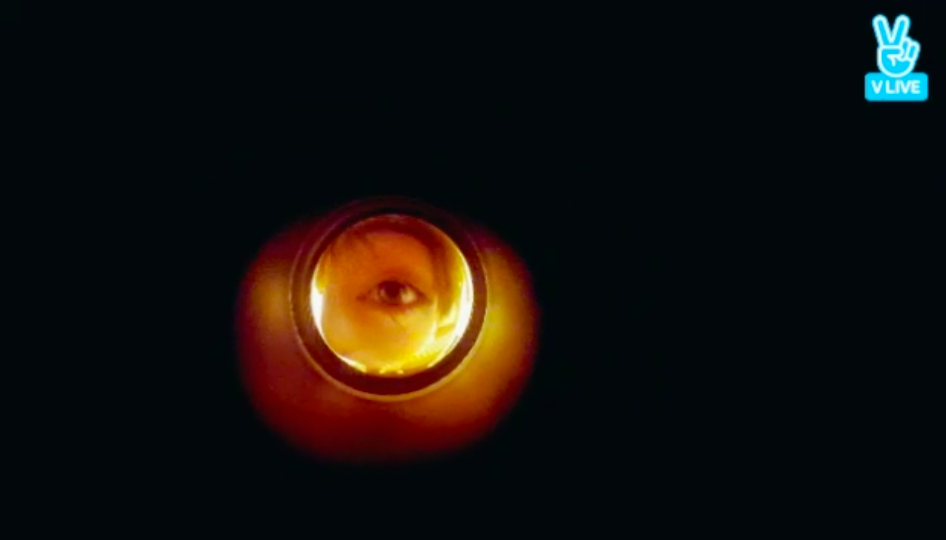 He then orders V to sit on the opposite side of the hallway. V follows his orders without any protest, and is soon dancing to “Fire” without the music on his own in the hallway. “Ah, he’s cute. Good Job!” says Jimin, and then tells him to go back to his room. 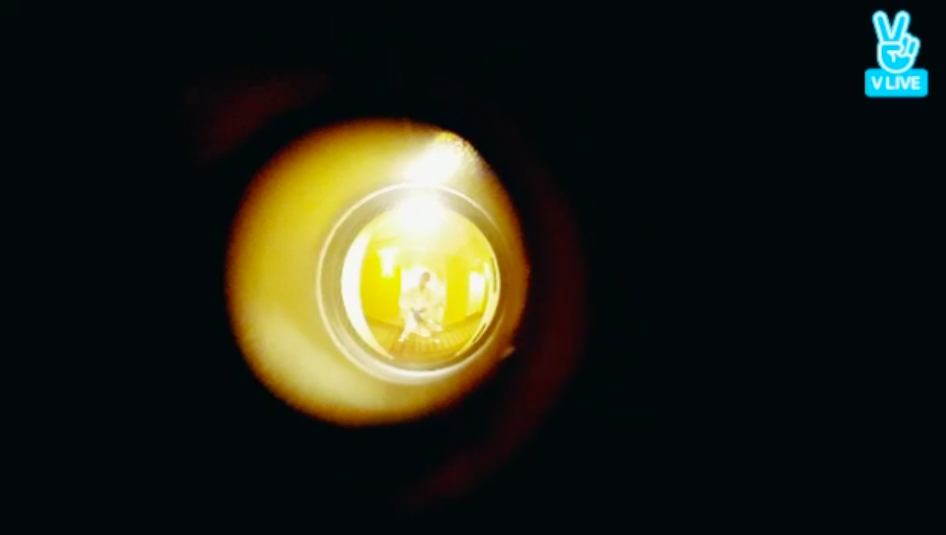 Eventually, Jimin opens the door a little to let V say something, and gets a surprise when J-Hope is suddenly there too, jumping excitedly next to V. “I brought my horse,” jokes V. “My pokémon. He’s called J-Horse.”

J-Hope heads back to his room, and the guys give in and let V enter, after telling him to go get his bento box first. They spend the rest of the show digging in together, and as they’re eating, V explains that he’s not doing the dialect lesson show anymore because he’s trying to avoid using his dialect. The guys quarrel and joke as they eat, and then wrap up the show until next time! 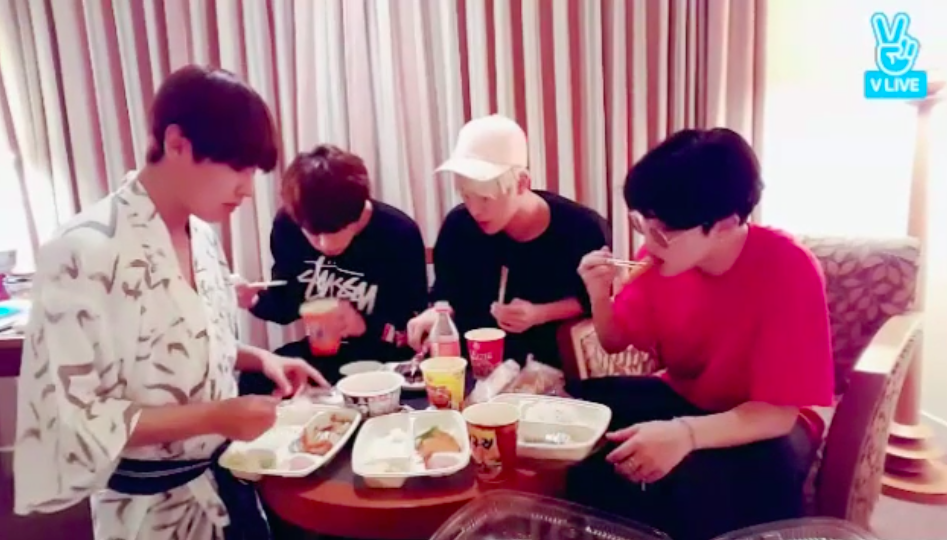 Watch all the fun for yourself in the full episode here.

Support the artist by buying BTS – Young Forever from YesAsia
BTS
Jungkook
Jin
Jimin (BTS)
V
How does this article make you feel?