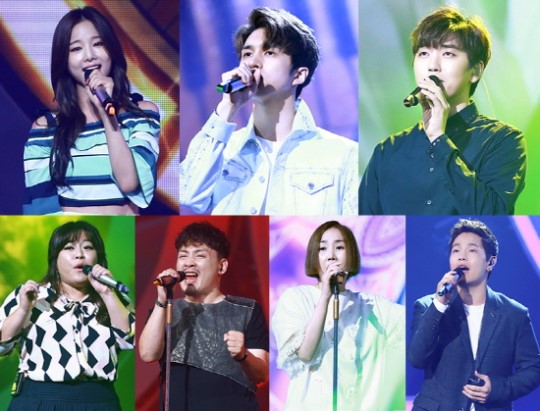 “Duet Song Festival” has invited back some of its most memorable winners for its “King of Kings” special!

July 22’s episode features duet performances by fan-favorite former contestants, including EXID’s Solji, VIXX’s Ken, B1A4’s Sandeul, Lee Young Hyun, So Chan Hwee, Na Yoon Kwon, and Hyun Jin Young. It’s the first in a two-part special, with the combined votes from both the first round this week and second round next week determining the overall winner.

“Duet Song Festival” features celebrity singers pairing up with talented non-celebrities to perform duets, with the winners each week decided on by votes from the audience. On this special episode, the professional singers have returned with their partners with the aim of wowing the crowd and taking home a particularly special win.

Na Yoon Kwon is up next, and earns 406 points for his sorrowful cover of Lee Jung Bong’s “How Are You?” with partner Kim Min Sang.

Solji and her partner Doo Jin Soo then show off their chemistry with their romantic cover of Deux’s “In Summer,” and take 402 votes.

VIXX’s Ken is next up with his partner Choi Sang Yeop to sing Kim Hyun Sik’s “Like Rain, Like Music.” The pair are awarded 429 points.

Four-time winner B1A4’s Sandeul then takes to the stage with his partner Cho Sun Yeong, and the pair perform Lee Juk’s “Shall We Walk Together?”. Their beautiful harmony earns them 436 points, and puts them in second place so far.

Watch all the performances in the episode below!