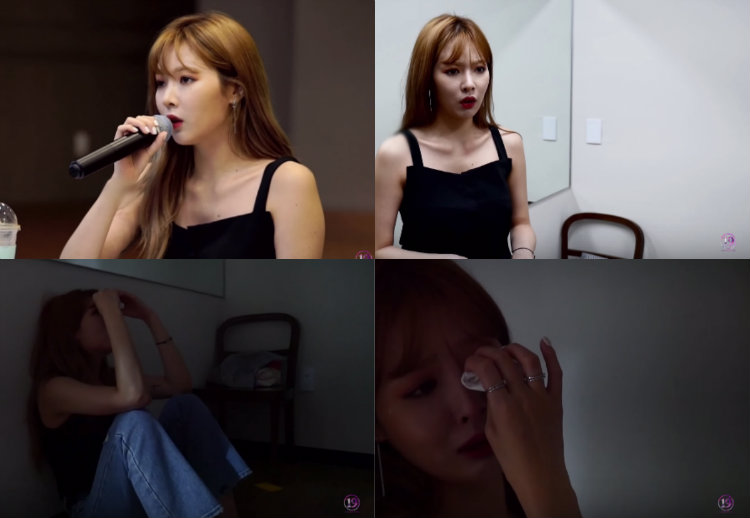 Watch: HyunA Reveals How She Really Feels About 4Minute’s Disbandment, Public’s Opinion, And Other Members

On the August 16 episode of MBC Every1’s “HyunA’s X19,” viewers get a glimpse of how the singer really feels about 4Minute’s disbandment.

The video takes us back to July 29, 2016 when HyunA had a press conference for her comeback. She is, of course, asked about 4Minute and its disbandment, and HyunA first says she is upset by the way people talk as if 4Minute didn’t exist. When asked what the members said after the disbandment was decided, HyunA is cautious, saying she can only speak for herself and no one else. She explains that the members who have all worked toward the same dream for seven years have decided to now head toward their individual dreams and support each other.

After the interview is over, HyunA looks visibly upset and drained. She explains to someone off camera that she hates the word “disbandment” and that it feels like that what people are really asking her behind all those polite questions is “are you relieved now that you are promoting solo instead of as a group?” HyunA exclaims, “Of course not! How can I do only what I want to do? It’s not something I can decide by myself and it upsets me that those types of things gets consumed so easily.”

HyunA is worried about the other members, who have not had the chance to talk about this situation and aren’t talking about it. She, however, is and HyunA is angry that it seems like she is talking about this for her album promotions – that she has become this type of person. There is nothing she can do about it, because it’s what this looks like to the public’s eye, and she hates herself for being that type of person.

HyunA eventually breaks down, crying the tears she’s been trying to hold in, and the lights are turned off. She exclaims as she dabs her tears, “I told you I didn’t want to do the interview.”

HyunA says she doesn’t really want to say anything, but she is, and she hates herself for it. While she doesn’t care what other people think, she worries that the other members will hate seeing her talk about the disbandment.

Five-member girl group 4Minute disbanded this past June, with Jihyun, Gayoon, Jiyoon, and Sohyun leaving Cube Entertainment and HyunA remaining with the agency.