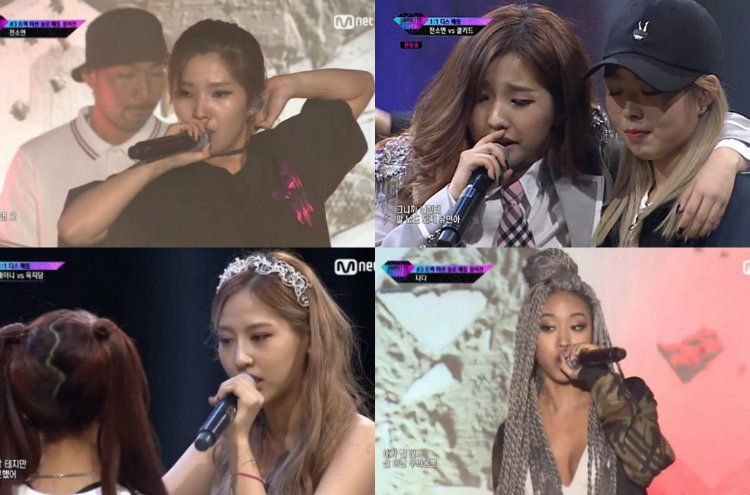 In the fourth episode of Mnet’s “Unpretty Rapstar 3” that aired on August 19, the 11 contestants competed in 1:1 diss battles to become the star of track number 3, produced by Kush.

Yuk Ji Dam went against Janey, Giant Pink against Nada, it was Grace versus Ash-B, Jeon Soyeon versus Coolkid, and Miryo versus Euna Kim versus Ha Joo Yeon. Watch the battles below and find out who won.

Yuk Ji Dam : Janey – Yuk Ji Dam wore a wedding dress for the diss battle, since Janey had jabbed that Yuk Ji Dam pays too much attention on her appearance rather than her rap.

Giant Pink : Nada – Many expected Giant Pink to win, but because of her mistake with her lyrics, Nada came out ahead.

Grace : Ash-B – Grace used the track that Ash-B was eliminated with for her diss strategy, but it wasn’t enough to shake up her opponent, and Ash-B won the battle in the end.

Jeon Soyeon : Coolkid – Jeon Soyeon wore her “Produce 101” outfit for the rap battle, but Coolkid made a mistake in the beginning with her lyrics and was unable to continue. Jeon Soyeon won in the end.

Among the six losing rappers, Coolkid, who couldn’t complete the battle, was ranked last. She was given the choice of selecting the person she would battle with to see who would be eliminated from the show, and she chose Euna Kim. Her choice was random, essentially selecting Euna Kim through the Korean version of “Eeny, meeny, miny, moe,” which frustrated the other rappers. Their rap battle will air next week.

The winners competed for the honor of rapping in track number 3, and Jeon Soyeon won with 251 votes from the audience. Kush, the producer, chose Nada, making Jeon Soyeon and Nada the star of track 3 – “I’m Scared.” Watch the performances from Nada and Jeon Soyeon that got them their wins.