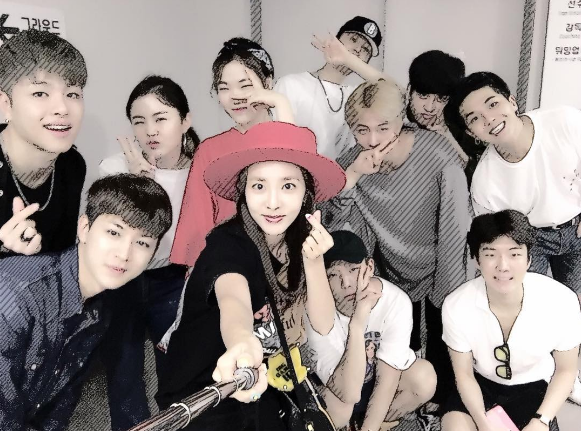 There were plenty of members of the YG family, as well as many more celebrities, in the crowd of VIPs celebrating BIGBANG’s tenth anniversary with the hit group at their recent concert!

On August 20, BIGBANG held their highly-anticipated “BIGBANG 0TO10” tenth anniversary concert at the Seoul World Cup Stadium, with thrilled fans filling up the 65,000 seat venue. It was a special night for everyone, with the guys performing many of their group, duo, and solo hits, and PSY also performing as a guest.

2NE1’s Sandara Park shared a group photo of some of the YG family backstage at the show, including members of iKON, WINNER, and Akdong Musician, and Lee Hi. She writes as the caption in English, “selfie with my lovely dongsaengs at Bigbang’s 0TO10 concert. One big happy family.”

She also shared a photo of herself looking out over the audience at the brightly lit stage during the show, and some footage of the concert with the caption, “Cool.”

BIGBANG’s sunbaes Jinusean were also at the show, and Sean uploaded plenty of videos and pictures to Instagram, including a shot of himself and Jinu with the caption, “BIGBANG dongsaengs, you’re cool! I’m proud of you.”

In addition, T-ara’s Hyomin was at the show, and posted a picture to her Instagram to share her excitement.

Singer and actress Eugene uploaded a video of the concert to her Instagram, showing the crowd listening to Taeyang perform “Eyes, Nose, Lips,” and adding the hashtag “favorite song.”

She also shared a video that shows herself and her husband, Ki Tae Young, as well as their daughter Rohee, enjoying the show! The family is currently starring together on the KBS reality show “The Return of Superman.”

Actor Lee Soo Hyuk also shared a photo of his ticket and wristband for the big night.

Congratulations again to BIGBANG on ten amazing years so far!