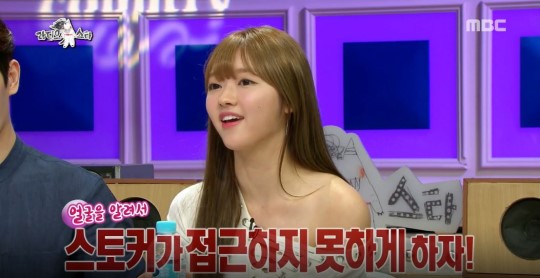 The reasons why people wish to be famous are sometimes not what you may expect.

During her appearance on the August 24 broadcast of MBC’s “Radio Star,” Oh My Girl’s YooA tells a chilling narrative of how she came to decide she wanted to debut.

When asked by MC Yoon Jong Shin, the idol starts off by explaining that she had problems with a large number of stalkers when she was younger. She says, “Someone would always follow me at least five times a week. It would be men I don’t know, anyone from those in their 20s to much older men.”

YooA continues on and explains that when she was in high school, there was even someone who tried to force her into his car. Another time, she reveals, “Someone walked beside me making lewd remarks constantly.”

The idol concludes with how she wanted to appear in the public’s eye and debut, so that “people couldn’t approach me in that manner anymore.”

Hopefully she no longer has issues with any stalkers!

Oh My Girl
YooA
Radio Star
How does this article make you feel?