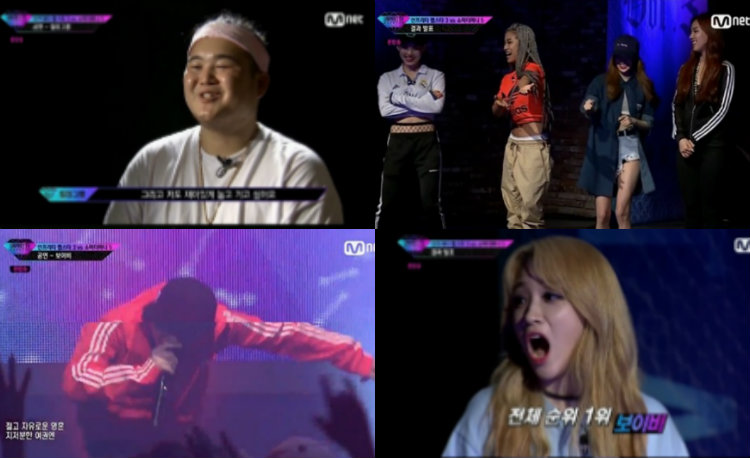 Continuing from last week, Coolkid battled Yuna Kim in order to stay on the show, but lost against her although both made mistakes.

The remaining 10 contestants competed to be featured in track number four, produced by San E. First they would compete with “Show Me the Money” contestants and then the top ranking rappers would compete for San E’s track.

The “Unpretty Rapstar” contestants felt more pressure than usual with the audience showing more excitement for the male rappers of “Show Me the Money,” and the rappers themselves showing a lot of confidence that they will definitely win against the female rappers after watching their rehearsal.

Watch the battles below:

The audience voted for the best rappers and first place was Boi B with 219 points. Giant Pink placed second, and Miryo was third. Killagram was forth, Jeon Soyeon was fifth, tying with Nada. Woo Tae Woon was seventh, Yuk Ji Dam was eighth. The top female rappers who placed tenth or above got to compete for San E’s track in solo battles. Grace, who ranked 19th and was the lowest female rapper, chose Janey for a “death battle” not be eliminated from the show.

Watch the solo battles below:

Nada
Unpretty Rapstar 3
San E
Show Me the Money
How does this article make you feel?