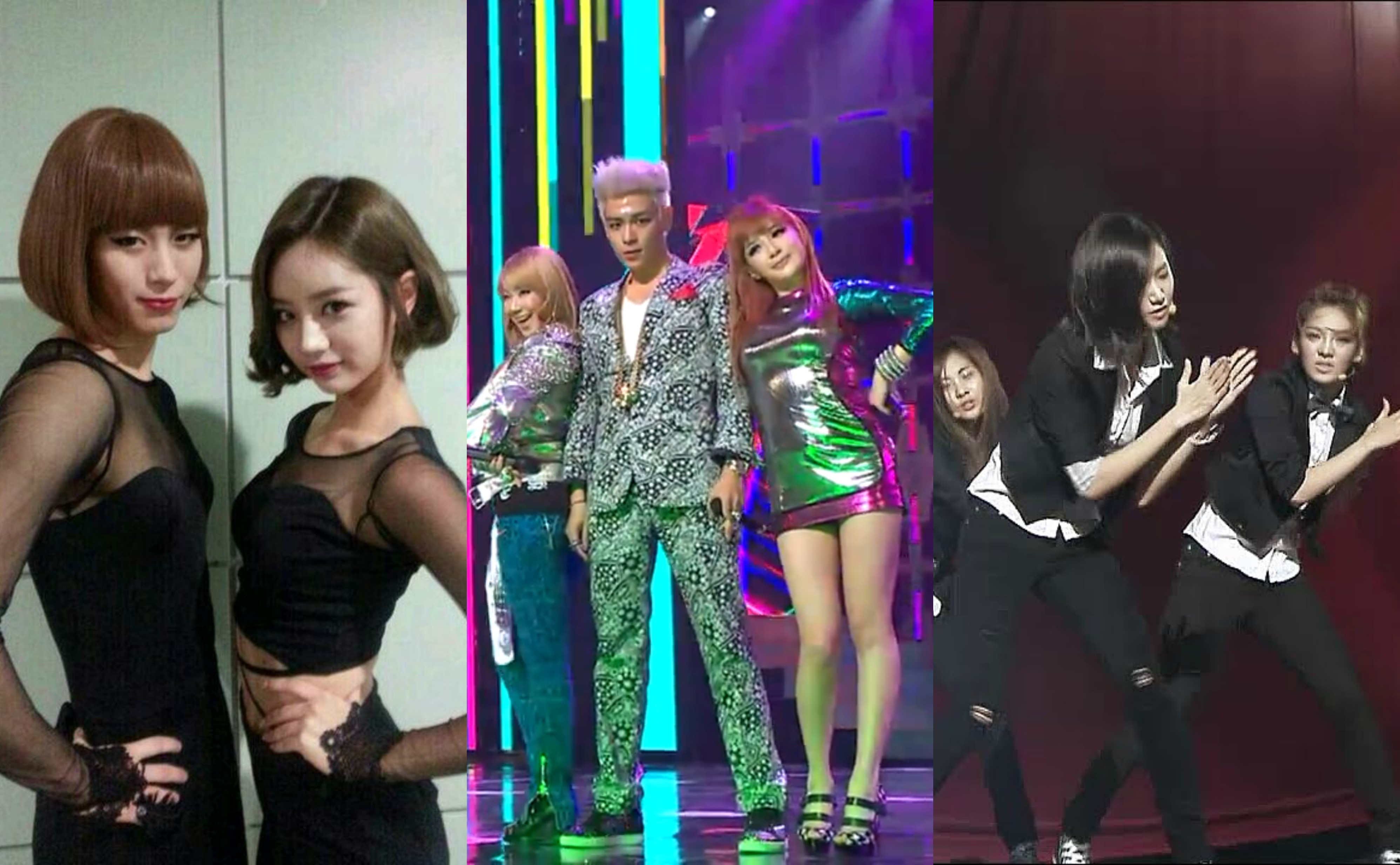 Special stages are fun ways to see groups outside of their normal image, and it can lead to some of our favorite performances. In no particular order, here are a collection of some of the extremely entertaining times K-Pop groups switched things up and performed another group’s song.

Nothing’s better than two legendary K-pop groups switching their hit songs and then performing it all together. Wonder Girls and BIGBANG make us super nostalgic with their fun performance below.

This special collaboration between Girl’s Day and VIXX definitely makes you wish the two groups were an actual co-ed group. If you’ve ever wondered what Troublemaker’s “Now” would be like with four couples instead of one, here’s the chance to see it play out onstage.

Okay, who else wishes this was an official track? SPICA seamlessly combines hits from two female soloists and ten girl groups, including Girls’ Generation, TWICE, and Red Velvet, into one super addictive medley.

We can’t get enough of boy group members covering “Something” by Girl’s Day, especially when they wear the girl group’s iconic slit dresses and feather rings. TVXQ’s Changmin, Super Junior’s Kyuhyun, SHINee’s Minho, and EXO’s Suho take to the stage as the “Kyu Line” to cover the girl group hit during the 2014 SMTOWN tour below.

Of course, we can’t talk “Something” covers without mentioning Boys Day. NU’EST’s Ren, BTOB’s Minhyuk, VIXX’s Hongbin, and A-JAX’s Seungjin give us yet another legendary performance of the hit in their special stage below.

SEVENTEEN: “Because of You (After School)”

Even before their official debut, SEVENTEEN sung their way into our hearts with their vocal unit’s cover of After School’s “Because of You.” The group put their own spin on the classic, and their harmonies will give you chills.

Tons of boy groups have covered Super Junior’s “Sorry Sorry” over the years. But we can’t deny how awesome it is to finally see a girl group perform the classic, especially when they’re Super Junior’s sister group. Girls’ Generation gives us a great (albeit short) performance of their labelmate’s hit below.

Remember when it was completely normal to see SHINee, Super Junior, 2PM, and 2AM members on stage together performing a Girls’ Generation song? Even AOMG founder and former 2PM leader Jay Park takes part in this stage. 2009 was definitely a simpler time.

Mark this under performances we didn’t know we needed but are so glad exists. INFINITE’s Sungyeol and Sungjong unite for a Troublemaker cover that explodes with fan service, giving us a no-holds-barred cover that definitely rivals the original duo.

As if having killer vocals wasn’t enough, MAMAMOO shocks us yet again with their incredible ability to create and perform medleys. Their girl group medley includes songs from Apink, Girls’ Generation, and GFRIEND: just to name a few.

Okay, so PSY is technically a solo artist and not a group, but how can you not love how well Teen Top and Girl’s Day perform “Gentleman” in this Music Bank stage? Even Jung Jinwoon and Park Se Young, who were MCs at the time, join in on the fun.

You can never go wrong when two chart-topping girl groups perform each other’s songs. TWICE and GFRIEND may differ in number of members, but that doesn’t mean they can’t give an equally powerful stage. Watch both of their seamless switch-ups below.

This Shinhwa classic may not be a genre BTS usually gravitates toward, but we can’t deny how amazing the group sounds singing it. It definitely makes you wish BTS tried the 90s sound out more often, even if just for one song.

BTOB has tons of fun in their performance of MAMAMOO’s hit from earlier in the year “You’re The Best.” It’s hard to imagine a group of seven men singing a song meant just for four women, but we’re definitely glad to hear it from BTOB.

The late 2000s were home to some very… interesting collaborations, to say the least. No matter how old this one is, 2PM and 2AM’s hilarious parody of Brown Eyed Girls’ mega hit “Abracadabra” will always leave us in stitches.

YG Family have given us countless amazing song swaps over the years, from BIGBANG’s parody of 2NE1’s “I Love You” to impressive group collaborations like this and even joint 2NE1 and Lee Hi performances. But 2NE1’s performance of BIGBANG’s “Last Farewell” will always have a special place in your heart.

If you’re lucky enough to attend a concert, you’re in for a once-in-a-lifetime experience of songs you’d never see the group perform on music shows. This fancam of GOT7 performing “Miniskirt” by AOA is definite proof of that.

Special stages are automatic guarantees of great performances and present idols with the chance to completely switch things up. In this one, SISTAR swaps songs with Secret while f(x) trades with 4minute.

If we didn’t know this was originally a Super Junior song, we’d definitely think was an official BESTie track and not a cover. It’s that good. Check their performance out below.

Jokwon and GOT7’s BamBam might as well announce themselves as the newest members of miss A. This performance of “Hush” is captivating, and we’ll definitely be anticipating an official encore soon.

Although Soyou and Junggigo are more of a collaboration than an actual duo, this acapella Topp Dogg cover is too amazing to skip over. Check out their unconventional cover of the chart-topping hit below.

WINNER gives 2NE1’s “Missing You” a sophisticated twist in their cover of the song below, and it’ll always be a go-to tune to soothe your soul.

You can try, but you’ll never look half as great as VIXX does in miniskirts and leopard print. Even though Leo is absent, the men still give us a stunning, high-energy performance of the Wonder Girls classic. Check it out below.

Girl group covers of boy group songs aren’t a usual thing, but After School has never been the type of group to stick to the norm. They wow us time and time again with their comebacks, and their cover of 2PM’s “Again & Again” is no exception.

BEAST excels with their cover of the song as well. Check their version out below.

With their instruments close by, DAY6 perform a stripped down, more laid-back version of labelmate GOT7’s “Confession Song.” Their cover is both smooth and relaxing, and it makes you wish the two groups would perform an official version of the track.

Okay, so the Pussycat Dolls aren’t a K-pop group. We know. But how could we not include this totally unexpected joint stage with FTISLAND and f(x)? These are two groups we definitely wouldn’t expect a collaboration from, and yet somehow it still works perfectly.

EXID definitely feels like the cool group of seniors offering the freshman Cosmic Girls group to their lunch table here, and we couldn’t love their collaboration more. Not only do Cosmic Girls give an exceptional performance of “Up & Down,” but they also join EXID for a dance break during “Hot Pink.”

What’s your favorite group switch performance? Let us know in the comments below!

brookenicole writes from YG’s basement until her (indefinitely) postponed debut. You can find her on Twitter here.