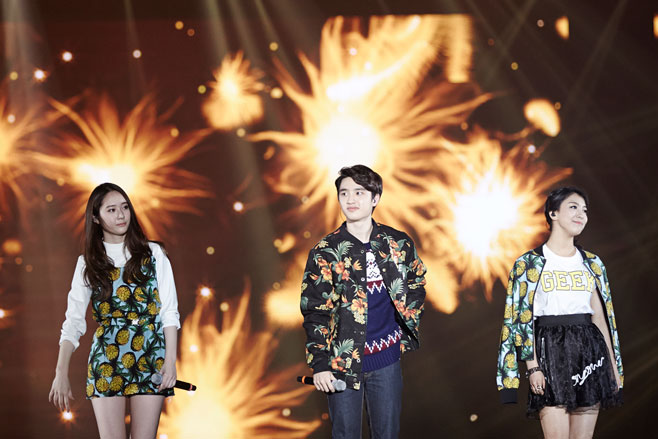 Just when you thought there was nothing better than your favorite group releasing new music, they link up with members of another group and release an amazing collab track. In no particular order, here are 15 stunning collaborations you absolutely need on your playlist.

Years before her official debut, BLACKPINK’s Jennie lent her voice to a number of YG artists’ tracks. Much like her contribution on G-Dragon’s “Black,” Jennie makes this Lee Hi collaboration an easy essential.

Wonder Girls’ Sunmi turns heads when she releases solo title tracks like “Full Moon” and “24 Hours,” but you definitely can’t let her duet with GOT7’s Jackson slip under your radar. It’s slow, lush, and rhythmic – a perfect fit for both stargazing and late-night car rides.

If there were ever two groups that needed to collaborate more often, f(x) and SHINee would be those groups. “Lollipop” is their first official track together, and it definitely makes you wish they’d collaborate more.

Apink and B.A.P are two groups you’d never imagine together, but their joint track “Mini” still works. Aside from making you immediately want to buy everything they’re selling, the tune is a cute and catchy essential on all your favorite playlists.

Can we all agree that STATION is the best concept to come out of SM Entertainment this year? EXO’s Chen and rapper Heize give us yet another hit in their collaboration STATION track “Lil’ Something,” produced by Vibe’s Jae Hyun Ryu.

IU – “Everybody Has Secrets (feat. Gain)”

IU joins Brown Eyed Girls’ Gain for a jazzy duet in “Everybody Has Secrets.” The tune is a great B-side track to IU’s “Modern Times” album, which includes another fantastic duet with SHINee’s Jonghyun.

Yet another example of why we need cross-company group collaborations. MONSTA X couples with MAMAMOO’s Wheein for a laidback track unlike their usual hard-hitting hip hop.

Continuing on with that same mellow feel, f(x) rejoins the list for their collaboration with EXO’s D.O on “Goodbye Summer.” Thanks to Amber’s lyricism, there’s even an English version, featuring Eric Nam.

Although the official version features Dok2, you can’t help but love HyunA’s version with Zico for her live stages. The two rappers exude the same strong, daring confidence we know from their solo projects, and their song will leave you feeling just as bold.

With the amount of classics G-Dragon, T.O.P, and Park Bom have under their belts, YG Entertainment might as well go ahead and make them an official subunit. This soulful tune from BIGBANG’s early days still deserves your attention eight years after its release.

VIXX switches things up for their track “You’re Mine” with Minah of Girl’s Day. This easygoing track pairs Minah with the VIXX members, setting the perfect ambience for a carefree evening.

More than just a beautiful song, “So Far Away” is a transformative collaboration between BTS’s Suga and indie artist Suran that explores the uphill battle of having and achieving your dreams.

T-ara and Supernova collaborate effortlessly in their 2011 joint track “TTL (Time To Love).” The groups work together so seamlessly, it’s almost like they’re one coed group.

SHINee’s Jonghyun’s duet with Younha will definitely be your anthem for the fall. Calm and captivating, this track is the perfect addition to any and all of your lazy autumn days.

YG artists are no strangers to collaborating with their labelmates. This Lee Hi and Mino track is the perfect example of their artistry. Lee Hi’s voice alone is enough to make for an enticing song, but Mino brings it to a whole other level with his skillful rap.

What are your favorite K-pop collabs? Let us know in the comments below!