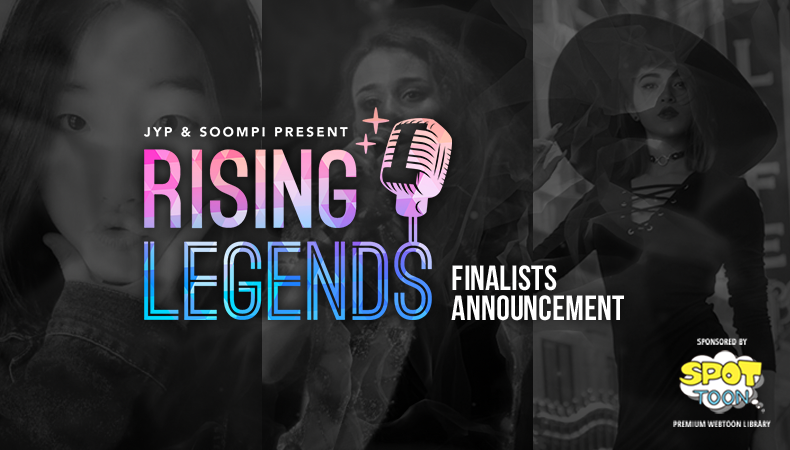 You Voted, You Decided: These Are Your New “Rising Legends”

After three rounds and nearly a million audience votes, we have the finalists of the first ever JYP Entertainment x Soompi Rising Legends event, sponsored by Spottoon, a premium webtoon library!

Competition has been fierce from the beginning, but this round was especially intense with fans voting nearly non-stop. We also brought in our panel of experts to weigh in on this round, including: Buzzfeed’s Elaina Wahl, Fuse’s Jeff Benjamin, Hello Asia! and The AU Review’s Johnny Au, Billboard contributor Tamar Herman, and our very own founder Susan Kang.

With TWICE, GOT7, and DAY6 cheering on the participants, it has been a tough journey from 5,000 entries to the last 30, but we are pleased to announce our three finalists who will receive a one-on-one audition with the JYP talent team and the ultimate title of “Soompi Rising Legend.” A big thank you goes out to everyone who participated in this year’s event and supported our talented performers!

Without further ado, the finalists of the first annual “Rising Legends” –

Fuse’s Jeff Benjamin on alexchristine: “Wow, I didn’t expect any contestants to record in the middle of a rainstorm! But this was a really cool performance to watch and technically, you did an awesome job. This was a smart song choice, and I felt like you did a great job interpreting it by bringing the personality a song like this needs.”

Soompi founder Susan Kang: “You’re such a natural performer — there’s an underlying grace and fluidity to your moves but you hit hard when you need to. All 3 of your videos were strong, but this was my favorite one to watch. Great job!”

Jeff Benjamin of FUSE on iyeon7: “Sonically, I feel like this one of the most natural performances, you sounded so comfortable rapping and singing on this, and it was very believable. I think the video component hurt you a little as it sometimes got out of sync which became distracting. It would have been cool to see you show some more personality and energy for the visual part.”

Soompi’s founder Susan Kang: “You stood out to me ever since the first round — the speed and precision of your delivery (and in Korean!) is so impressive, and you have a natural charisma that shines. Aside from the audio syncing issues with the video, it was great.”

Jeff Benjamin of FUSE on skyswirl: “Something about this performance really spoke to me and moved me. I felt like I got a good sense about your personality from this performance and you truly made it your own. I definitely think there’s something special about you!”

Congratulations to all of the finalists and to everyone who participated in the first global online audition of its kind. We have so many amazingly talented fans around the world and we look forward to helping even more fans pursue their dreams to become idols themselves next year! To relive the competition and your favorite entries, check out soompi.com/legends!

Remember, JYP is still holding offline auditions throughout North America so if you were unable to get a video ready in time for Rising Legends, you still have a shot at stardom! Be sure to check out soompi.com/jyp for all of the audition details.

Update: Be sure to check out the final rankings of each category, along with judges’ comments, here!

Soompi Spotlight
Soompi Exclusive
Rising Legends
How does this article make you feel?