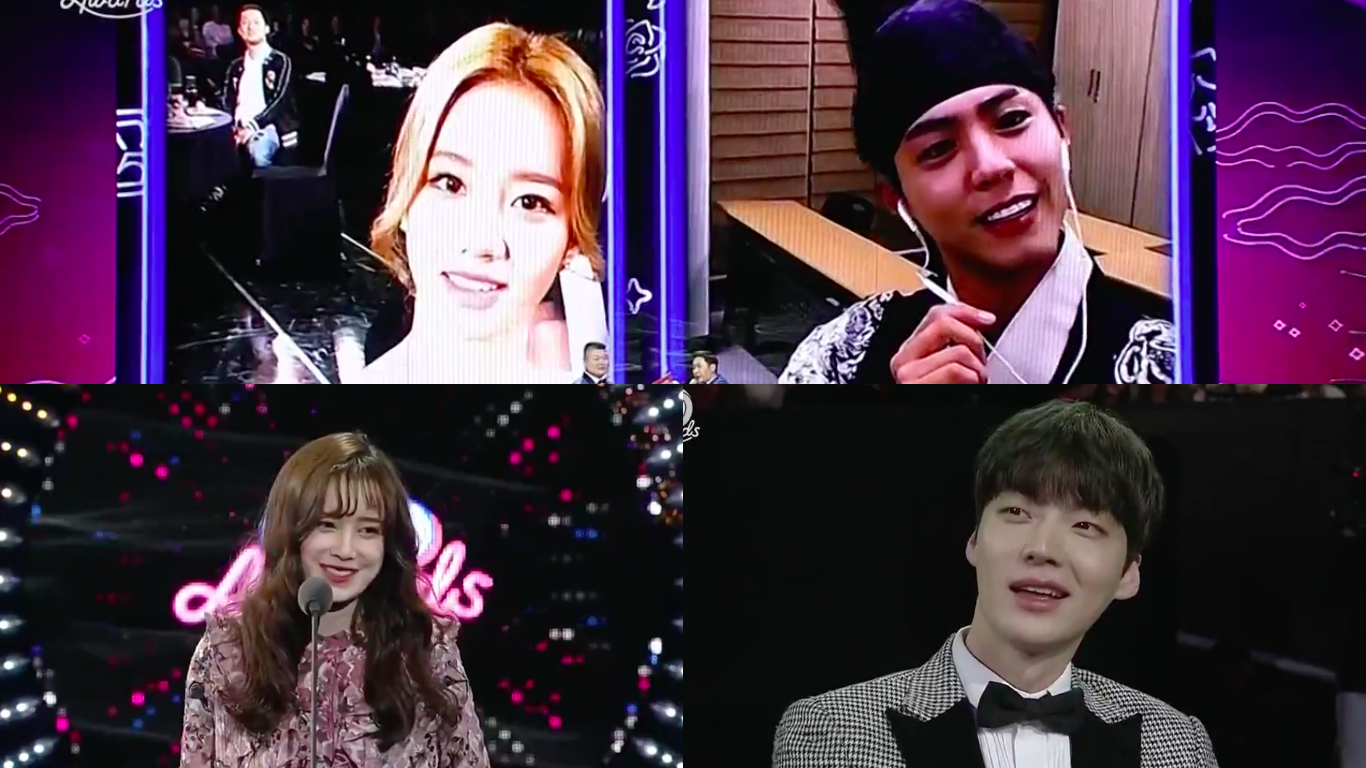 tvN definitely knows how to have a great time at an award show!

On October 9, tvN celebrated the past ten years of the network’s hit shows and talent at the tvN10 Awards. The evening’s biggest awards went to stars such as Jo Jin Woong, Kim Hye Soo, Lee Sung Min, and more, with dramas including “Reply 1988,” “Signal,” and “Another Oh Hae Young” grabbing top prizes. Check out the full list of winners here!

The show feels more like a party than an awards show from the start, and even includes performances by PSY that bring the house down. The atmosphere in the venue leads to plenty of fun moments featuring some fan-favorite drama and variety stars.

For example, Ku Hye Sun surprises her husband Ahn Jae Hyun when she appears on stage to present an award. “I came here without my husband knowing,” she says with a laugh as he looks shocked and smiles. “I was hiding.” 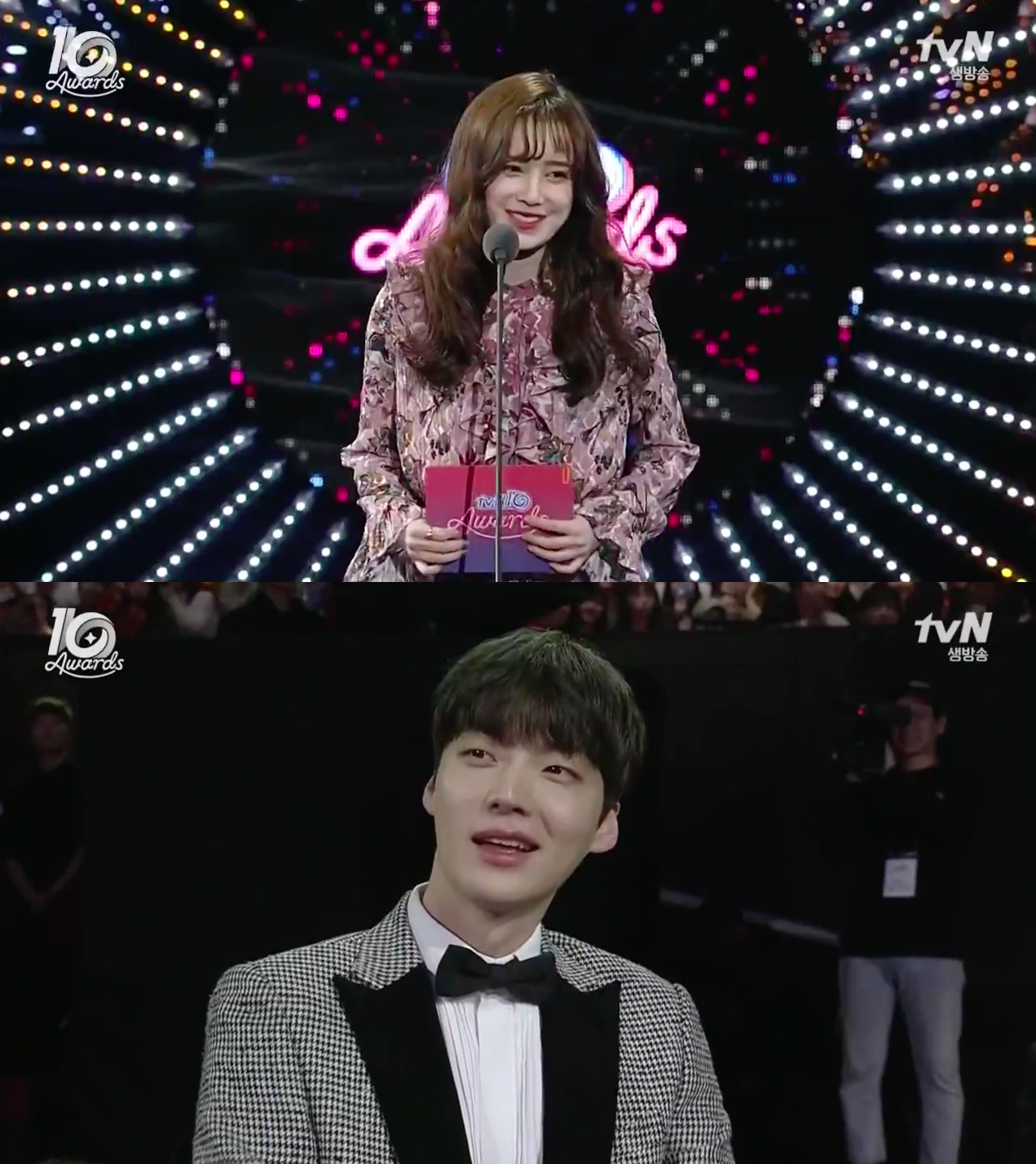 When asked about his wife’s sudden appearance, Ahn Jae Hyun admits, “I really didn’t know she was coming.” He looks up to find her but can’t see her on stage and says, “She’s already left!” He then calls out, “I love you so much, honey!” to the cheers of the crowd. 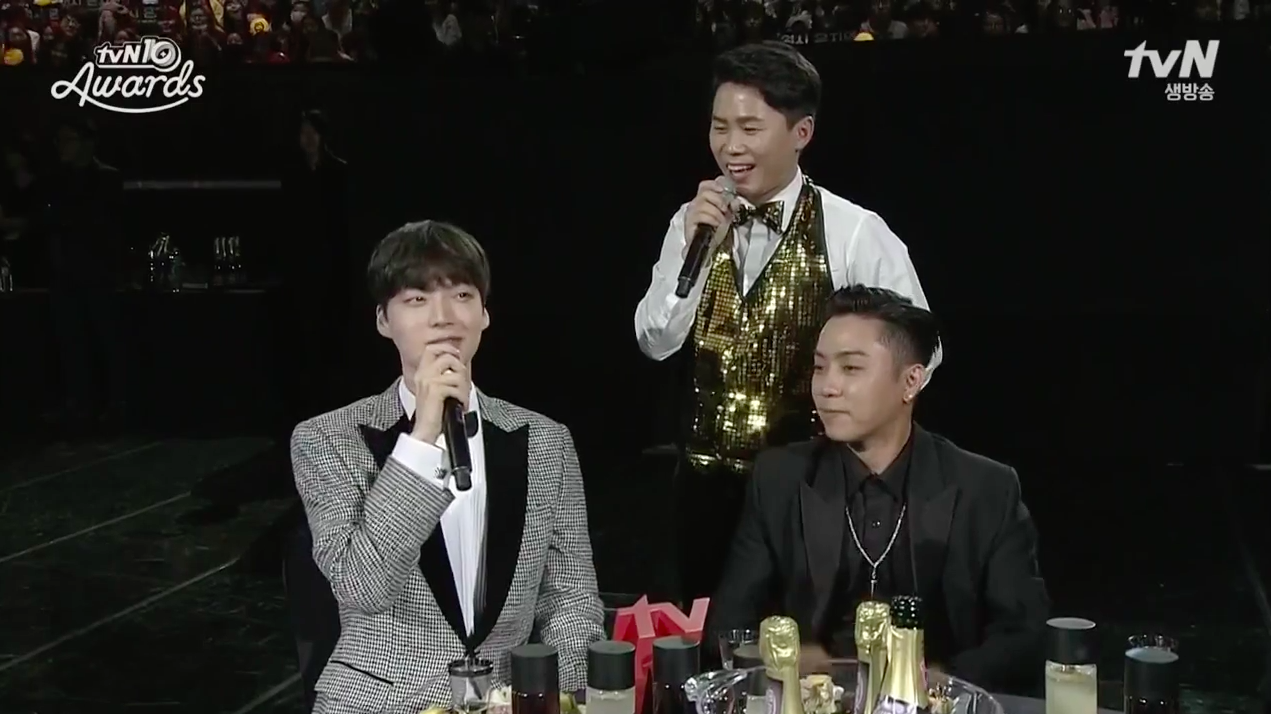 Fans of “Reply 1988” also have lots to celebrate, including the precious moment when Ryu Jun Yeol and Hyeri take the stage together to accept their Trending Actors awards. 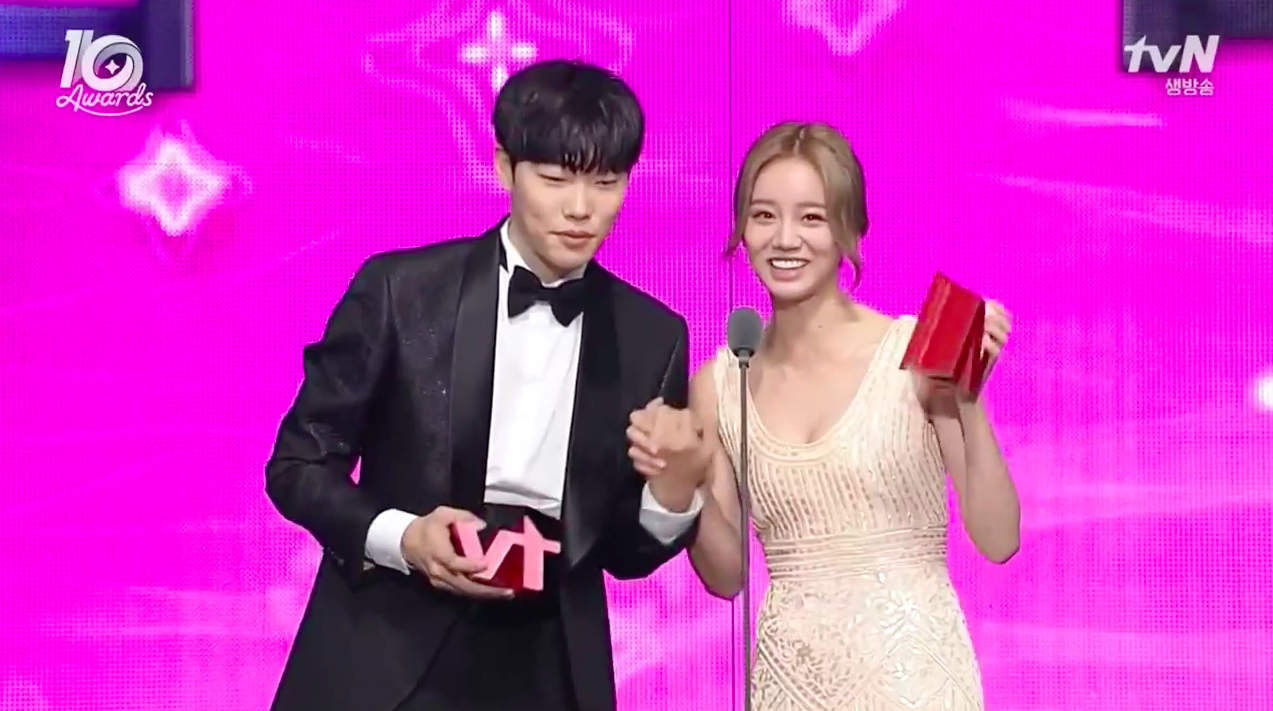 Their co-star Park Bo Gum wins the tvN Asia Award, but as he was unable to be there at the show because he was filming, he gives his thank you speech via a video call from the set of “Moonlight Drawn by Clouds.” He greets fans in full costume, and thanks the creators of “Reply 1988.” 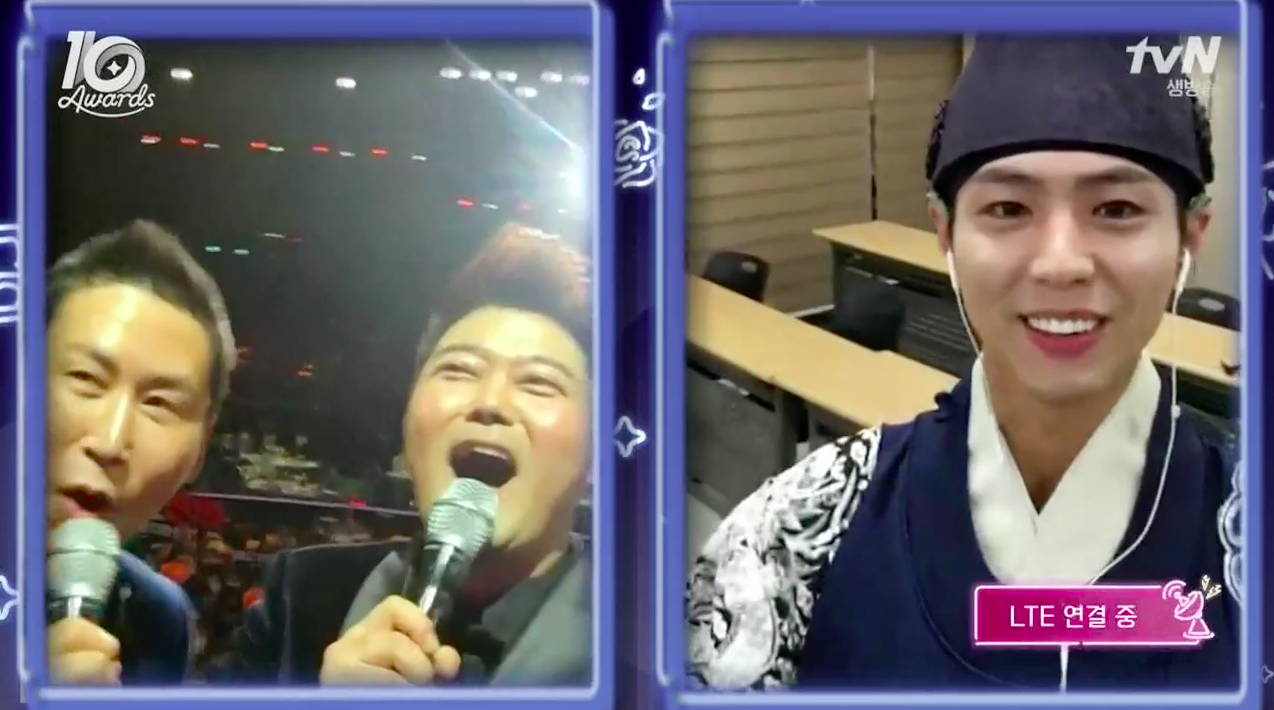 He then says, “Duk Sun, where are you?” Hyeri waves at him, before he calls out to his other “Reply 1988” co-stars and Ryu Jun Yeol responds by holding up Park Bo Gum’s table place card. 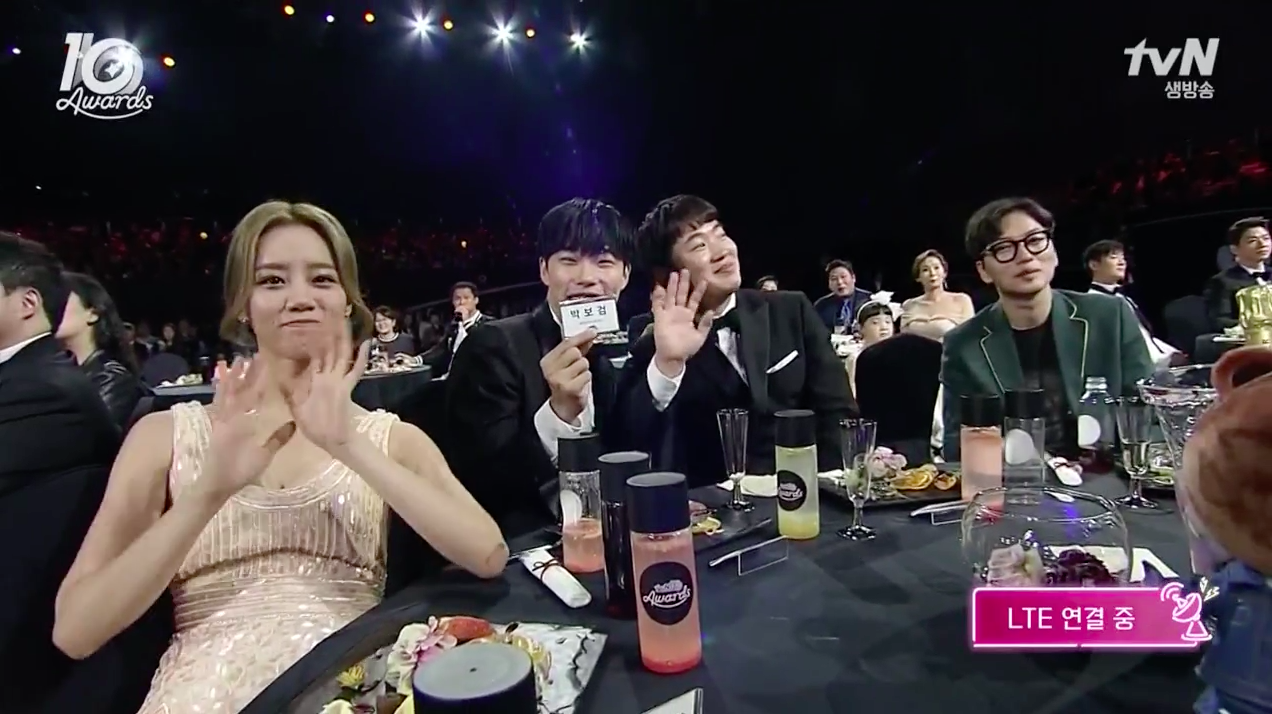 After Park Bo Gum wraps up his thank yous, the hosts send the award presenter Jun Hyun Moo to run down to Hyeri with the phone so that she can say hello to Park Bo Gum. When Park Bo Gum sees Hyeri, he says, “Duk Sun! She’s beautiful today too.”

Hyeri says to him, “Congrats, Taek!” Park Bo Gum thanks her, which makes Hyeri giggle, and the hosts joke that they seem a bit awkward. “She’s my wife,” says Park Bo Gum to the delight of the crowd, and Hyeri replies, “He’s my husband!”

Park Bo Gum then congratulates Ryu Jun Yeol and Hyeri on winning their awards, before Hyeri says to Park Bo Gum, “Husband, I hope you become not only Asia’s star, but also a world star.” 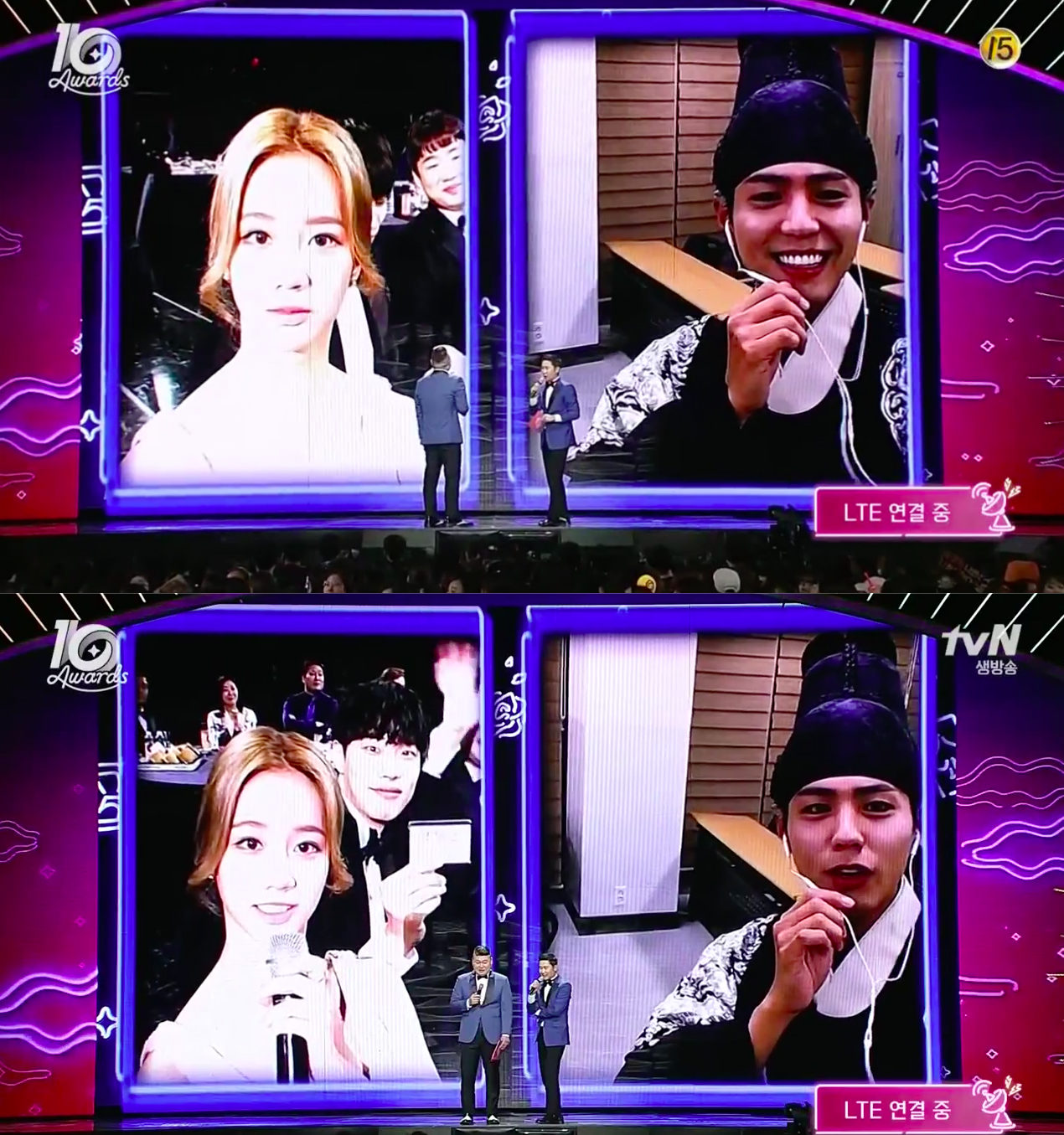 When Jung Eun Ji and Seo In Guk win the award for Best Kiss for their kiss scene in “Reply 1997,” Seo In Guk shares with a laugh that he kissed Jung Eun Ji at that angle because the director wanted to try to hide how his upper lip sticks out because of his short philtrum.

Jung Eun Ji adds, “I think we shot ten takes. I’m not sure how many hours it took, but I remember us being really cold, especially as Seo In Guk was shirtless.” 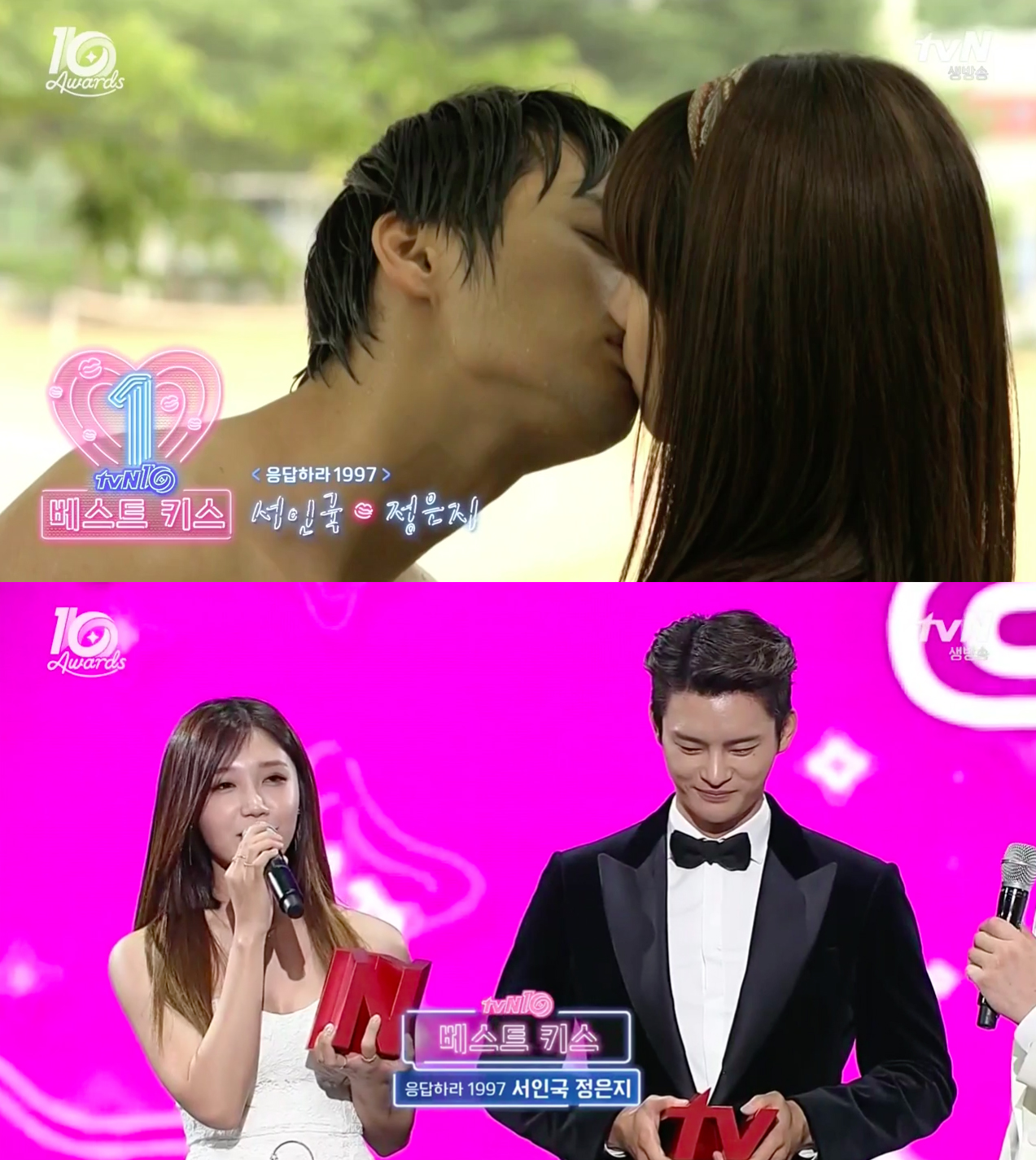 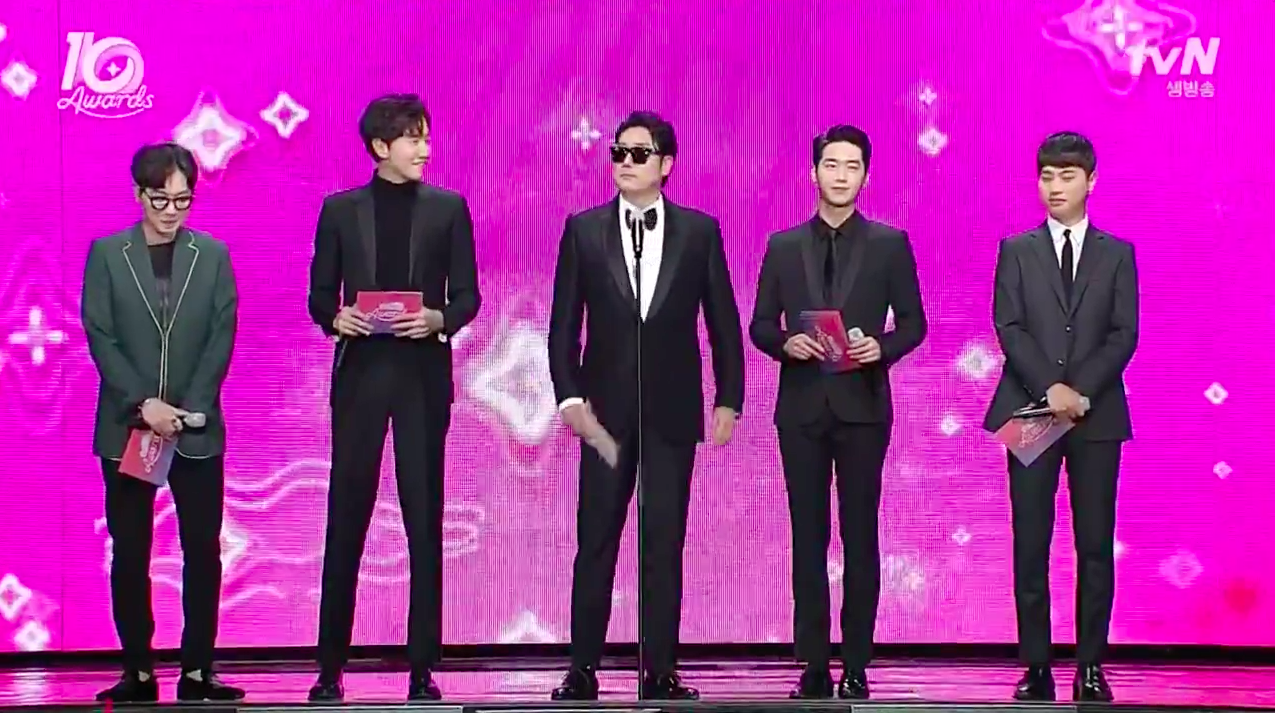 The show also includes plenty of funny touches including a mic that slowly descends to try to get the stars to keep their thank you speeches short. “SNL Korea”‘s Kwon Hyuk Soo and Lee Se Young are as hilarious as ever as they do their best to get all their thank yous in, despite the mic slowly dropping below the stage. 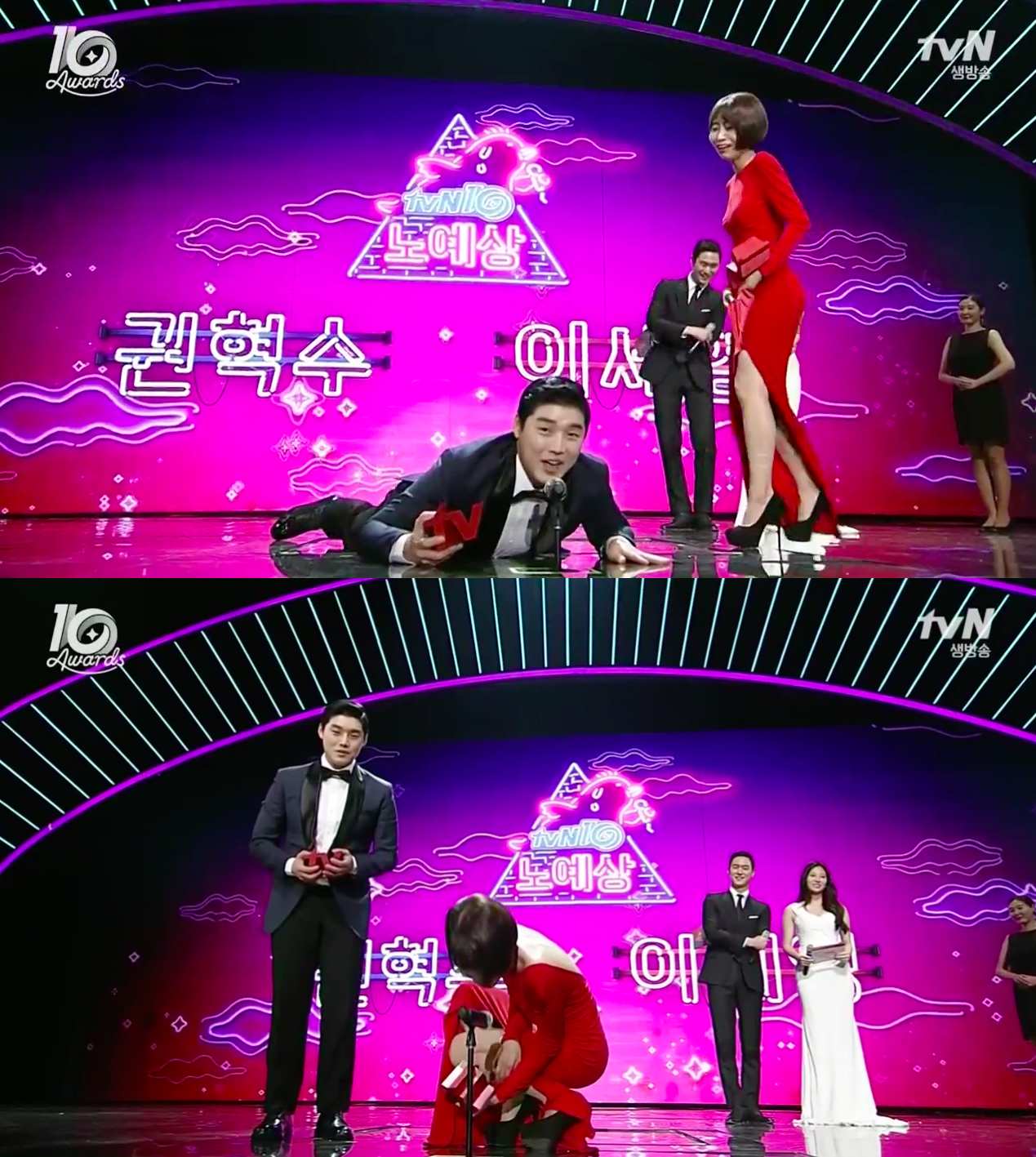 All in all, the show was a great celebration of the network’s past ten years!

What was your favorite moment from the tvN10 Awards?

Watch the night’s award-winning dramas like “Reply 1988,” “Signal,” and “Another Oh Hae Young” at Viki!