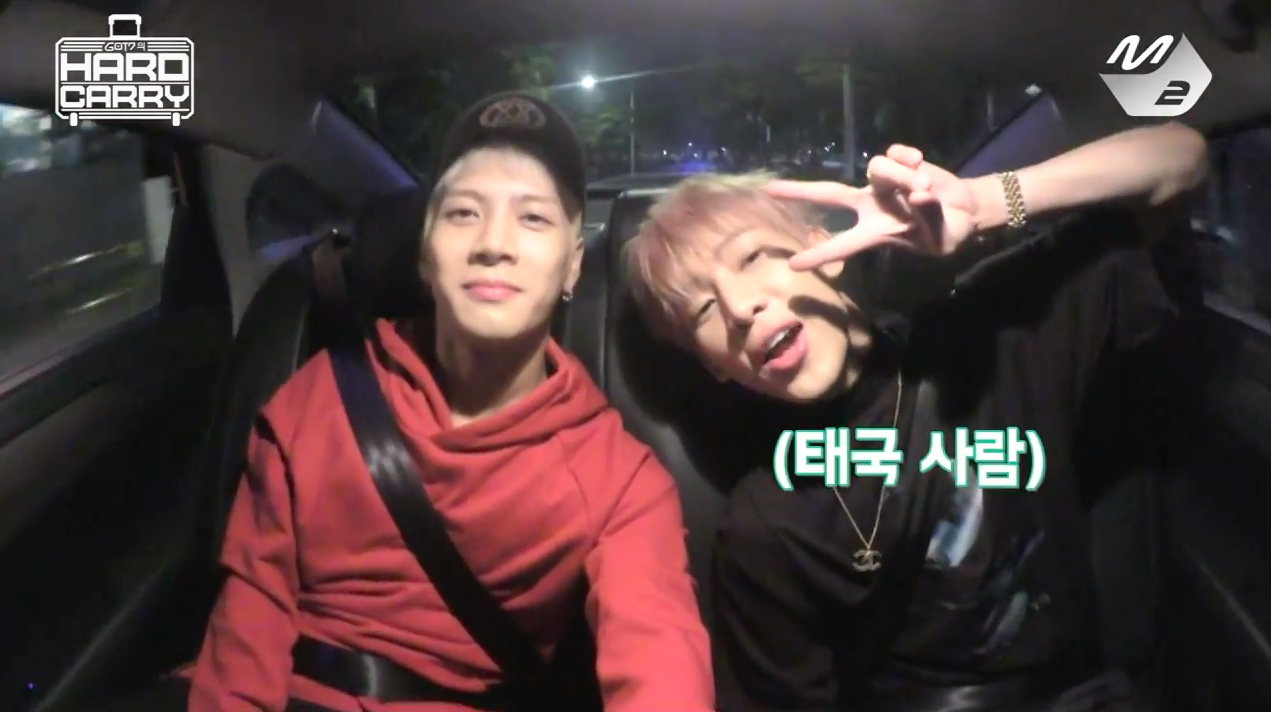 Watch: GOT7 Shares Self-Directed MV For “Skyway,” Goes On Adventures Without Managers In New Reality Show

On October 17, GOT7 shared the first episode of their new reality show entitled “Hard Carry”!

The guys of GOT7 got to choose their own missions for their reality show, and one of their goals was to travel to the airport without their managers. They split up into small groups, and Jackson and BamBam are the first ones we see taking on the challenge, as they whine a bit about having to get up in the early hours of the morning to head to the airport.

They grab a cab and play games where they take turns boasting about their accomplishments, and then “dissing” each other. BamBam then tells Jackson that part of his plan for their trip is for them to take the subway, but it’s BamBam’s first time! “I really have no idea how to do this,” he admits when they get to the station. With Jackson taking the lead, the sleepy pair successfully manages to take the subway to the airport, where they drowsily celebrate their success.

Next up we see JB, Youngjae, and Yugyeom attempt to make their own way to the airport, and JB tells the others that he’s invited “a really amazing guy” to help them out. It turns out to be 2AM’s Jeong Jinwoon!

The show was filmed on the day after news broke that Jeong Jinwoon and Wonder Girls member Yeeun are dating, so they naturally tease him a bit about it, and then head off together. They listen to “Hard Carry” in the car, and Jeong Jinwoon keeps saying he wishes he wasn’t driving so that he could dance.

Yugyeom then turns on Yeeun’s track “Ain’t Nobody” and they all laugh at first but then totally get into the song.

Mark and Jinyoung are the last pair to try to get to the airport on their own, and they decide to stop at a cafe before they take the bus there. Mark admits that the last time he took the bus was when he was a trainee, and he still remembers the bus number he had to take to go to martial arts lessons. Jinyoung replies, “I took the subway two days ago to go to school.”

“Who do you think is having the hardest time today?” asks a crew member. “BamBam and Jackson,” replies Mark without any hesitation. “I think those two are going to miss the plane,” jokes Jinyoung.

In the next clip, the guys excitedly get in a long line at Shake Shack, but are embarrassed by how they’re all dressed up in fancy suits. “It’s not possible to be more embarrassed than this!” says BamBam. Youngjae whines that he wants to just go inside, as Jackson yells, “I just want to get out of this situation!”

BamBam decides that they need to make things even worse by playing rock, paper, scissors and having the loser do a penalty. When Jackson loses, he has to go into the restaurant and make an announcement to introduce GOT7 to everyone inside!

The show also shared GOT7’s self-directed and filmed music video for “Skyway” off their latest album “Flight Log: Turbulence.” Check it out below!

What did you think of the premiere episode of GOT7’s “Hard Carry”?

Support the artist by buying GOT7 - Flight Log: Turbulence from YesAsia
GOT7
Jackson
Yugyeom
BamBam
HA:TFELT (Yeeun)
Jeong Jinwoon
2AM
JAY B
Youngjae
Jinyoung (GOT7)
Mark (GOT7)
How does this article make you feel?