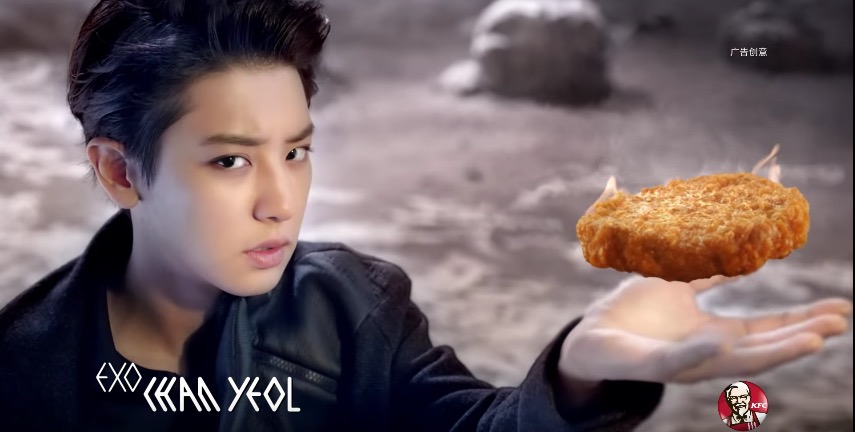 It’s hard to skip commercials when they include some of our favorite K-pop idols. In no particular order, here are a few of the times K-pop idols turned ordinary commercials into memorable mini-dramas, catchy anthems, and cute collaborations.

It’s been a while since we’ve seen EXO use their super powers for their comebacks, but it was a huge part of the group’s concept when they first debuted. So much so that they even used it to assemble fast food meals in a super intense (and hilarious) commercial for KFC China. Will they ever live this one down? Probably not, but that’s why we love it.

What is it about chicken commercials that make boy groups get so overly dramatic? BTS turns eating barbecue chicken into an incredibly enjoyable Oscar-worthy event, and it’ll have you running to the store to pick up some Mala Hot Chicken in seconds.

EXO steps into all of our daydreams when they sneak peek what they’d be like as your boyfriend in this fresh Nature Republic commercial, which takes a hilarious plot twist right at the end.

Okay, are we the only ones wishing this LG commercial was actually a real drama? BLACKPINK’s Jisoo finds herself in the middle of a love triangle (square?) when a few iKON members showcase their feelings for her at her birthday party.

Much like end-of-the-year specials, commercials have a way of bringing unlikely collaborations between different K-pop groups. This is especially true for B1A4, GOT7, and CLC, who unite for a super catchy, super cute song about family for Smart School Uniform.

Just recently, BTS and GFRIEND put their spin on the “Family” song, too.

What if you could make an idol kiss you just by writing their name in a notebook? That’s exactly what happens to 2NE1’s Dara in this commercial for Etude Kiss Note. It’s a quirky twist on the popular Japanese manga “Death Note” — where instead of a person dying when their name is written in the notebook, they kiss you.

Oh, and did we mention that the members of SHINee are the direct focus for Dara’s newfound power? Check out the first installment with Dara and Jonghyun below.

2PM & miss A for Crossfire

Even with all the different concepts popping up in K-pop videos daily, we rarely get to see groups tackle intense, action movie concepts like 2PM and miss A do for this Crossfire commercial. This one plays like the prologue of a highly thrilling action film, and it makes you wish it was longer than just a few minutes.

SM Entertainment labelmates TVXQ and Girls’ Generation collaborate in this hilarious commercial for Anycall Haptic. The two groups locked in the elevator is enough to make it memorable, but the three other segments to the ad make it both an entertaining story and an iconic group interaction.

This ad is less than two minutes long, and we already want to cast AOA’s Seolhyun in every upcoming action film available. If you’ve ever wondered what Seolhyun would be like as a bold, take-no-prisoners action star, this Sudden Attack commercial is a must-watch.

SISTAR for Hero for Kakao

Can fantasy be SISTAR’s next comeback concept? This commercial looks like the trailer for a box office blockbuster, and if it wasn’t advertising a Kakao game instead, we’d definitely be running to the movies to watch it. Soyou may be absent here, but hopefully she can make an appearance when the group (hopefully) tackles the concept for a comeback.

Nothing will ever be quite as iconic as K-pop group interactions in the late 2000s. Seriously, when will we ever see two groups from two different major labels film another commercial like this? Especially with so much skinship! This Girls’ Generation and 2PM collaboration is not only a mini-drama within an ad, but it’s also a catchy song that can definitely double as a ringtone.

Have you ever dreamed about seeing a huge, glowing version of Dara’s head rise up in the sky like your own personal sunset? No? Well, maybe you’ll want to after you see all four 2NE1 members in this hilarious commercial for 11st.

BIGBANG’s T.O.P turns into the manly, protective boyfriend of our dreams in this commercial for Reebok Classic with former Wonder Girls member Sohee. Not only do the two make an amazing couple, they turn dodging the paparazzi into a fierce catwalk.

Apink and B.A.P make an unlikely yet perfect collaboration for their Skoolooks commercial. The CF is complete with a captivating hook you’ll be singing along to for weeks, and it’ll have you hunting for their cute school uniforms in no time.

Even though the 4Minute members have gone their separate ways, this intense commercial definitely makes us wish they’d reunite for an action concept. It would be the perfect addition to the group’s already confident and tough image.