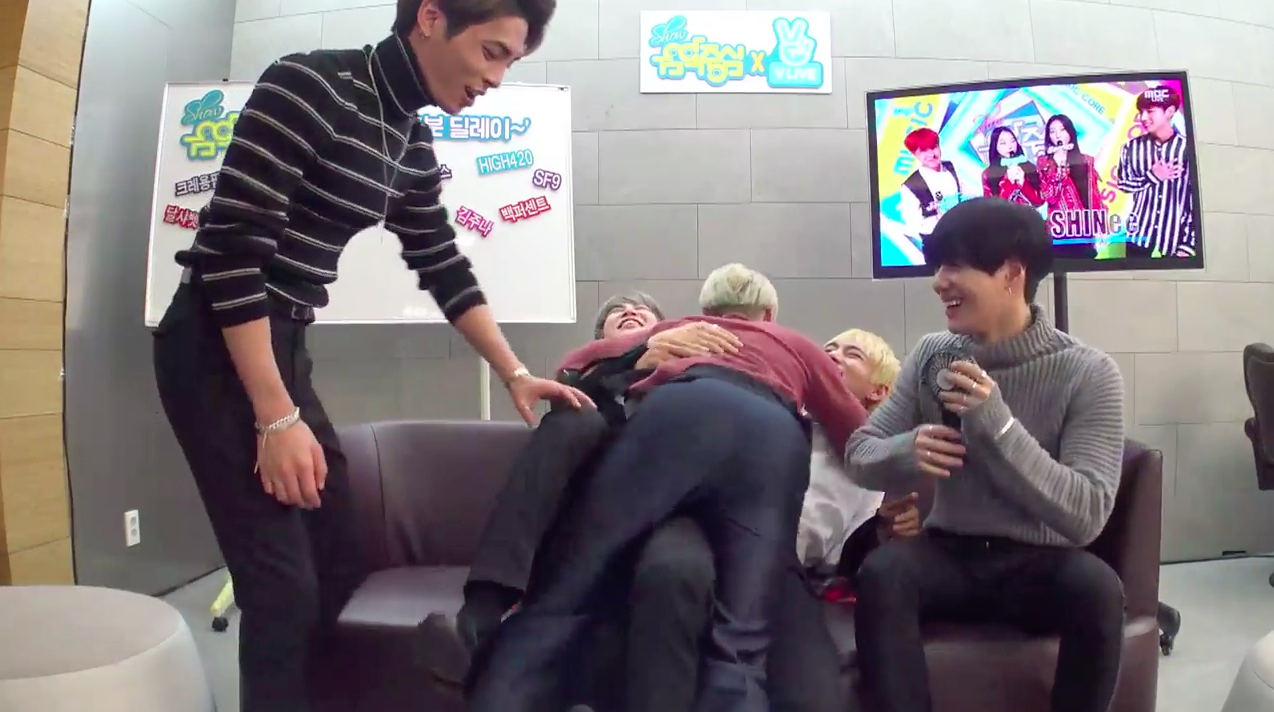 Watch: BTS, SHINee, GOT7, And More Show Their Inter-Group Love And React To “Music Core” Performances

“Music Core” is making fan dreams come true by airing another episode of artist reactions to their performances on the show!

On October 22, the music show aired a live broadcast entitled “5 Minute Delay” featuring the day’s “Music Core” artists and groups taking turns sitting on a sofa to watch the episode as it airs.

This week’s broadcast features lots of fun moments, including B1A4’s Sandeul happily singing along with himself on the screen, Apink jokingly wishing everyone a “Merry Christmas!” because of their red stage outfits, and Davichi watching their performance with Minkyung’s adorable dog. 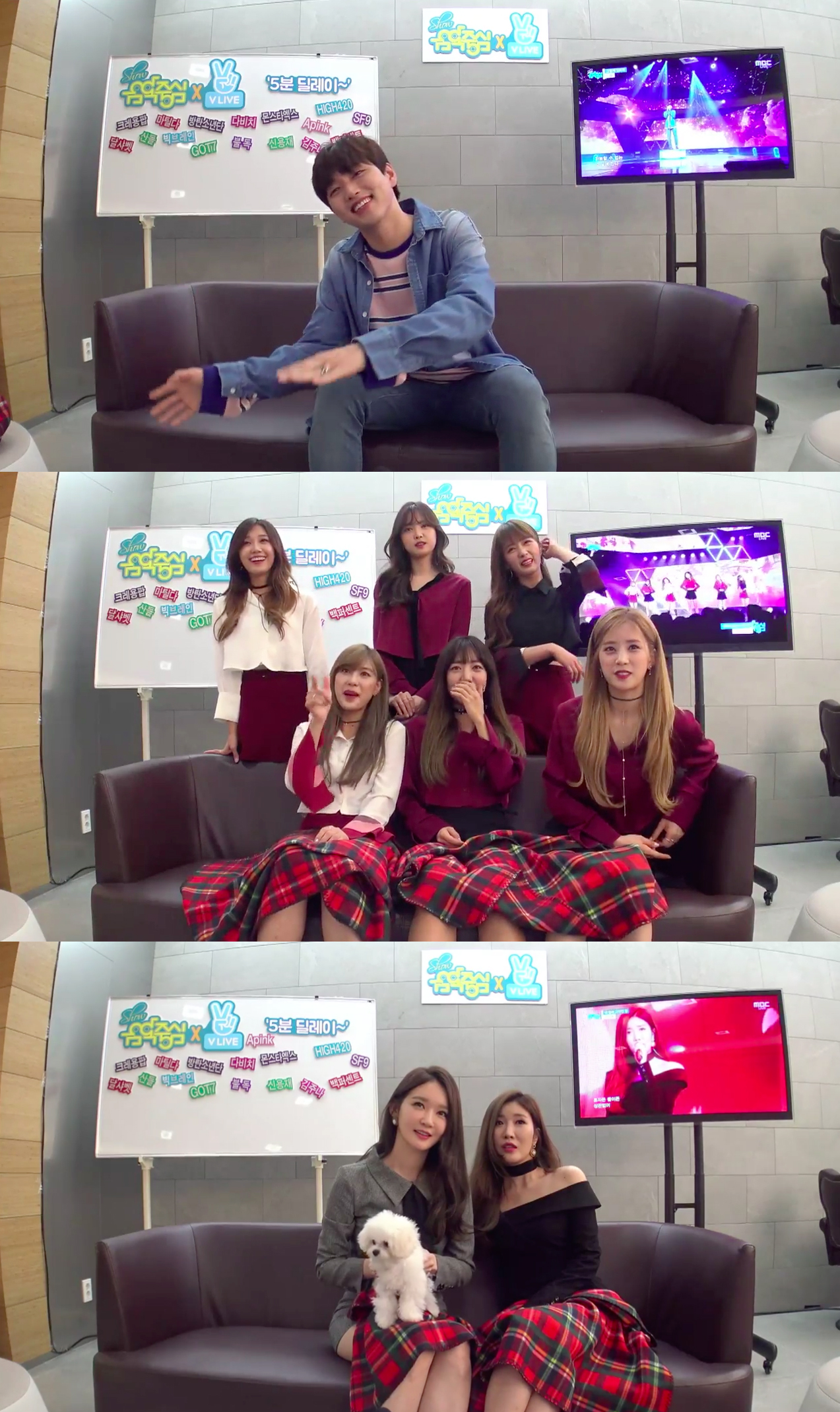 While monitoring their performance of “Hard Carry,” GOT7 gives a shout out to Youngjae who was unable to take part that day, and Jackson compliments JB on how well he does Youngjae’s part. Jackson also keeps fishing for praise himself, and at one point says, “The look in my eyes was really cool. Actually, I tried to do it like Namjoon [Rap Monster] in BTS. Thanks, Namjoon!” 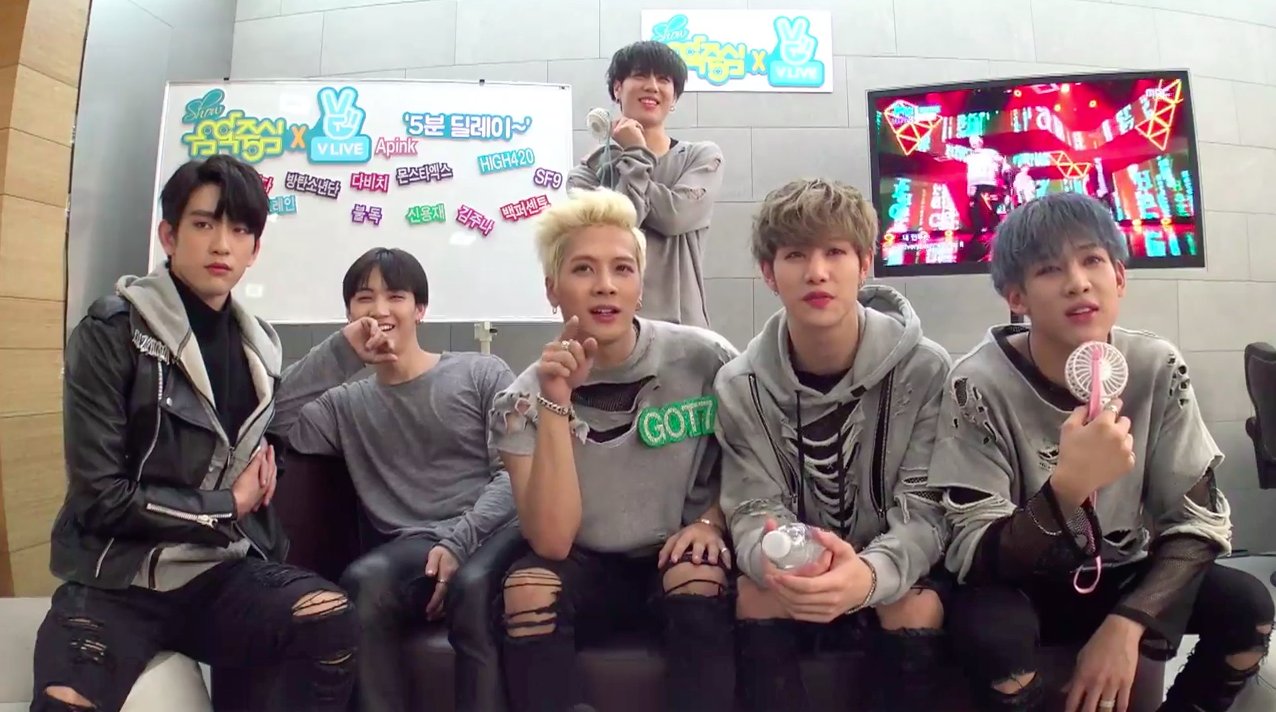 The fact that the groups have to quickly leave at the end of their performance before the next group comes in leads to plenty of great interactions as well. For example, Jackson adorably gives Rap Monster his beloved GOT7 nametag before he helps him off the sofa, while Suga jokingly yells at the GOT7 guys to hurry up and get out. 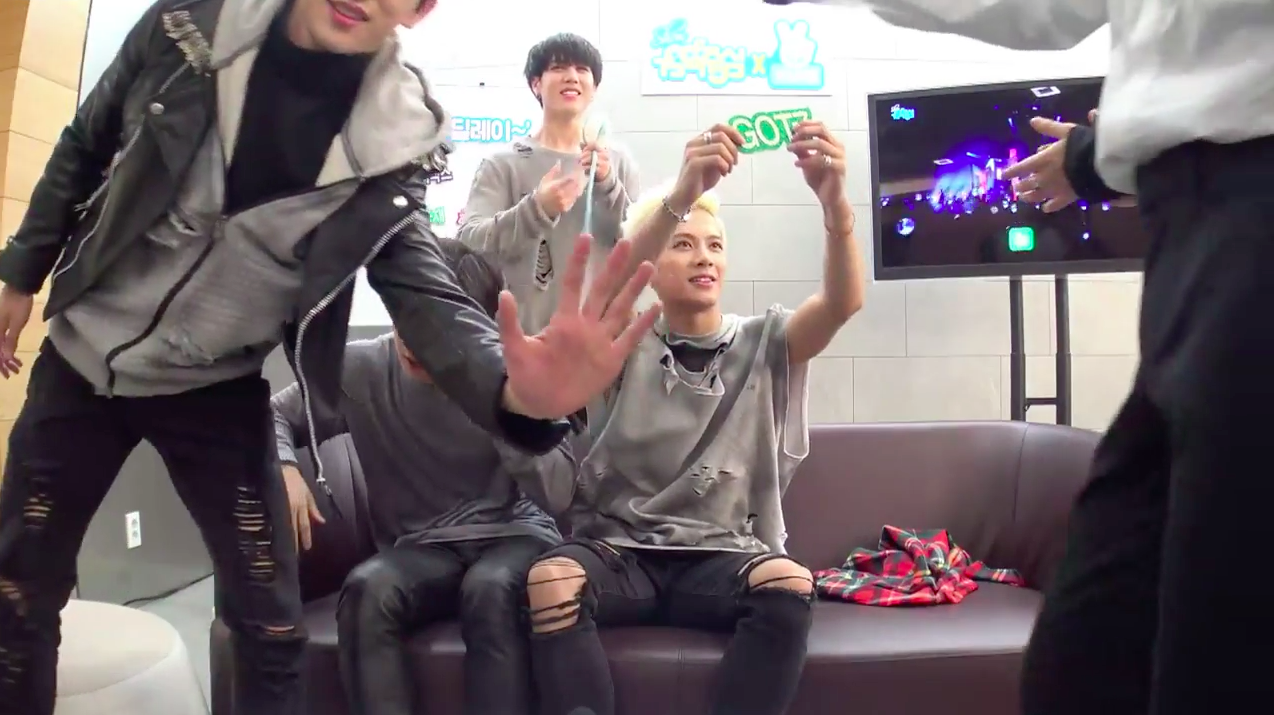 The BTS members are the noisiest of all this week as Suga keeps screaming out “J-Hope!” during their “Blood Sweat & Tears” performance, and the J-Hope love catches on so hard that the others can’t stop fanboying him either. Rap Monster also hilariously calls Suga a “mini Count Dracula,” and later says Jin looks like an “adult Dracula.” 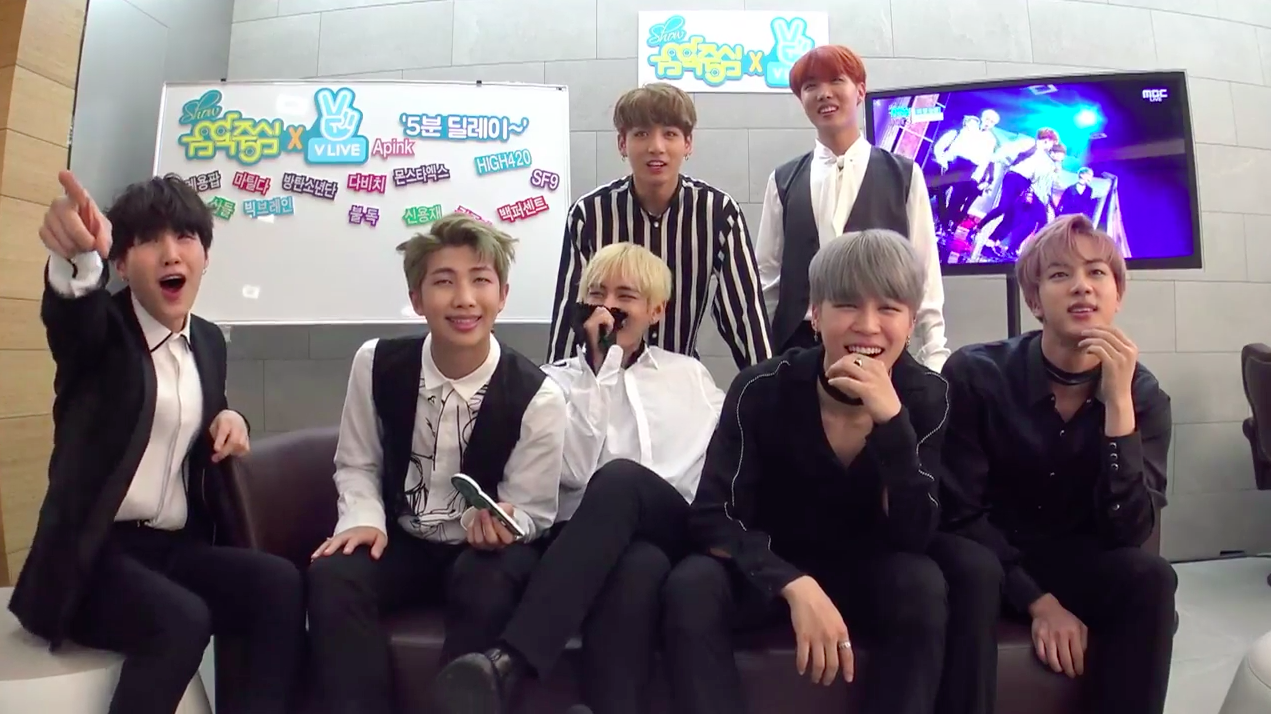 When SHINee comes in for their turn, Jimin and V can’t hold back their excitement as Jimin yells “It’s SHINee!” and celebrates with Taemin, before Minho tackles both Jimin and V to the sofa. 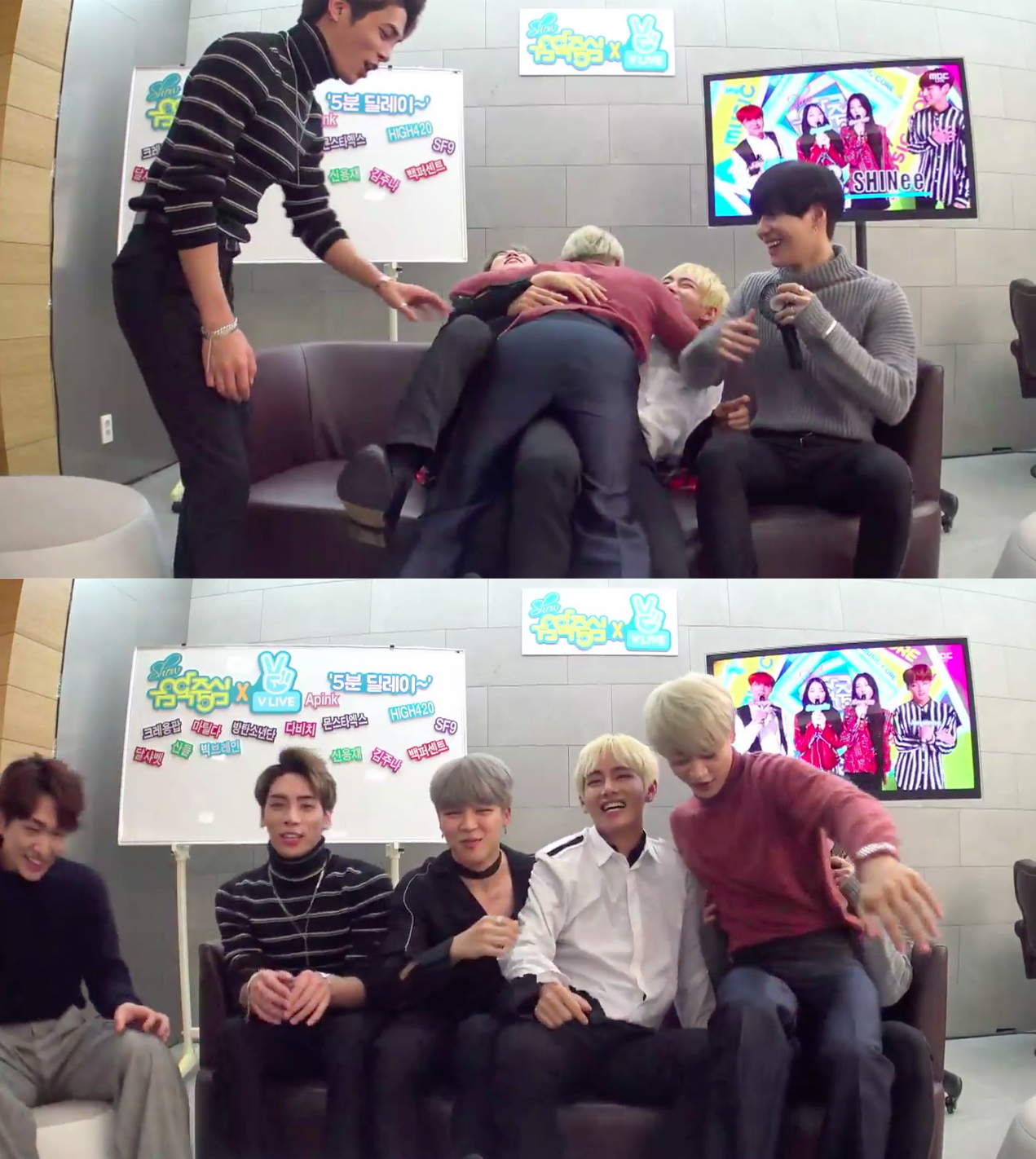 Once the pair leaves, SHINee settles in to watch their goodbye stage of “Don’t Let Me Go” and “1 of 1.” Key pretends to fall asleep at the beginning because everyone’s too busy monitoring their performance to talk, and then Minho hilariously announces he’s going to cover up their laps with the blankets there for women in skirts and shorts. 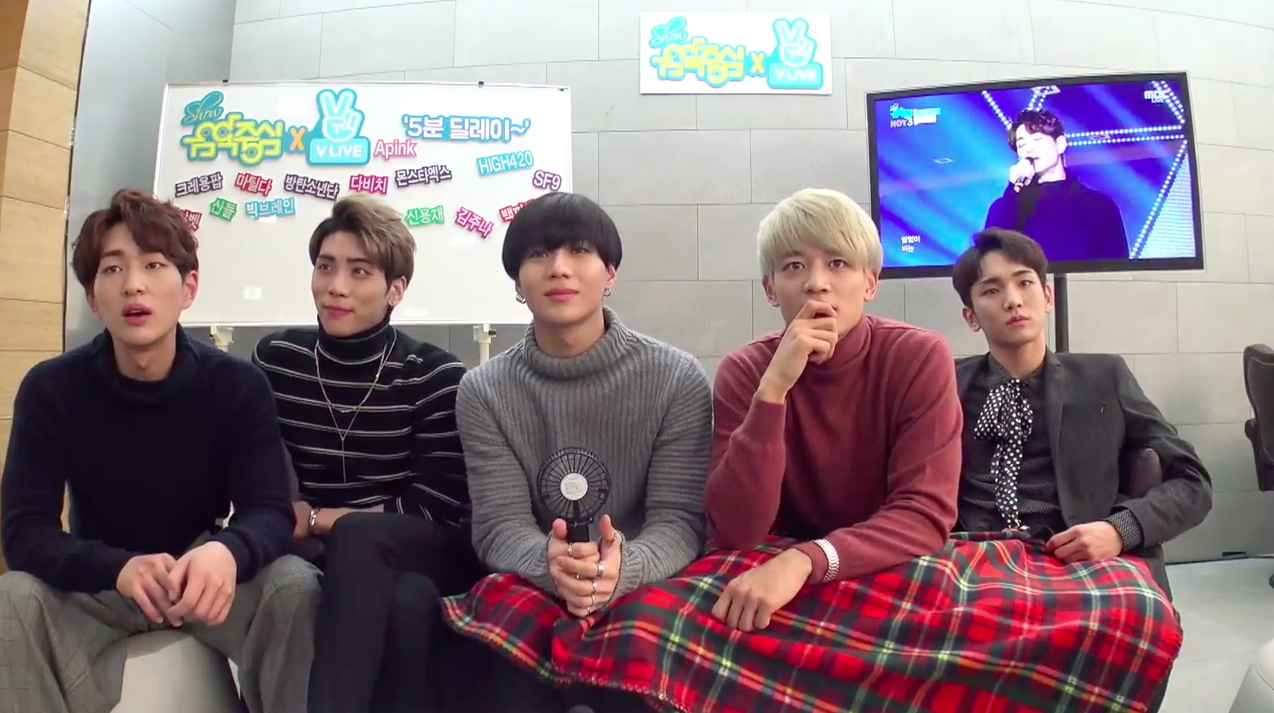 You can also watch all the performances from the show here.

This is the second episode of this reaction show (with the first episode airing last week), and its hosts have promised another episode to come next Saturday! What was your favorite moment from this week’s “5 Minute Delay”?