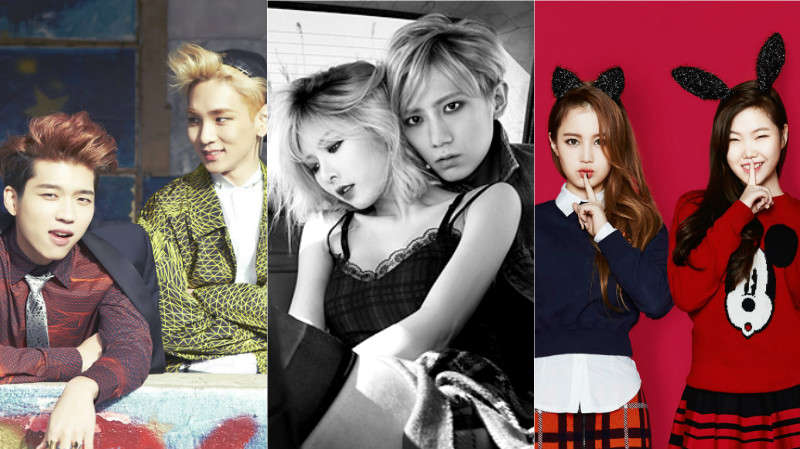 Any time K-pop idols unite for songs with members of another group, it’s destined to grant us a ton of amazing hits. A few of those collaborations were even full-blown promotions as project K-pop groups. In no particular order, here are some of those amazing project K-pop groups we definitely need to hear from again.

The chemistry between Jang Hyunseung and Hyuna is truly astounding, and it’s one of the main reasons why Trouble Maker stands out as such a phenomenal, steamy duo. It’s been entirely too long (three years, to be exact) since they’ve blessed us with a hit, so re-live their debut song “Trouble Maker” below.

Girls’ Generation’s Taeyeon, TVXQ’s Changmin, f(x)’s Krystal, Super Junior’s Zhoumi and Yesung, EXO’s Chen, and soloist Zhang Liyin join original member Jonghyun for S.M. The Ballad’s second round of promotions. But no matter which version of S.M. The Ballad you prefer, here’s to hoping there’s a third installation of the project group in the near future. Get a listen of Jonghyun and Taeyeon’s duet in the Korean version of “Breath” below.

Easily two of YG Entertainment’s most iconic power vocalists, Lee Hi and 2NE1’s Park Bom, united to form BOM&HI in 2013. The pair released a remake of Mariah Carey’s classic Christmas song, “All I Want For Christmas Is You,” fitting for their December debut. It’s been three years since then, and we’d love to hear the duo return for a less Christmas, more in-your-face dynamic EP.

Toheart consists of real life friends SHINee’s Key and INFINITE’s Woohyun, and their songs are about as fun and lively as you’d expect them to be. The two are best friend goals to the ultimate level, and we’re definitely wishing they’d light up the stage with their explosive talent and charisma one more time.

Okay, okay — so it hasn’t been too long since Triple T debuted. But when the group consists of 2AM’s Jo Kwon, miss A’s Min, and Girls’ Generation’s Hyoyeon, how can we not immediately crave another comeback? They give us a high quality club banger in “Born to Be Wild,” and it’s only right that they return soon with a song equally as hype.

Coed groups really should be more of a thing, and YTEEN is an easy example why. Consisting of all seven members of MONSTA X and seven members from Cosmic Girls, YTEEN gives us their all for debut single “Do Better.” Even if the group only formed for commercial promotions, we definitely hope to see the unit play up their potential in future releases.

YG labelmates Lee Hi and Akdong Musician’s Lee Soo Hyun banded together to form HI SUHYUN in 2014, and we haven’t stopped wishing they’d make a comeback since. Though iKON’s Bobby isn’t technically a member of the duo, it wouldn’t hurt to hear him feature on another one of the duo’s songs, too.

Nasty Nasty is the heavenly combination of ZE:A’s Kevin with Nine Muses’ Kyungri and Sojin. And just like their name suggests, their songs and image are every bit as steamy. The trio dropped a racy music video for their debut single “Knock” in 2014, and it’s easily been on all of our minds ever since. We definitely need (and are way overdue) for their comeback.

What project K-pop groups do you wish would make a comeback? Let us know in the comments below!