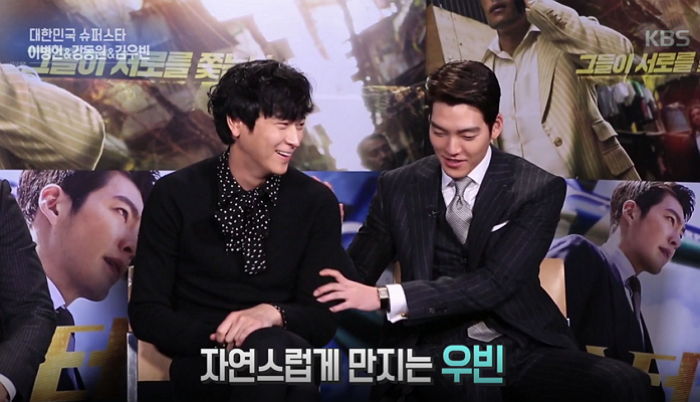 It looks like there is another bromance in the making!

On November 19, KBS2’s “Entertainment Relay” revealed an interview with Kang Dong Won, Kim Woo Bin, and Lee Byung Hun, the three talented actors of the upcoming movie “Master,” which boasts one of the most star-studded casts of this year.

Kim Woo Bin is the youngest amongst those three actors and he opened up about how he felt on the set, saying, “There was a lot of pressure on the set. I was the second from the youngest among all of the actors, so I thought to myself that as long as I do well, it will be okay.”

As soon as he answered that, Kang Dong Won, who was seated next to him, chimed in, “Kim Woo Bin has an affectionate style. He likes to touch you,” as everyone cracked up laughing.

“Master” is a crime action film riddled with deceit, as a criminal investigation team hunts down the con artist and brains behind a major fraud case. The film has released its first teaser in September and is regarded as one of the most anticipated films of the year.