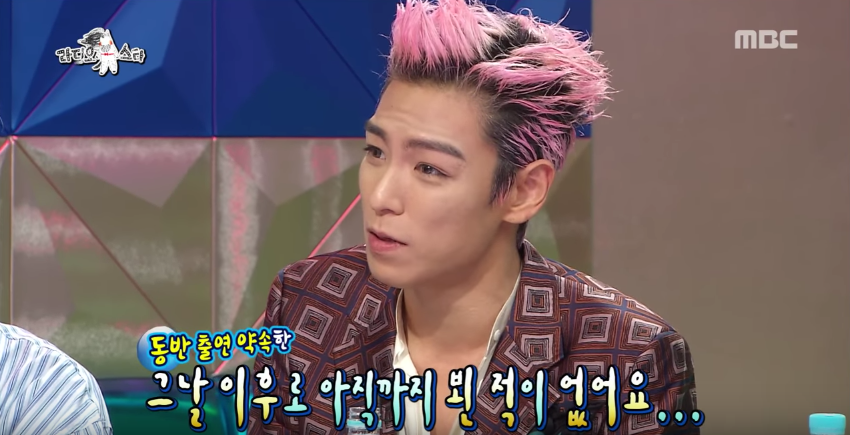 BIGBANG’s T.O.P Talks About His Habit Of Uploading Strange Photos On Instagram

On December 21, BIGBANG were guests on MBC’s “Radio Star,” where they opened up about their personal lives and revealed interesting tippets like the inspiration for Taeyang’s “Eyes, Nose, Lips.”

When the topic of his infamous Instagram photos were brought up, T.O.P joked that he probably was the celebrity with the highest number of unfollows. He said, “I understand why fans might do so.” G-Dragon amusingly added, “I almost unfollowed him too.”

T.O.P is well-known for sometimes uploading weird and inexplicable photos on his personal social media account, something even his own members can’t understand.

For example, right before their comeback, the rapper uploaded a now-deleted picture of himself sitting on the toilet. “It was really a very shocking picture,” Taeyang confessed.

T.O.P explained that it was to promote “FXXK It,” but it ended up causing more misunderstandings than he intended. He revealed that he even got a text from Yang Hyun Suk after that picture went live. It hilariously said, “You’re either crazy or you just don’t have common sense. I think it’s both.”

Watch the whole, hilarious episode below!

BIGBANG
Radio Star
T.O.P
How does this article make you feel?