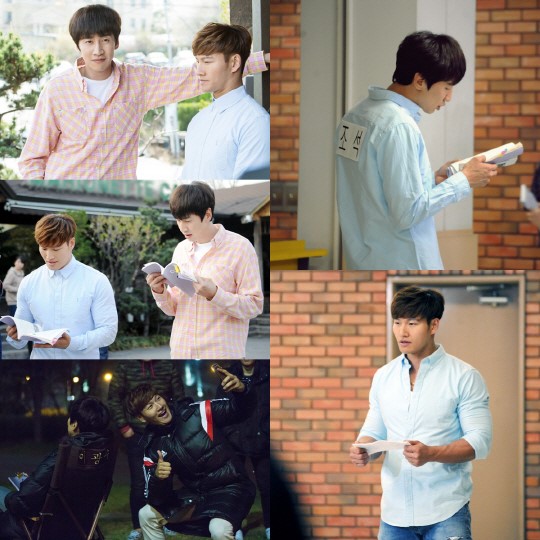 They are seen studying their scripts most of the time but they also enjoy their time together. Lee Kwang Soo shows a playful smile towards the camera, and Kim Jong Kook snaps a selfie with Lee Kwang Soo in the background.

During this day of filming, Lee Kwang Soo really gave it his all to portray realism in his acting. Moreover, Kim Jong Kook’s closeness with Lee Kwang Soo was proven with this because he agreed to help Lee Kwang Soo right away when the cameo was offered.

Kim Jong Kook’s talented ability to play both roles of twins was especially memorable during this episode. Although the filming went on from day to night, both of them maintained their professionalism and stayed focused.

Meanwhile, “The Sound Of Your Heart” is a sitcom based on the legendary episodes of the web-toon of the same title. It centers around the comical happenings that occur to Jo Suk (Lee Kwang Soo) and his family.

Lee Kwang Soo
The Sound of Your Heart
Kim Jong Kook
How does this article make you feel?