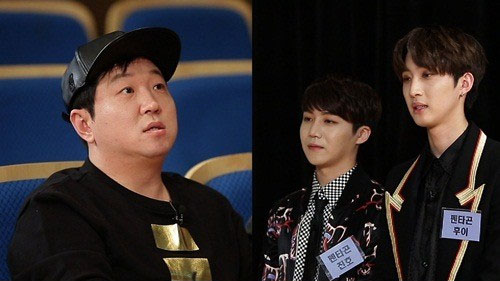 This season, the two are on the hunt for singers worthy of recording a track they describe as a “national cheer song.” Auditions attracted a number of surprising idol stars, including ballad singer Jung Seung Hwan, ASTRO, KNK, and PENTAGON.

The eager contenders pulled out all the stops while trying to win over the panel of judges, which included special guest judge Jackson of GOT7, who previously appeared on the program as a part of its project idol group, Big Byung.

KNK began the series of auditions by performing a special stage dedicated to Yong Junhyung’s group BEAST, while ASTRO kept it sexy with some shameless abs-revealing choreography.

However, Jung Seung Hwan took a different approach and sang a passionate cover of the classic trot song, “100 Years” by Lee Ae Ran. The unexpected song choice took the judges by surprise, who then rose from their chairs to dance along.

So who will make the cut? Find out when the episode airs on January 5!