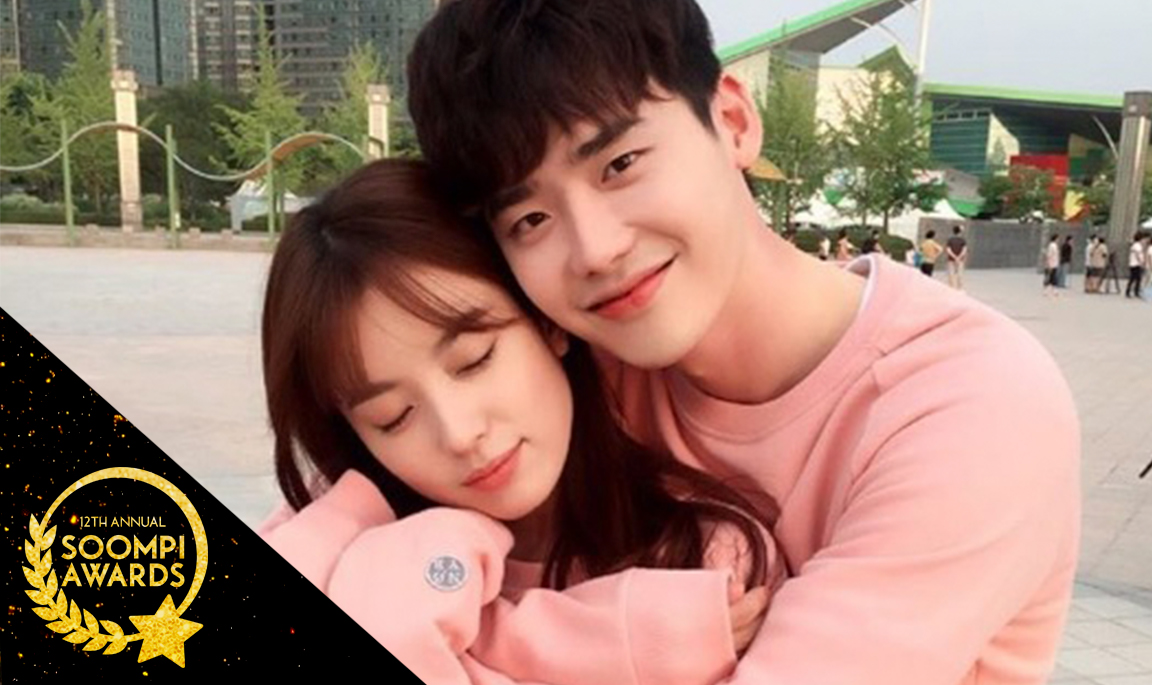 This past year was full of some of the most epic K-drama love stories. From a soldier falling in love with a doctor, to a mermaid falling in love with a con-artist, there really were so many unique and heart-fluttering love lines. These couples showed us that love can conquer all and that it can also transcend time, status, and even space!

Here are the nominees for the Spottoon Best Couple in the 12th Annual Soompi Awards.

There was probably not a more tragic and sadder love story than the one between Wang So (Lee Joon Gi) and Hae Soo (IU) in SBS’s international sensation, “Scarlet Heart: Goryeo.” This pair had so much pain and heartbreak within their relationship that it left fans and viewers hoping for their happiness until the very end of the drama. There’s always something about a black sheep falling in love with the damsel in distress that is just so romantic and this couple did an excellent job of portraying it.

In KBS’s “Moonlight Drawn by Clouds,” Park Bo Gum played Lee Young, the crown prince who falls in love with his eunuch, Hong Ra On, played by Kim Yoo Jung. These two were, simply put, beyond adorable. Their relationship on-screen showed so much innocence and purity that it was hard not to fall for them and it was even harder not to get butterflies as their love for each other deepened. Their cute smiles, romantic gestures, and heart-stopping one-liners were so irresistible! It’s no wonder this pair got so much love from the public and were recently awarded Best Couple at the KBS Drama Awards! Another KBS Drama Awards Best Couple winner: The Song-Song couple. What more can we say about this power couple? Yoo Shi Jin (Song Joong Ki) and Kang Mo Yeon’s (Song Hye Kyo’s) relationship in KBS’s “Descendants of the Sun” seemed so real and genuine that fans were (and still are) desperate for them to date in real life. The witty and sarcastic lines that were thrown back-and-forth balanced the emotionally intense scenes of near death and made this an entertaining pair to watch. It helped that these two were easy on the eyes. Would it be too much to ask for them to star in another drama together?

A mermaid falling in love with a con-artist: what a fairy tale. Sigh. These two characters in “The Legend of the Blue Sea” made quite the unlikely pair, but they still managed to steal our hearts with their love for each other; it also helps that the actors, Jun Ji Hyun and Lee Min Ho, are considered to be two of the biggest Korean stars in all of Asia. It was great seeing Heo Joon Jae (Lee Min Ho) resisting the urge to fall in love with Shim Cheong (Jun Ji Hyun), but failing terribly, not to mention Shim Cheong’s adorable puppy-love and adoration for Joon Jae.

Talk about some crazy chemistry. This couple was off-the-charts sizzling. So much so that it sometimes made us weak in the knees! They the interviews leading up to the drama and magazine shoots oozed and easy chemistry. In their drama, “W,” Oh Yeon Joo (Han Hyo Joo) and Kang Chul (Lee Jong Suk), Oh Yeon Joo’s ideal type comic book character, were so in love with each other that Kang Chul managed to fall in love with her twice – swoon!

Already a nominee, Park Bo Gum is showing us that he’s pretty much adorable no matter who his co-star is. What made this couple from “Reply 1988” so memorable was the intense love triangle that Deok Sun (Hyeri) and Choi Taek (Park Bo Gum) were involved in and how they were able to overcome it in order to be together. It was adorable seeing Deok Sun tease Taek and teach him a thing or two about living life. There’s nothing quite like a romantic relationship that stems from a friendship. Deok Sun’s bright and childish personality perfectly balanced the genius, but clueless Taek. They always looked like they were having so much fun together!

A hot and heavy couple. Oh Hae Young (Seo Hyun Jin) and Park Do Kyung (Eric Mun) brought “Another Oh Hae Young” to life as they were able to show a depth of passion and angst in their love story. Their fate together came with a lot of twists, turns, and unexpected drama, but these are also all the reasons why this drama became such an unexpected success. This relationship came with a lot of fights, but passionate make-ups, and lots of intense kiss scenes that viewers couldn’t get enough of. Really, a memorable couple!

In SBS’s “Doctors,” the contrast between Park Shin Hye’s tough tomboyish character, Yoo Hye Jung, and the Kim Rae Won’s responsible and level-headed character, Hong Ji Hong, made this unlikely pair so enjoyable to watch. I loved Ji Hong’s persistence and how his love for Hye Jung was basically never ending. Even after years of being apart, he still maintained his love for her, which K-drama fans can totally dig. These two had so much charm on screen that it was hard not to ship them. I also can’t fail to mention those romantic kiss scenes!

What a beautiful couple. They’re pretty flawless and really easy to look at, aren’t they? What made this couple even hotter was their love story in the romantic action-packed tvN drama “The K2.” Kim Je Ha (Ji Chang Wook) played Go An Na’s (YoonA’s) tough and loyal bodyguard, who ends up falling in love with her. Talk about romantic! The two characters were so similar to each other with their history and baggage that they were the perfect pair. Although it seemed like a simple love story, there was so much passion and disparity to it that it gave you chills. When you put Gong Hyo Jin in a romantic drama, it’s almost guaranteed to be a hit. Gong Hyo Jin played Pyo Na Ri in “Don’t Dare to Dream (Jealousy Incarnate),” a weather forecaster who had a three-year crush on her co-worker, Lee Hwa Shin (Jo Jung Suk). I have to hand it to Jo Jung Suk because what made this couple so hilarious was how bitter and stubborn he was. I couldn’t help but laugh at how angry he would get at everyone and himself. As the drama progressed and Hwa Shin began to have feelings for Na Ri, the drama became more entertaining to watch as his character started to slowly change. There is nothing more romantic then watching a hard-headed and angry man turn into a soft-hearted and loving one all because of love. These two have to do another drama together, because their personalities were a hilarious fit. So much chemistry!

See the nominees here and vote for your favorite!

binahearts is a Soompi writer who can be most often seen singing her heart out at karaoke, walking her dog, or indulging in dessert. Her current obsessions include Song Joong Ki, Big Bang, “Goblin,” and “Weightlifting Fairy Kim Bok Joo.” Make sure you follow binahearts on Instagram as she journeys through her latest Korean crazes!