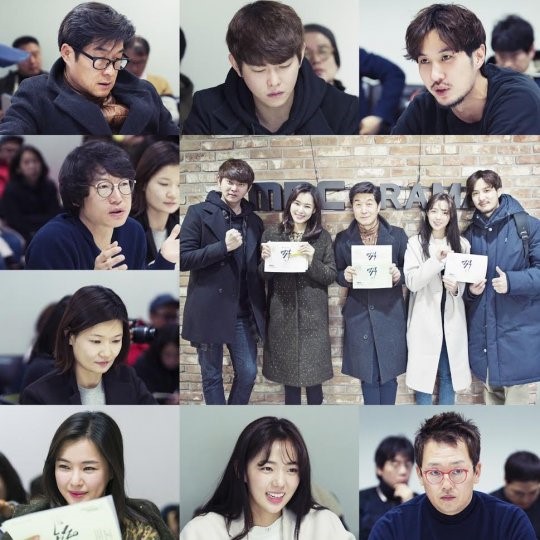 The drama revolves around the life of the historical figure Hong Gil Dong from the period of King Yeonsan’s rule. It is not to be confused with the fictitious character of the novel The Tale of Hong Gil Dong, although the novel was based on the actual person’s life story.

King Yeonsan (played by Kim Ji Suk) may have been born with a golden spoon in his mouth, but he could not win his people’s hearts. On the other hand, Hong Gil Dong (Yoon Kyun Sang) was born with a wooden spoon, but managed to gain the people’s trust. Their story is a stark contrast that explores the virtues needed to win over the populace.

The script reading proceeded in an amicable atmosphere as the actors asked after each other, and behind-the-scenes stories were told. Director Kim Jin Man talked about how Yoon Kyun Sang and Chae Soo Bin (who plays Song Ga Ryeong) had battled the cold when filming in the mountains the day before. He also said that Ah Mo Gae (Kim Sang Joong) has a very significant role in the first half of the drama, so he and the child actors had filmed until they almost collapsed.

The drama carries a heavy message that it aims to deliver in a superb manner. There is first the parallel between the happy and carefree Hong Gil Dong who travels around with his possessions on his back, and his father, Ah Mo Gae, who is determined not to pass his slave status down to his son. Next, there is the antagonist King Yeonsan, a cruel and ruthless tyrant. There is also Jang Nok Su (Honey Lee), the king’s consort whose beauty could launch a thousand ships, as well as the aforementioned Song Ga Ryeong, a bubbly and cheerful girl.

The director also took the opportunity to praise the actors for moulding to their roles well. In encouragement, he said, “Let’s keep up with the drama’s title, and steal the viewers’ hearts like Hong Gil Dong stole the people’s hearts.”

Writer Hwang Jin Young also said, “I have full faith [in this]. With all these brilliant actors and staff, it’s like we have amassed an army. I promise to produce a script that will capture all your efforts.”