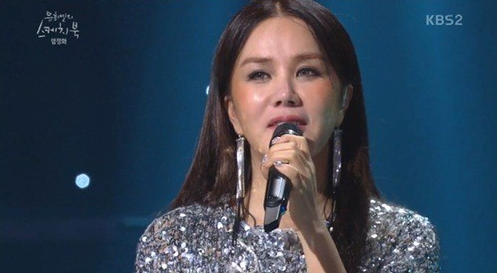 Uhm Jung Hwa, who returned to the music scene for the first time in eight years, has opened up about the immense struggles she endured to return as a singer after battling thyroid cancer.

On January 7, she guested on “Yoo Hee Yeol’s Sketchbook” and revealed the challenging obstacles she faced with her health. She said, “It was thyroid cancer. I had to get surgery, but during the surgery, it damaged my nerves. Actually, I didn’t talk about this before I made this album. I thought there might be problems if I revealed that I had hurt my throat and so I just endured them by myself. One part of my vocal cords became paralyzed and I couldn’t talk for eight months.”

She continued, “I was so confused and taken aback. I couldn’t talk, couldn’t sing, and there was nothing that I could do. That time was so difficult for me. I didn’t get any shots to fix my vocal cords and instead practiced to overcome it,” as the audience applauded her courage.

She also opened up about recording her album, revealing, “When I first went in to the studio to record, I was so happy. I was so emotional about my throat and about how time had passed. I didn’t think I could ever step into a recording studio again, so I was very grateful this time around. I didn’t appreciate it when I didn’t have any problems with my voice. I realized how precious everything I have is. I realized it after I had lost it, when I didn’t think I’d find it again. I had heard that I would never be able to sing again. But I thought that if I didn’t overcome this, my life would be sad and I would be missing out. Wouldn’t it be awesome if I was able to overcome it? It’s like a movie. I wanted to win through it. I worked really hard.”

Such an inspirational tale!