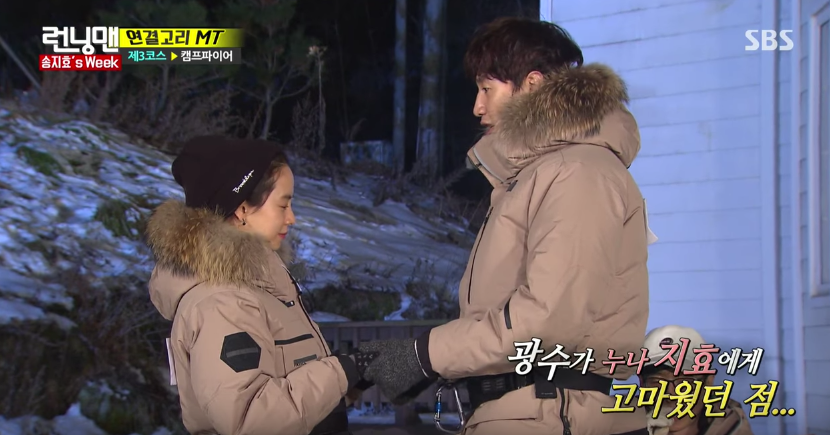 Lee Kwang Soo and Song Ji Hyo may not be related by blood, but the strength of their sibling-like bond is beyond doubt.

On the January 8 episode of SBS’s “Running Man,” there was a “Thank You, Sorry, I Love You” segment where the members would tell each other in pairs what they felt thankful for, and what they felt sorry for. As expected, there were many tears, but also lots of laughter.

Lee Kwang Soo then continued, “Six years ago, you called me over and bought me barley-dried corvina (fish), and also a fan when I moved. You also often sent me messages to congratulate me, and gave me words of encouragement. Thank you.”

Song Ji Hyo’s grateful words were equally sincere, but infinitely more shocking, as the other members appeared to have not known about it. She said, “Three years ago, I quarreled with my mother and left my home [temporarily]. I had nowhere to go, and you offered me your place to stay. Thank you for that.”

The touching mood was momentarily destroyed by Lee Kwang Soo when he jokingly commented, “After words like these, I should suddenly say ‘I love you’ right?” But the members were still reeling from the shock of Song Ji Hyo’s confession, and started suspecting any possible romance between the two.

But Song Ji Hyo clarified that she didn’t go to his house in the end, and Lee Kwang Soo explained, “Because I was filming, I wasn’t home. It did seem a bit strange after I offered.”

The KwangMong siblings’ heart-to-heart talk then ended warmly as they thanked each other for being there, and finished with a hug.