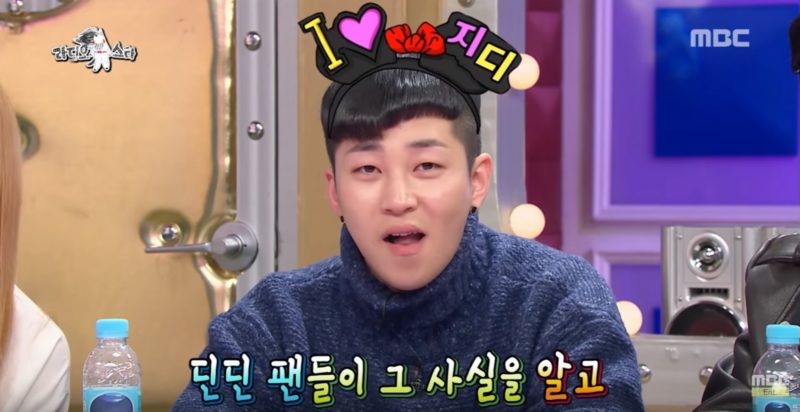 Rapper DinDin Says His Fans Encourage His Love For G-Dragon

Rapper DinDin really looks up to G-Dragon a lot.

On the January 11 episode of MBC’s “Radio Star,” DinDin appeared as a guest alongside fellow rappers BewhY and Zizo, as well as BLACKPINK’s Jisoo and Rosé.

During his segment, DinDin did an impersonation of G-Dragon singing “If You.” It was so on point from the lilting voice to the 45-degree head tilt that he had the entire cast laughing, proving his status as an up-and-coming comedian.

He also talked about how his love for G-Dragon led his fans to gift him BIGBANG merchandise on his birthday. The presents include limited edition BIGBANG albums, a bromide poster of G-Dragon, and various models of BIGBANG’s official light sticks. The MCs teased him, saying that his fans must think of him as a famous G-Dragon fan instead of an artist.

Despite his immense admiration for G-Dragon, DinDin said that he’s not ready to meet him yet. He hopes that he can become a successful rapper first, so that G-Dragon will praise him when they meet. He also dreams of becoming a close friend that G-Dragon can call whenever he’s feeling down.

BIGBANG
DinDin
G-Dragon
Radio Star
How does this article make you feel?