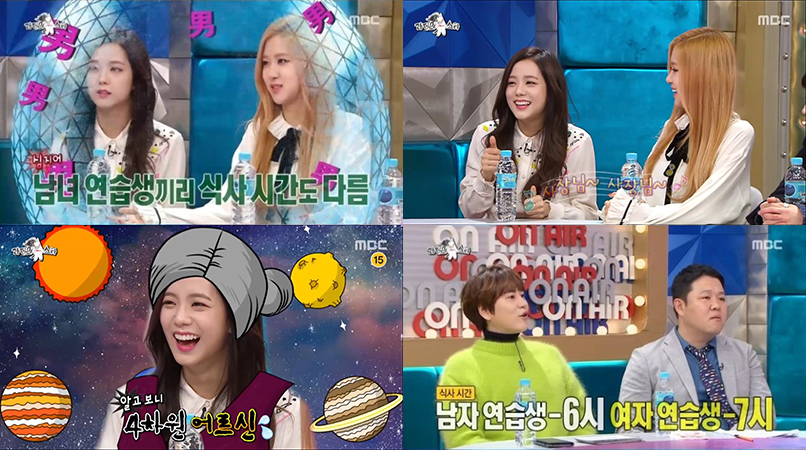 On January 11’s episode of MBC’s “Radio Star,” BLACKPINK’s Jisoo and Rosé talked about restrictions that are placed on artists and trainees signed under YG Entertainment.

The MCs started the discussion by saying, “We heard there were six restrictions listed on contracts for YG. Drinking, smoking, clubbing, driving, plastic surgery, and dating are all banned. Is that true?”

The BLACKPINK members confirmed the restrictions listed were true. The surprised MCs asked, “If it’s that extreme, isn’t that basically living a monastic life?”

Rosé responded, “I wasn’t allowed to get a driver’s license. However, exceptions can be made if you discuss it with the company. The restrictions are just there to tell you not to do any of those things secretly.”

Jisoo also shared that male and female trainees at YG are kept separate. She revealed, “Even eating times are different. At YG’s cafeteria, if the boys eat at 6 o’clock, the girls will eat at 7 o’clock.”

She continued by saying that if the male trainees are still finishing up their meals past their scheduled time, the managers will cover them up so the female trainees cannot see them. However, Jisoo and Rosé concluded that it’s only while training, and everything becomes okay after debut.

BLACKPINK
Radio Star
Jisoo (BLACKPINK)
Rosé
How does this article make you feel?