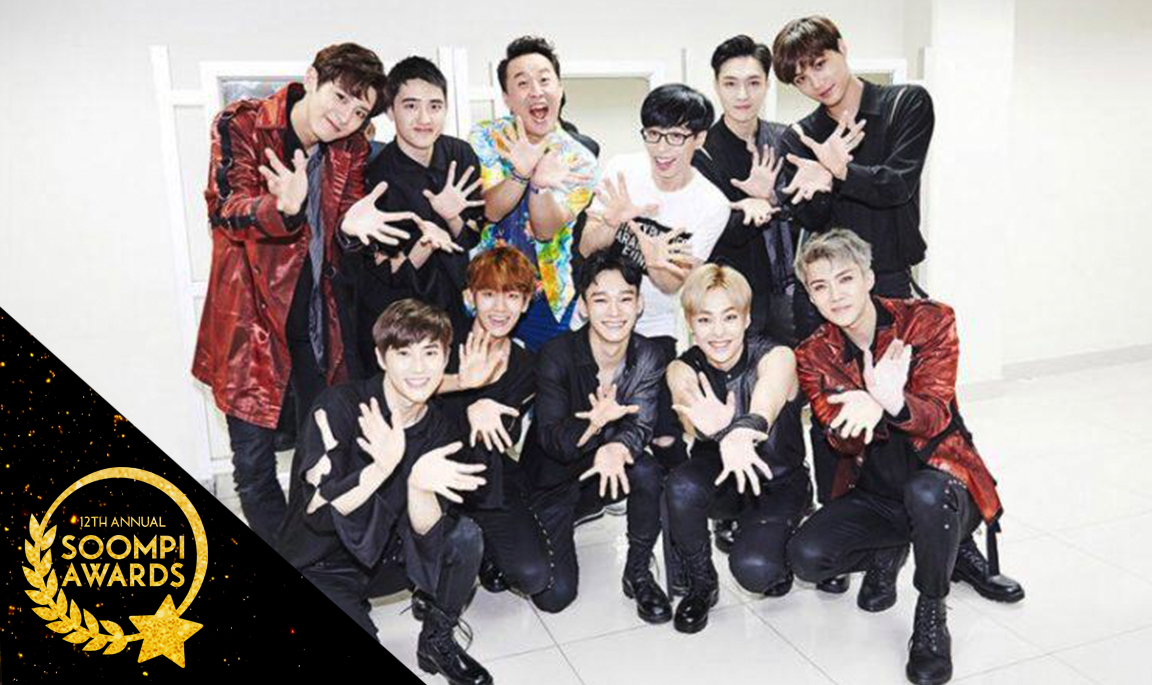 Here are the nominees for 2016’s Best Collaborations:

With beautiful lyrics that look forward to a hopeful future with a vivid, dream-like music video to match, Jung Eun Ji, the main vocalist of Apink, makes our hearts melt and puts us at ease with “Hopefully Sky.” Accompanying Jung Eun Ji is Harim, who plays the harmonica in the background, adding a folky touch to the song that makes this a truly feel-good hit. According to the singer, this earnest song was inspired by her father, who works overseas to support the family.

In this highly anticipated collaboration, singer-actress Suzy’s delicate and refreshing voice melds perfectly with Baekhyun’s smooth vocals. The song, which is about falling in love with another person and the fluttery feelings that come with it, is perfectly matched with playful, jazzy piano notes in the background — giving the song a bit of soul. And to no one’s surprised, “Dream” received the “Best Collaboration” award at the 18th Mnet Asian Music Awards, as well as an award for Best R&B Song at last year’s Melon Music Awards.

Appropriately titled “Thursday Night,” this song is the perfect accompaniment to a chill Thursday (or Monday, or Tuesday, or Wednesday…) evening with some friends. Urban Zakapa’s unique voices make this song an easy one to listen to over and over, and who can complain about Beenzino’s lines peppered throughout the song?

The music video for “Lonely Night” by Leessang’s Gary and Dynamic Duo’s Gaeko is such a relevant, contemporary issue: it features a couple going about their busy work days while missing each other and hoping to end the night together. A perfectly appropriate anthem for the dilemmas modern couples face today. According to Gary, the idea for this song transpired after he had watched the Korean drama “Incomplete Life.”

“Inferiority Complex,” a song which Block B’s Park Kyung himself wrote and produced, begins deceptively with a smooth melody but turns immediately into an upbeat, modern hip hop song featuring Girlfriend’s Eunha. The music video is also just as adorable, with vignettes of Park Kyung and Eun Ha acting as a jealous couple in various scenes, from modern-day coffee houses to black and white film.

Although Crush is a relatively new name in the Korean entertainment scene, he’s an artist with widespread international acclaim, making us often forget that he is a newer face. His smooth, slick vocals are difficult to resist, and it comes together so well in this R&B song with the voice of K-pop veteran Taeyeon. The music video is also a breathtaking feat; it depicts Crush walking around the streets of a brightly-lit Japan on a cold, winter day, as he contemplates the things he shouldn’t forget.

Dean is also a newer face on the scene, but he’s also someone who’s made quite the name for himself, not only with his smooth vocals, but also with his fantastic producing abilities, attracting artists from all over the world to work with him. In D Half Moon, he collaborates with Gaeko to produce a song with not only soulful, deep lyrics, but also a music video with stunning visuals that deserves to be a work of art on its own.

Eric Nam confesses his love to us in “Can’t Help Myself,” featuring Loco’s upbeat rapping. This song is a truly great summer jam, with an alternative-rock vibe and lyrics by the punchline genius Tablo to match. We also can’t help ourselves from listening to this so many times.

Davichi and K.Will are two vocal powerhouses in the K-pop industry; there was no doubt that the combination of these vocalists would produce an incredible collaboration. K. Will’s distinguishably dense, yet smooth voice harmonizes perfectly with and brings out the best of the ladies of Davichi in “You Call It Romance.”

What’s better than a soothing, warm cup of coffee on a cold, winter morning? Honestly, not much — but this song featuring Superstar K’s Eddy Kim and the multi-talented actress/model/singer Lee Sung Kyung is definitely on par with a good ol’ cup of morning joe.

Yoo Jae Suk is not only popular with the crowd as a comedian, but he is also widely admired for his phenomenal dancing skills. In “Dancing King,” he put his dance skills to the test and had to keep up with the athleticism of the members of EXO. Fortunately, the two parties seamlessly become one as evidenced by the music video. It’s definitely a hit song that makes us want to dance, too.

The ladies of Oh My Girl are known for their angelic voices and girlish melodies. So when we found at that the group would collaborate with two extremely dynamic characters — Haha and reggae artist Skull — we were a little skeptical. And yet, the polarity between the two collaborators works to their advantage in the summery song “A-ing” that makes us want to go take a vacation on paradise island.

When BewhY and C Jamm eventually became the top two competitors on Season 4 of “Show Me the Money,” viewers went wild because, well, the two deserved it. So it comes as no surprise when the two outstanding rappers – as well as childhood best friends who have watched each other grow as artists long before their on-stage “rivalry” ensued – came together for “Puzzle,” the song was an instant hit. A song appropriate both for a casual car ride and for dancing in the club, it won “Best Rap Performance” at the 2016 MAMA.

Jimin’s unique, high-pitched rap is well-known amongst both regular fans of K-pop and avid watchers of Mnet’s “Unpretty Rapstar,” and it goes so well with the candy-colored music video that accompanies “Call You Bae,” which features Xiumin of EXO. The upbeat song details the highs and lows of an imperfect relationship, all the while remaining very catchy.