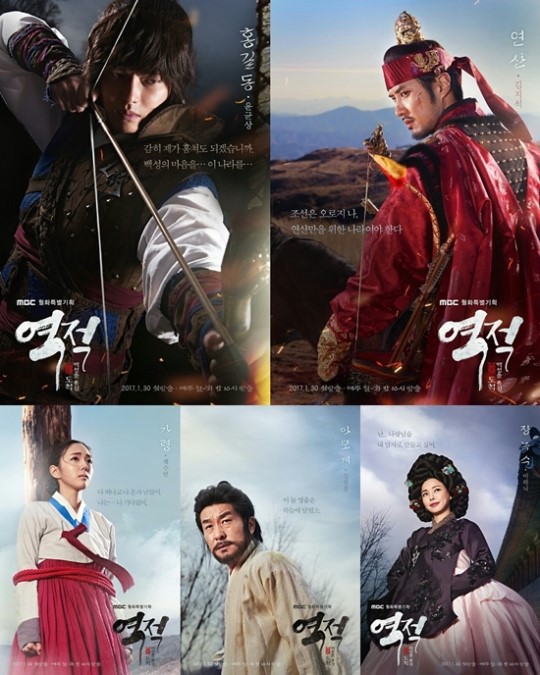 “Traitor Hong Gil Dong” aims to put a new spin on the well-known titular character from Heo Gyun’s story. The drama will re-examine the life, love, and history of Hong Gil Dong, who lived in the time of King Yeonsan of Joseon.

Kim Sang Joong will play the role of Ah Mo Gae, a slave who wants his children to live like human beings. His tagline reads, “The thread of this man’s life is tied to the heavens.”

Yoon Kyun Sang plays the titular Hong Gil Dong, who steals the hearts of the peasants. In the poster, where he is holding a bow and arrow, his tagline reads, “Do I dare steal this? The hearts of the people… and the country…”

Chae Soo Bin plays Ga Ryung, who is tied to a post as she faithfully awaits Hong Gil Dong’s return. Her tagline reads, “Although everyone has left and I am alone, I… will wait for you.”

Kim Ji Suk plays the Yeonsan, the tyrannical king who feels threatened by Hong Gil Dong’s actions. His tagline reads, “Joseon is a country that belongs only to me, Yeonsan.”

Honey Lee, who has majored in traditional music, plays a gisaeng named Jang Nok Soo. To survive as a human being in a strictly hierarchical society, Jang Nok Soo aims to win the heart of an important man. Her tagline reads, “That man… I want to make him mine.”

“Traitor Hong Gil Dong” is directed by Kim Jin Man and written by Hwang Jin Young. The first episode will premiere on January 30 at 10 p.m. KST.