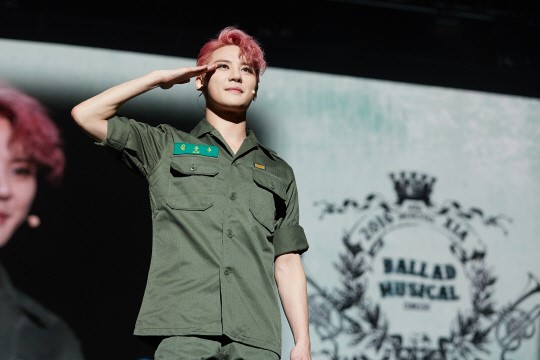 JYJ’s Kim Junsu has made plans for what to do before his military enlistment.

The singer is set to have his last performance in the musical “Death Note” on January 26.

Following the musical, Kim Junsu plans to take a break and rest. He will spend the Lunar New Year holiday with his family and prepare for his military enlistment, which is on February 9.

Kim Junsu will head to the army training center in Nonsan, Chungnam Province. There, he will go through basic training before fulfilling his duties as a conscripted policeman in the special promotions unit of the Gyeonggi Nambu Provincial Police Agency.

His agency stated, “There will be nothing scheduled on the day of his enlistment as he wants it to be a quiet event.”

Kim Junsu will be joined by BIGBANG’s T.O.P, as they are both scheduled to enter the Nonsan army training center on the same day.

Junsu
JYJ
Kim Junsu
How does this article make you feel?