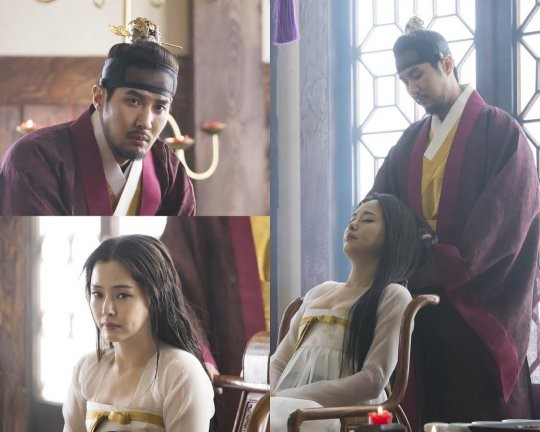 With only a few days left until it finally hits the airwaves, MBC’s new Monday-Tuesday drama “Rebel: Thief Who Stole the People” has released new stills of Kim Ji Suk and Honey Lee.

As previously revealed along with posters of the main characters, Kim Ji Suk plays ruthless King Yeonsangun, who is the foil to Yook Kyun Sang‘s Hong Gil Dong. While he was born with a golden spoon in his mouth, the king is hated by his very own citizens for his oppressive actions.

Honey Lee plays his main consort, Jang Nok Soo, whose actions are reflective of her will to live. A secret she hides is that she actually harbors feelings for a different person altogether.

In the photos, Kim Ji Suk is combing through Honey Lee’s hair, helping her dry it after a bath. This will reportedly be the very first scene they will appear together in the drama. While it may seem like an intimate, romantic act on the surface, it’s very different in reality. Kim Ji Suk’s cold and calculating gaze keeps Honey Lee in place, who can’t help but shiver in trepidation.

The reason behind the chilly atmosphere is their dividing opinions on Hong Gil Dong, an illegitimate son of a nobleman who leads a group of bandits to steal for the common people.

“Rebel: Thief Who Stole the People” will premiere on January 30, at 10 p.m. KST. Check out the trailer below!

Honey Lee
Kim Ji Suk
Rebel: Thief Who Stole the People
How does this article make you feel?