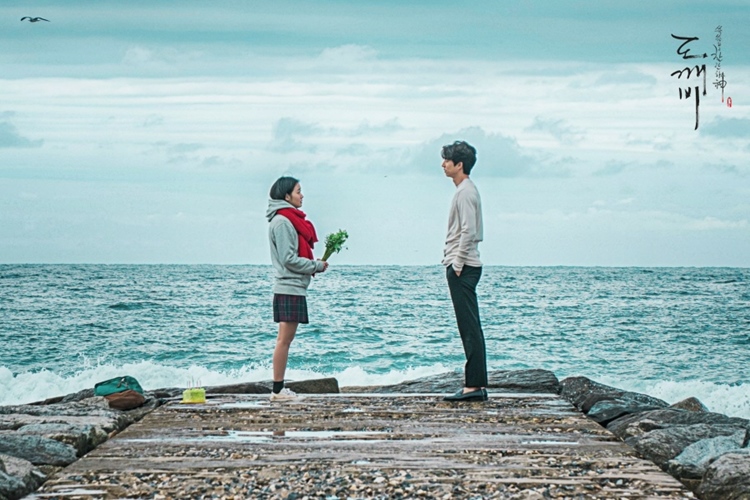 The Top 10 Moments Between The “Goblin” OTP

Every once in a blue moon, a drama couple comes along that changes the OTP game. This was the case for “Goblin.” The romance between the immortal and lonely Goblin (Gong Yoo) and the sweet and eternally optimistic Ji Eun Tak (Kim Go Eun) was an epic one that transcended heaven and earth, spanning decades, continents, and lifetimes. It was strange, beautiful, and hopeful, with wonderfully melancholic overtones. A truly sorrowful love to last an eternity. This is the type of love that pulls at my heartstrings and leaves an indelible mark on my heart, which I fear will never be removed.

There were so many great moments between Kim Shin and Eun Tak, but I decided to choose the scenes that I liked so much, I rewatched 100 times, instead of, let’s say, the normal 90 times. Difficult decisions were made and here are the top 10 moments between Eun Tak and Kim Shin. Just know that my heart breaks because I couldn’t include all of their scenes.

Even though Eun Tak faces the threat of looming death, she, without hesitation, tries to protect Kim Shin by shielding him from the grim reaper’s (Lee Dong Wook’s) gaze. Her first instinct is to make sure that he is safe from the grim reaper, not yet knowing that he is a goblin. This really shows what type of person Eun Tak is and makes it easy to see why Kim Shin would fall in love with her.

First off, drunk Kim Shin is already the most adorable thing to have graced our screens, but then he confesses to having spent his entire existence waiting for her and that she’s his first and last bride because he’s decided that she is. Well then, *swoon*.

The physics of love

Poetry is the food of love and this beautiful poem is incorporated wonderfully into this moment, marking Kim Shin’s realization that he’s experiencing his first love. This scene is exquisitely filmed and elicits those butterflies in the pit of my stomach that bring me back to my very own first loves.

A hilarious twist to a dangerous situation. Instead of calling Kim Shin when she is actually in need of protection from an evil spirit, she summons him for reasons like a flickering street light, because of a ridiculously handsome man (who looks uncannily similar to a goblin we all happen to know), because of a pretty outfit, but really, above all, because she misses him. It is a complete abuse of her abilities, but who cares when they are so darn cute together.

A heartrending scene. Kim Shin is finally able to escape the limbo he was trapped in to return to Eun Tak, but she can’t remember him. It is heartbreaking to see Eun Tak react so strongly to seeing this “stranger,” but not know why. It’s the beautifully tragic notion of the heart remembering what the mind has forgotten, which always gets me right in the feels.

When Eun Tak makes a typo in a radio script, mistakenly writing that the weather is going to be 22°C instead of 2°C, Kim Shin, who can control weather, makes it happen. This is a sweet moment, reminding us that Kim Shin has the ability to make flowers bloom when he’s happy. In this instance, however, it’s not from pure joy; it has a more bittersweet element to it. He can finally see his beloved, but she’s forgotten about him and will no longer run into his arms as he so desperately wishes she would. The petals falls for her, but she’s not aware.

Choosing between all of the different kisses, with their different meanings and level of importance, was like being asked to choose a favorite child: near impossible. However, the hotel kiss made it on this list because I’m a sucker (har) for deep kisses in K-dramaland. This makeout session is so gentle, while at the same time hot as hell. This moment truly encompasses all of the OTP’s pent up desire, passion, and longing for each other.

Using her summoning abilities for sexy time is the best use of her abilities I can think of. Be yo’ naughty self girl and indulge in yo’ man. I mean, if you can’t use your summoning powers for a late night booty call, then I don’t see the purpose in having them at all.

This proposal is so beautiful in its simplicity, but impactful in its sincerity. After begging the heavens for permission to tell Eun Tak that she is his first love, the right day finally comes. *swooooon*

These lovebirds are so damn embarrassing, but that’s why they’re so wonderful together. They complete each other in their cheesiness. Everyone should spend their honeymoon being head-over-heels in love, and performing terrible renditions of love songs.

What were you favorite scenes between Eun Tak and Kim Shin? Share in the comments below!