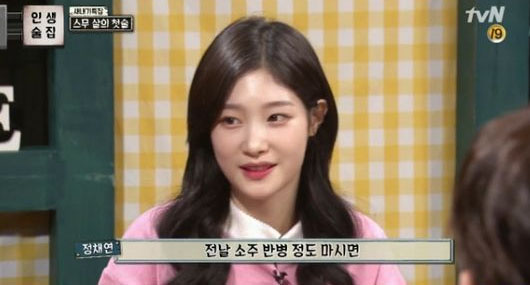 Jung Chaeyeon of girl group DIA is unafraid to be as candid as she wants!

The idol appeared as a special guest on the March 2 episode of tvN’s “Life Bar,” where she opened up about her drinking habits and experiences. She shared that she can probably drink up to a half to whole bottle of soju at a time.

Jung Chaeyeon revealed that she often drinks alone, because “the other members don’t like alcohol, but I get curious about it,” she explained.

As for the food she likes to eat while drinking, the idol admitted that she enjoys steamed egg and chicken gizzards stir-fried with whole garlic cloves. “I also have salmon, and what I usually eat the most is fruit.”

However, one of the most surprising parts of the interview was when she revealed that soju helps her get camera-ready for a photo shoot.

“If I drink half a bottle of soju and sleep before a scheduled pictorial the day after, it reduces swelling [in my face],” she explained.

DIA
Jung Chaeyeon
Life Bar
How does this article make you feel?