From the runways to our TV screens, these heartthrobs went from fashion kings to drama sensations. They’re tall, young, chic, and widely famous – fashion models in Korea are a whole different league of their own. They’re a breed of superstars dominating the magazines and designer shows, but some of them take their career to new heights and go from projecting for the cameras to acting on screen. Veteran models that crossed over to acting include Cha Seung Won, Kang Dong Won, and So Ji Sub. Here is the next generation of aspiring leading men. 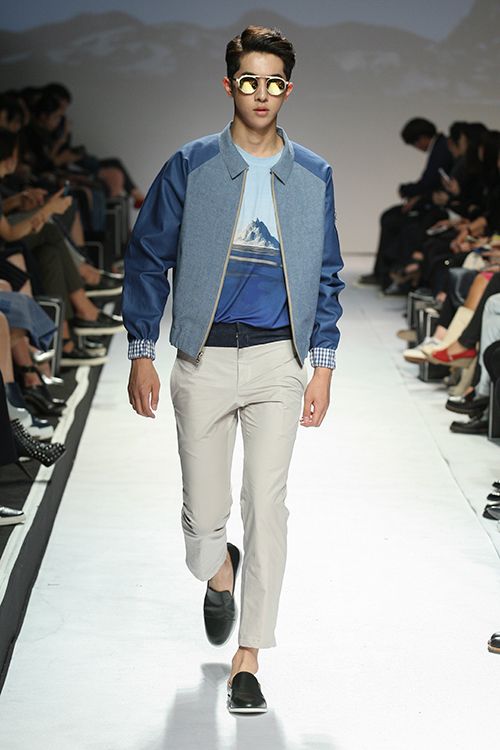 Standing 6 feet and 2 inches tall, Nam Joo Hyuk has the height, physique, and mischievous face fit for a model. He’s a favorite of Korean street designer brands Push Button, SONGZIO, and Beyond Closet, which often get him to walk as the opening model for their shows. One can easily sense his presence on the runways, as he has his own legion of fashion fans, but he stole the show as supporting actor in “Surplus Princess” and “Cheese in the Trap.” He won best new actor for his role in “Who Are You: School 2015,” but he completely won over hearts as the playful, sweet, and incredibly hot swimmer in perhaps one of this year’s cutest dramas, “Weightlifting Fairy Kim Bok Joo.“ His co-star Lee Sung Kyung also hails from the modeling world, and he is close friends with budding actor Ji Soo, who he starred with in “Scarlet Heart: Goryeo.” 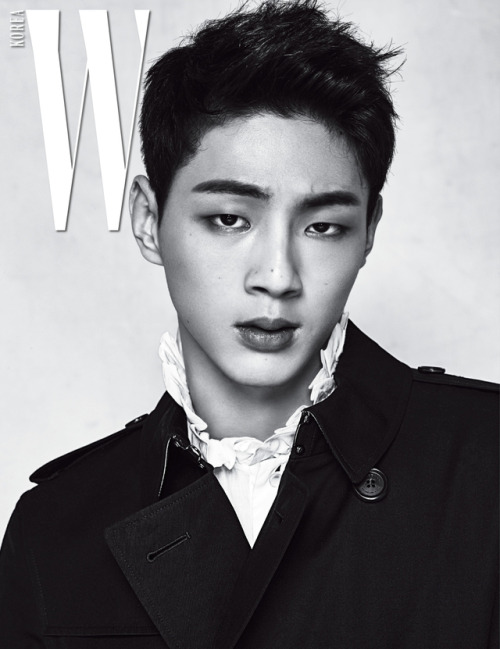 Speaking of Ji Soo, the rising actor rose to fame at a really fast pace this year, and it’s not hard to see why. Having started with JYP Entertainment under the actors department, Ji Soo never really got tremendous attention until he moved to another agency, Prain TPC. He did some modeling in the Philippines, and after a few years, he came back to Manila as the lead in a low-budget indie film called “Seoul Mates.” It wasn’t too long before he caught everybody’s attention with his fierce role in “Angry Mom,” “Sassy Go Go,” “Scarlet Heart: Goryeo,” and his most recent role as a tough talking policeman in “Strong Woman Do Bong Soon.” He plays the bad boy with a sweet side, and even when he plays second leads or cameos, it’s bound to catch every girl’s heart. 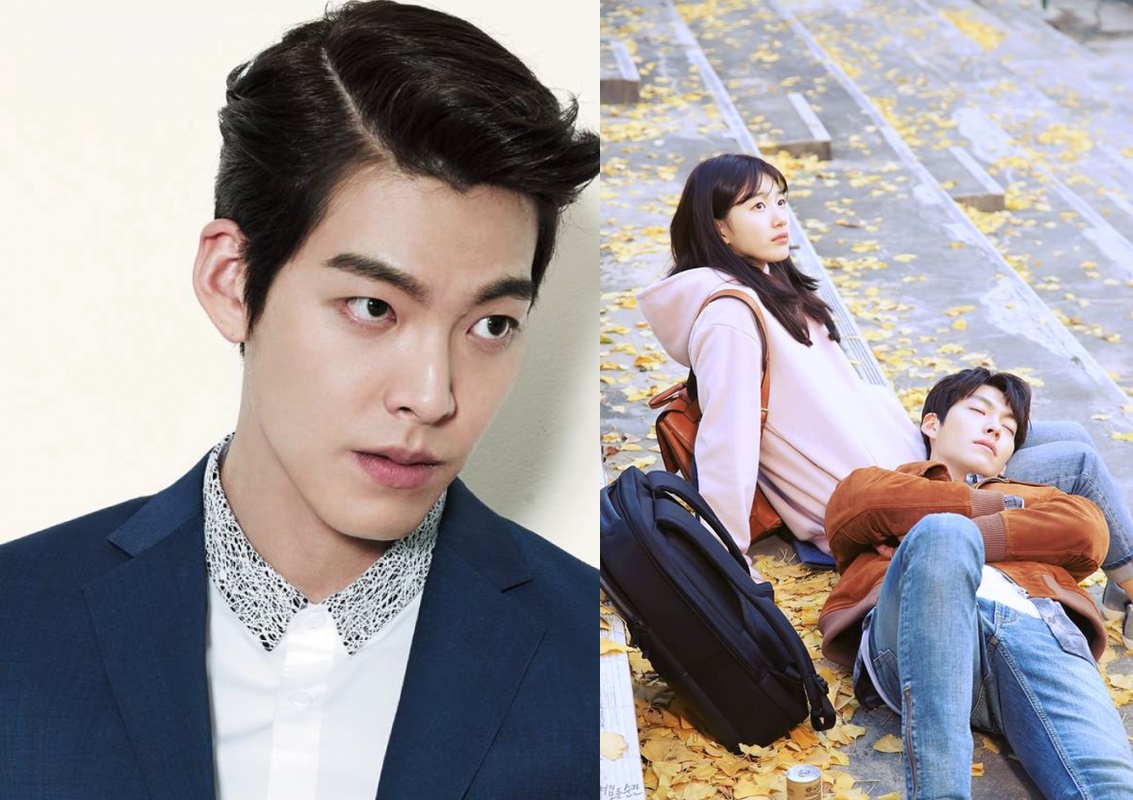 This man needs no introduction — one mention of his name and everybody knows who he is. Even Lee Dong Wook‘s Grim Reaper character in “Goblin” used “Kim Woo Bin” as his fake name. Kim Woo Bin was the breakout star of “Heirs,” and was always known to play supporting characters alongside big name actors (with Jang Dong Gun in “A Gentleman’s Dignity” and Joo Jin Mo in “Friend: The Great Legacy”). Even before that, he was a prominent model in Seoul Fashion Week runways.

Eventually, he studied acting with an acting coach, and soon, fans recognized him for his chic, strong, and manly characters, resulting in the actor eventually landing a lead role with Suzy in “Uncontrollably Fond.” Behind the cameras, his real leading lady is actress Shin Min Ah. He captured her heart doing what he does best: modeling with her for a clothing brand. 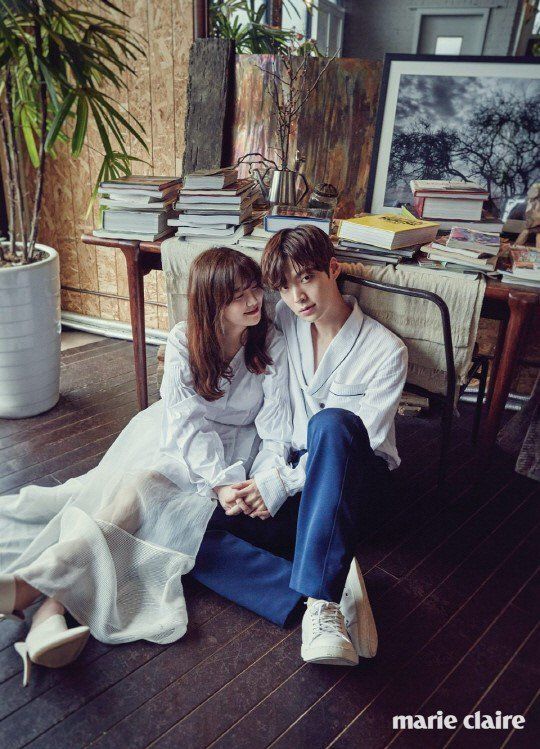 Ahn Jae Hyun is the ultimate ulzzang (“best face”) model to ever cross over into acting. He started as a fashion model in 2009, but he began to get noticed when he starred in music videos for K.Will and Sistar19. What probably made his career skyrocket was when he played the role of Jun Ji Hyun‘s brother in the hit drama “My Love From the Star.” With his fair skin, red lips, and cunning look, he then landed a lead role as a vampire doctor in “Blood,” where he met his ulzzang wife, Ku Hye Sun. See how he makes the perfect husband in the couple reality show “Newlywed Diary.” 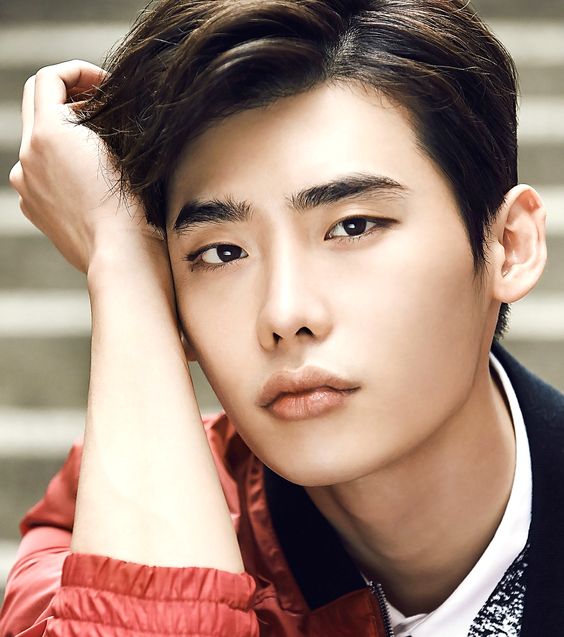 When Lee Jong Suk cries, expect to cry a bucket of tears yourself. His acting chops belie his young age, and he is able to star alongside top Korean actresses like Han Hyo Joo, Park Shin Hye, and Lee Bo Young with ease. He first got famous in “School 2013,” garnering fans for his bromance with co-actor Kim Woo Bin.

He not only has talent for playing complicated and diverse roles, he also has an eye for picking dramas which become national crazes: “Secret Garden,” “I Hear Your Voice,” “Pinocchio,” and “W.” But did you know that he started at the age of 16 as the youngest model for the Seoul Collection runway and that he originally trained to be an idol? His career turned for the better; aside from dramas, he also graces the silver screens in hit box office films. 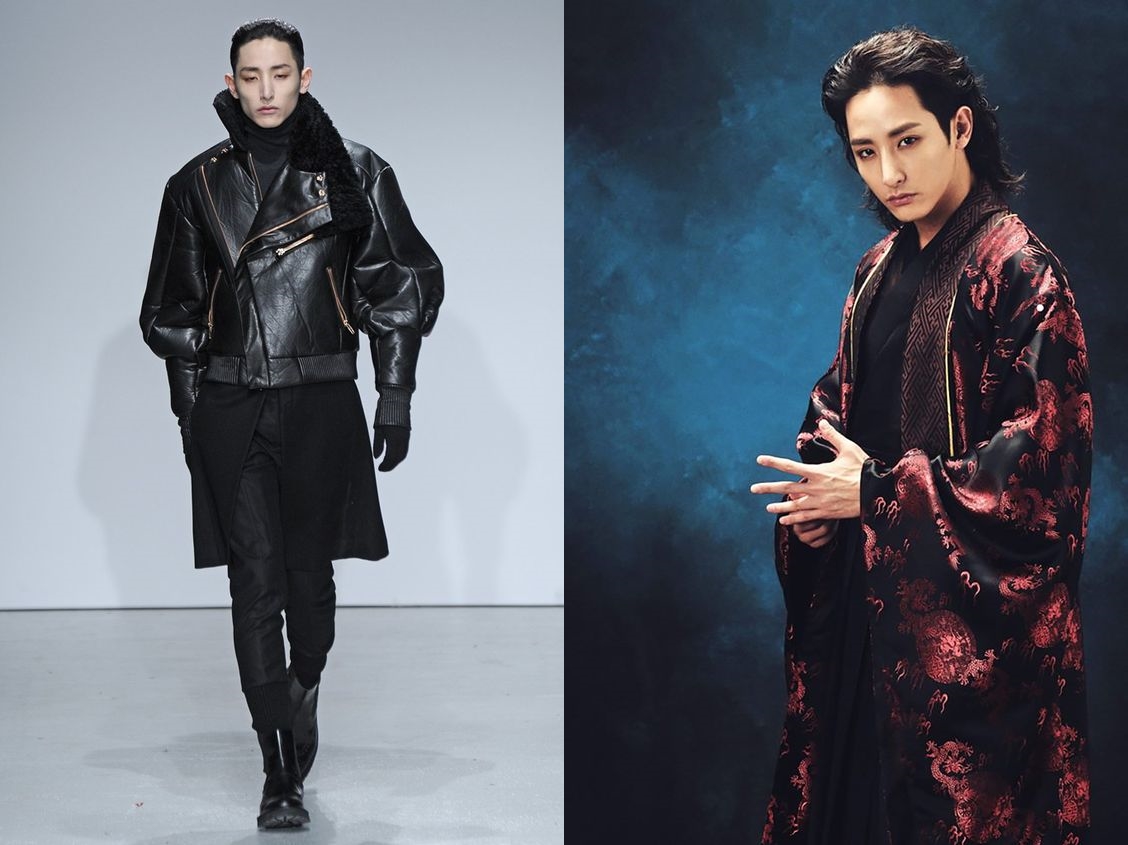 Lee Soo Hyuk is a favorite model of high fashion designers because he has that strange yet beguiling look that makes anything he wears look good and interesting. He has been modeling since 2006, even walking on London and Paris runways. His intense eyes and innately cool vibe landed him in music videos for 2NE1, Gavy NJ, and EXID. His strong features made him perfect to play the lead in “Vampire Idol,” because, let’s admit it, he does look like a sexy vampire. After playing mysterious characters and villains, he is now venturing to lighter roles in romantic dramas such as “King of High School,” “Lucky Romance,” and “The Man Living in Our House.” 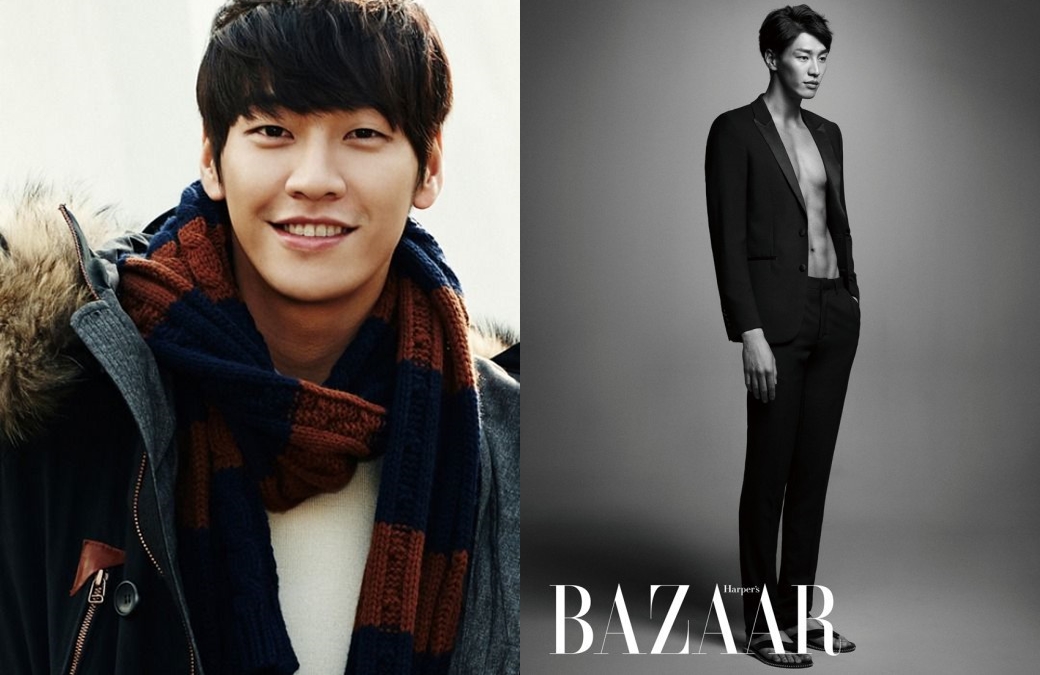 With his broad shoulders, muscular form, and distinct features, Kim Young Kwang made it big not only in Korea, but also around the world. He walked for Alexander McQueen, Vivienne Westwood, Etro, and was the first Asian to walk for Dior Homme. He has a long list of works in his acting portfolio as second lead, often playing nice guys and the ones that don’t get the girl. He even said in one interview that he often gets the roles of “first love” or “the one that got away.” Most recently, Kim Young Kwang played the lead alongside Soo Ae in “The Man Living in Our House.”

Watch “The Man Living in Our House”:

There’s something about bad boys that attract women, even if they know they’re about to cause trouble. Sung Joon has that kind of vibe: bad boy with a heart of gold. Before he stepped into acting, he graced magazine editorials and did fashion campaigns. He looks too cool to play second lead, so he got main roles in “Shut up! Flower Boy Band,” “Can We Get Married?” “High Society,” and “Madame Antoine.” 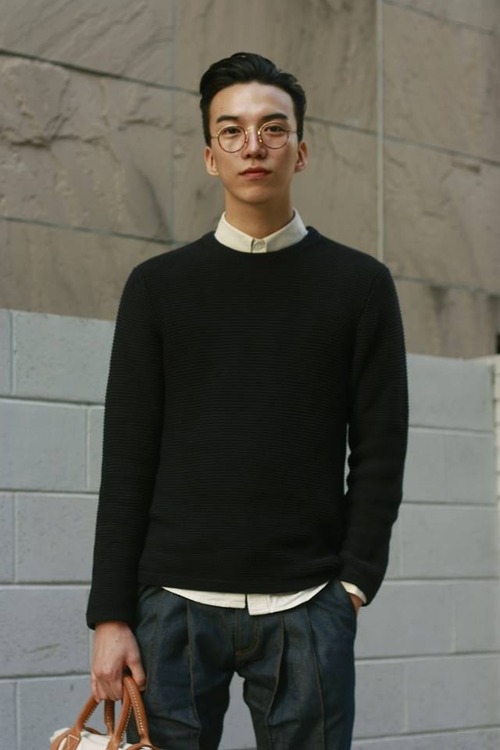 Do Sang Woo is the kind of guy you want to hang out with at the party; he would instantly win over your friends. He is a staple at Seoul Fashion Week, and he actually owns a ping pong and beer bar in Itaewon where his model friends often hang out after shows. He is friends with all the cool kids, from top designers, musicians, to even actress Gong Hyo Jin. He first gained the attention of fans when he starred as her ex-boyfriend in the mega hit “It’s Okay, That’s Love.” He also starred in “My Daughter, Geum Sa Wol.” Pretty sure we will be seeing him as the leading man soon! 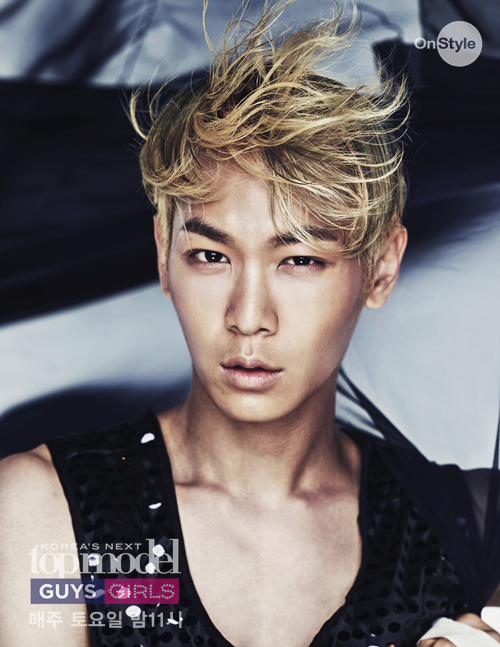 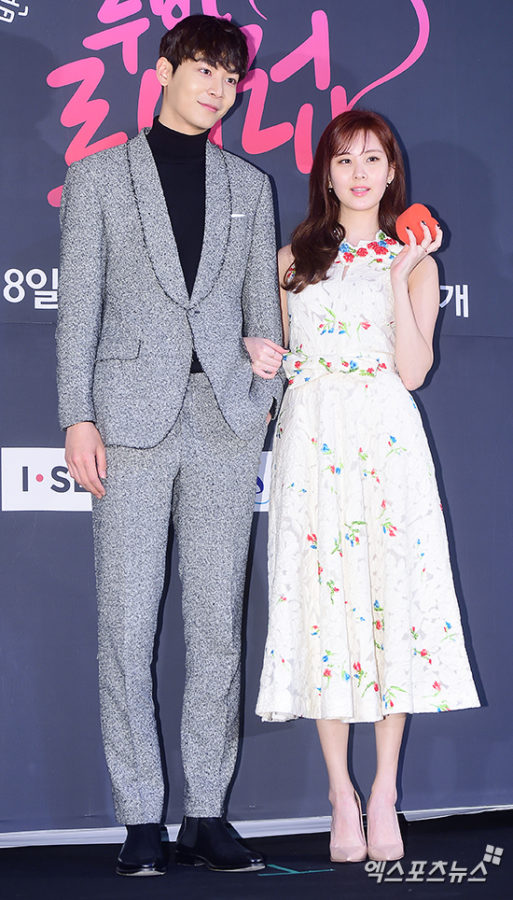 Lee Chul Woo is still relatively unknown in dramaland, but his modeling portfolio is filled with prestigious gigs. He won second place in “Korea’s Next Top Model: Guys and Girls,” and he has been walking the runways of Steve J and Yoni P, Lie Sang Bong, and many others. He got the nickname “little Joo Won” and has also been called BIGBANG T.O.P‘s look-alike. He has the best of both worlds: acting potential and charisma. It also seems like he may be Girls’ Generation’s favorite guy, as he worked with Tiffany on a TV show and is slowly making his way to acting, having starred in a web drama with Seohyun called “Ruby Ruby Love.”

Shon Min Ho may be quite unheard of as an actor, but he is a CF, music video, and fashion king. He modeled for Ralph Lauren, General Idea By Bumsuk, Adidas, Uniqlo, Cass, and others. He starred as Tiffany’s rugged boyfriend in “Heartbreak Hotel” (yes, he’s that handsome badass), Lee Sung Kyung’s sweet boyfriend in Urban Zakapa’s music video, and he is in several indie rock bands’ videos too. He dabbled in acting in a web drama with a fellow model called “Yellow.” If he ever decides to go into full-time acting, he will definitely be one of the next actors to watch.

makinochan is an English magazine writer and fashion fan whose goal in life is to wear heels and find the best OOTD locations while living in the farm outside of Jeonju, South Korea.