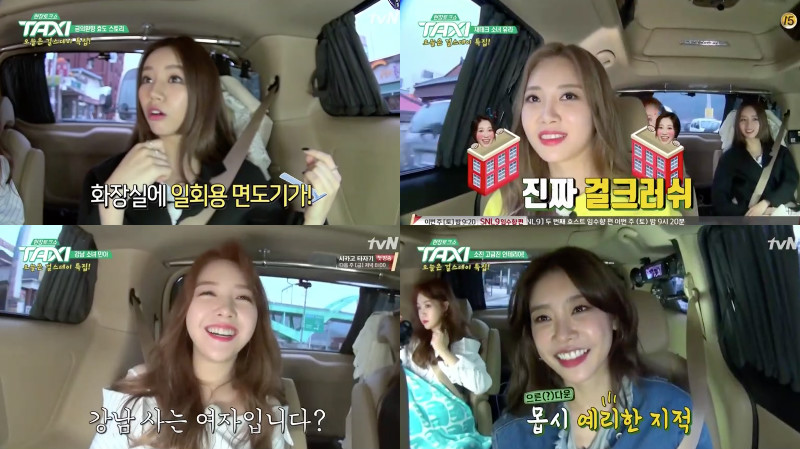 In order to promote their new song “I’ll Be Yours,” Girl’s Day made a guest appearance on the March 29 episode of tvN’s “Taxi.”

During the episode, the members were asked to rank each other by their earnings. Hyeri mentioned Sojin, saying, “I went to Sojin’s house recently and could smell the wealth in the air,” to which Sojin responded, “Are you sure that’s not the smell of free, sponsored items?”

Later, the rankings unveiled that Hyeri had taken the No. 1 spot for the member with the highest earnings. When asked about her nickname, “10 billion won girl,” (approximately $8.9 million) Hyeri quickly clarified the statement and said, “That was how much my company made, not me.”

When Hyeri was asked why she also ranked Minah so high on the list, she explained, “She is the only member living in Gangnam,” which is a very expensive neighborhood in Seoul. Minah quickly defended herself and clarified, “I’m a renter, not an owner. There was a unit that was in urgent need of a tenant so I snagged a good deal with the apartment.”

Following Minah’s statement, Sojin quickly jumped in and said, “Minah’s rent is more expensive than my apartment. When she earns money, she doesn’t spend it. She is able to maintain her savings.” Furthermore, Sojin said, “Yura, on the other hand, is good at growing her wealth. She is interested in investing in real estate. She is rich.” It was revealed that Yura ranked No. 2 in earnings and Yura added, “My hometown is Ulsan. I bought a small building there which is how I am growing my earnings.”

When asked who helps the Girl’s Day members to manage their earnings, Minah said, “My parents help a lot. I recently got my first credit card, and it was such a nerve-wracking moment.” This was very surprising to the hosts because it has been almost seven years since the girls made their debut.

Later, Hyeri expressed how she was able to give back to her family after her success. “I knew what to get my mom because we are both women, but picking gifts for my dad was difficult. I live with my family and I noticed how there was a disposable razor in the bathroom, so I decided to get my dad an electric razor,” she said, showing her affection towards her father.