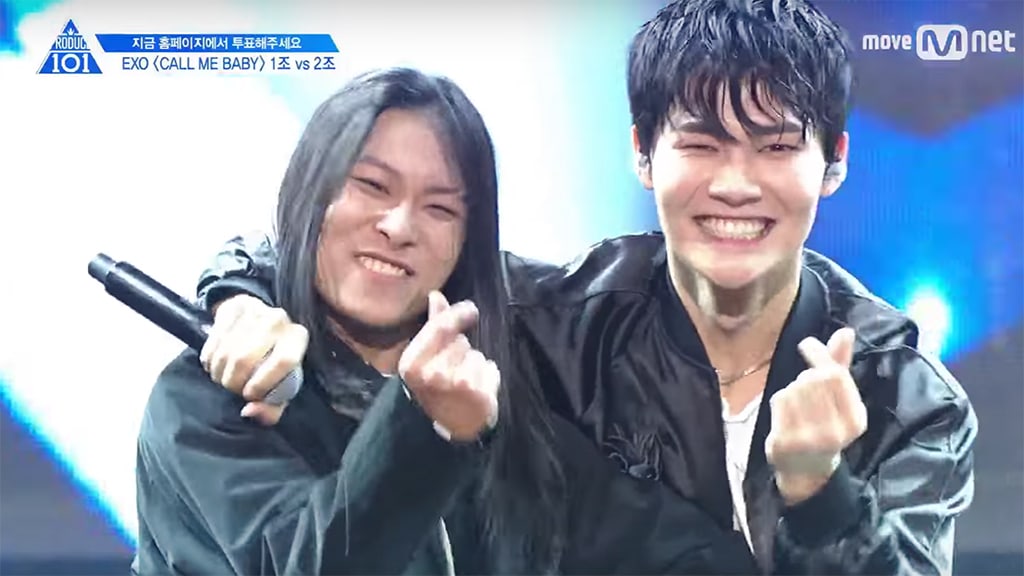 The episode also showed the trainees from the A rank class competing for the highly coveted center spot for their “M!Countdown” stage. The contestants spent an hour creating their own performance for the “Produce 101 Season 2” song “It’s Me (Pick Me) and performed for the other contestants, who then voted for their trainee pick for the center spot. Contestant Lee Daehwi was chosen by a majority of his fellow contestants for the center spot and he couldn’t hide his joy at the results. At the same time, Pledis Entertainment’s Choi Minki began to tear up and he explained, “[Lee Daehwi’s] performance on stage made him shine. I need to do better next time.”

The excitement didn’t stop as the first part of the group battle evaluations was also revealed in this episode. Doing well in the group evaluations is critical to remaining on the show, as contestants ranking 61 through 101 overall will be eliminated afterwards. It was previously revealed that contestant Lee Daehwi would be attempting to create the second “Avengers” group for the group evaluations with trainees Samuel Kim, Ha Sungwoon, Park Jihoon, Joo Haknyun, Bae Jinyoung, and Lee Wuiwoong.

Practice for the group evaluations hardly went smoothly, as there were conflicts within groups, including the “Avengers” team, and center positions were given and taken away in a number of teams by the trainers, who believed that the center the team chose was not doing enough as the center member.

The third episode of “Produce 101 Season 2” revealed the group battle performances for 2PM’s debut track “10 Out of 10” and EXO’s hit song “Call Me Baby,” which you can watch below!

The remaining performances will be revealed in next week’s episode, including the group battle for BTS’s “Boy In Luv,” SHINee’s debut song “Replay,” Super Junior’s hit track “Sorry, Sorry,” and more. Plus, check out the third week rankings for all contestants on the show based on viewer votes here!