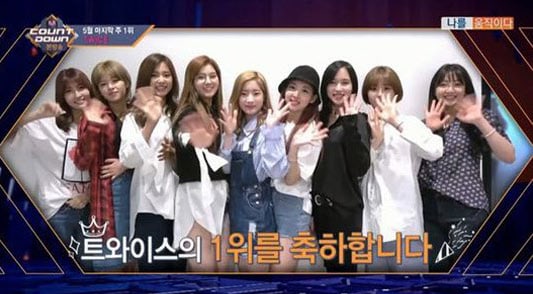 Watch: TWICE Takes 2nd Win For “Signal” On “M!Countdown,” Performances From KCON Japan By SEVENTEEN, Block B, GOT7, And More

TWICE has taken home their second trophy for their latest comeback, “Signal!”

TWICE beat out PSY’s “I LUV IT” on the May 25 episode of “M!Countdown.” Instead of live performances, the show aired performances from KCON Japan this week, so the girls gave their thank-you speeches through a recorded video. TWICE thanked Park Jin Young, who made their title track, as well as their fans, known as ONCE.

Over 30,000 people attended KCON Japan this year, which took place over three days from May 19-21. 27 artists (groups, solo artists and special units) performed at the concerts, including Block B, 2PM’s Junho, GOT7, SEVENTEEN, Apink, PRISTIN, ASTRO, Heize, DAY6, Cosmic Girls (WJSN), DAY6, CNBLUE, MONSTA X, BTOB, and many, many more.

VICTON x SF9 – “You Are So Beautiful”