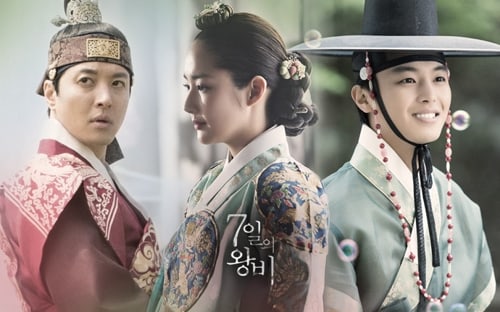 After airing its first episode on May 31, “Queen for 7 Days” has received a positive response and is being known as a “well-made romance sageuk.” Recently, the drama’s relationship chart was released through its main homepage, showing the characters’ status, relationship, and mutual feelings in detail.

At the core of the chart is Park Min Young’s character Shin Chae Kyung as well as the two male leads Yeon Woo Jin and Lee Dong Gun, who play Lee Yeok and Lee Yoong, respectively. The first two episodes revealed that Shin Chae Kyung and Lee Yeok chose each other as their first loves.

Lee Yoong finds innocent and bright Shin Chae Kyung as his “resting place,” while he keeps the Queen Dowager in check. He is also married to the sister of Shin Soo Geun, who is Shin Chae Kyung’s father.

Based on the chart, another female character who has feelings for Lee Yeok has yet to make an appearance. While her face has not been revealed, many are anticipating to see who will play the character Myung Hae, who is the niece of Park Won Jong. 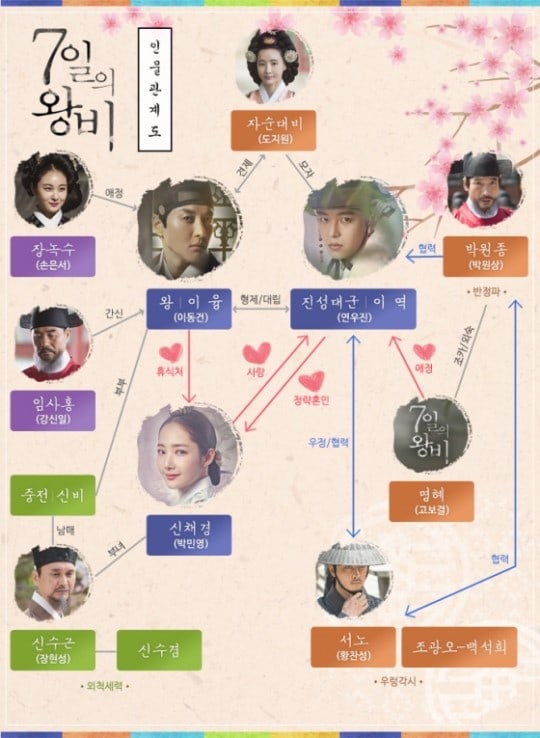 Meanwhile, 2PM’s Chansung plays Seo No, who is both a friend and someone who works with Yeon Woo Jin’s character. The two also end up working with Park Won Jong.

A source from “Queen For 7 Days” stated, “The drama takes historical figures and creates a fully imaginative romance story. It will be very interesting and important to see how the characters’ original relationships change and develop later in the drama.”